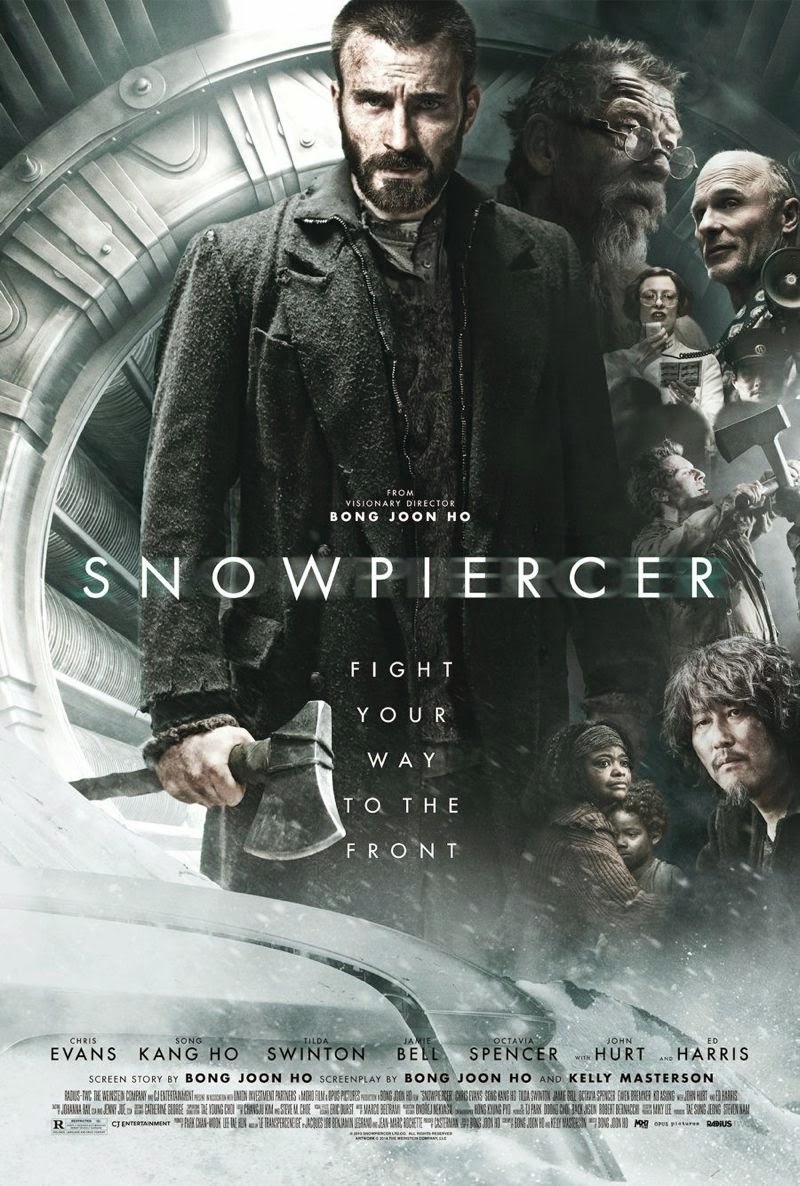 I saw Snowpiercer, South Korean director Bong Joon-ho's English-language debut, earlier this week, and was, as I expected to be, blown away. It is an epic, action-packed, beautifully made, perfectly paced blockbuster. Anyone who enjoys movies and has a stomach for some intense but not overly gratuitous violence will enjoy this film.

I have written before about how much I love Bong's work, and I knew going in that Snowpiercer was going to be well-shot, well-written, and -- most importantly -- character driven. In these areas the film does not disappoint. It is Bong's most grandiose, action-loaded, and spectacular film yet; it is much greater in scale than any of his previous films. For example, The Host (2006), whose action covers many areas across the city of Seoul, is still focused on the fate of one family in that one city.* By contrast, the train in Snowpiercer, despite its linear physical confinements, is literally global in scale: it traverses the world, its passengers encompassing all of surviving humankind. With its expanded, multinational cast and furious, frequently large-scale action sequences driving the plot relentlessly forward, Snowpiercer feels bigger and more kinetic than any previous Bong film. When we catch glimpses out the windows or pull back for a wide exterior shot, the titular huge train moves fast!

I have previously outlined a schema for interpreting summer blockbusters: 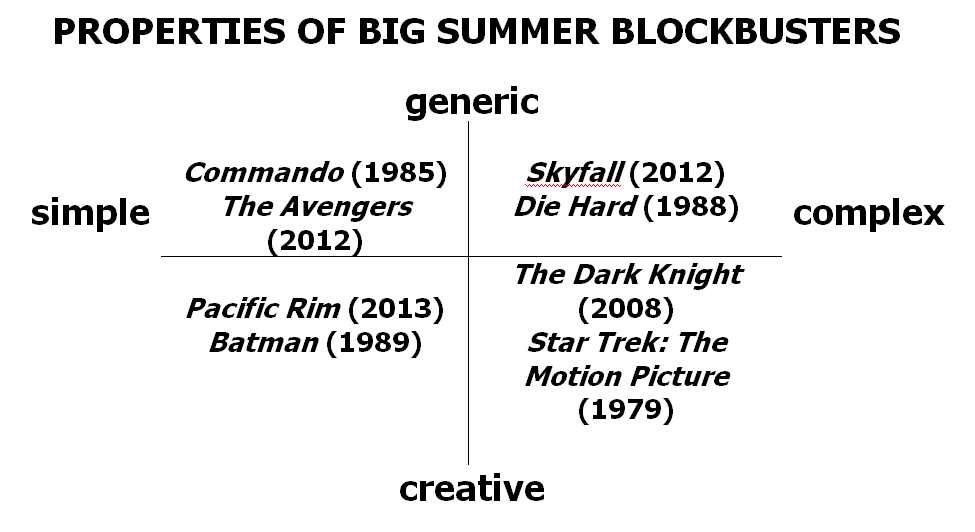 According to this formula, I would place Snowpiercer in the "creative and complex" category, but only barely on the complex side of the line. That is, the film is visually unique and very creatively set-designed, costumed, and shot (i.e., "creative" on the vertical axis) yet actually adheres quite closely to the conventions of the action thriller and does not really allow its plot to twist overmuch -- there is a nice surprise or two near the end, but nothing too complex. No, the film actually earns its "(barely) complex" designation due to the way in which it reveals key plot and character information: slowly and gradually, in layers. The viewer is given certain visual or contextual clues early on, which pay off later when their full nature or importance is revealed. But the main thrust of the story and the action is made very clear from the get-go, and never wavers from its general course.**

This is one of Bong's great strengths as a filmmaker: his keen ability to know just how much to reveal and how much to withhold in order to keep his audience tantalizingly on the hook. Bong has always been good at this but Snowpiercer may constitute his most subtle and refined use of this technique yet. I will keep this review spoiler-free, but suffice to say that one of the best "reveals" in the whole film is a confessional speech made by protagonist Curtis (Chris Evans) just before the final climactic battle. What we learn about our "hero" and his relationships to some of the other key characters in that very effective (and affective) speech adds a whole new layer of complexity and pathos to all we've seen to that point, and brilliantly sets up what's at stake for the final showdown.

Along a similar line, since Snowpiercer is completely character-driven AND is deadly realistic in its depiction of the consequences of violence, there is much at stake here. Many characters perish during the course of this movie. Watching Snowpiercer made me realize that one of the biggest drawbacks of the current vogue for superhero blockbusters is that most superheroes cannot or do not die, so there is rarely a sense of mortal threat or the high stakes that come with risking one's life in those movies. Not so here. As in the Hunger Games films (which this one somewhat resembles tonally) characters we care about in Snowpiercer can and do meet terrible fates, and this only heightens the intensity of the action and our involvement in it.

On top of all this, and most importantly, Snowpiercer is completely involving and entertaining the whole way through. Its running time is 126 minutes (actually fairly short by today's blockbuster standards) but it does not feel long or exhausting. I simply cannot recommend this movie highly enough, especially right now while it's still in theaters. If you enjoy dark, post-apocalyptic actioners like The Hunger Games films (2012 and 2013), The Book of Eli (2010), and Children of Men (2006), then you will surely find lots to enjoy in the tension-filled, visually stunning, and dramatically compelling Snowpiercer. *** 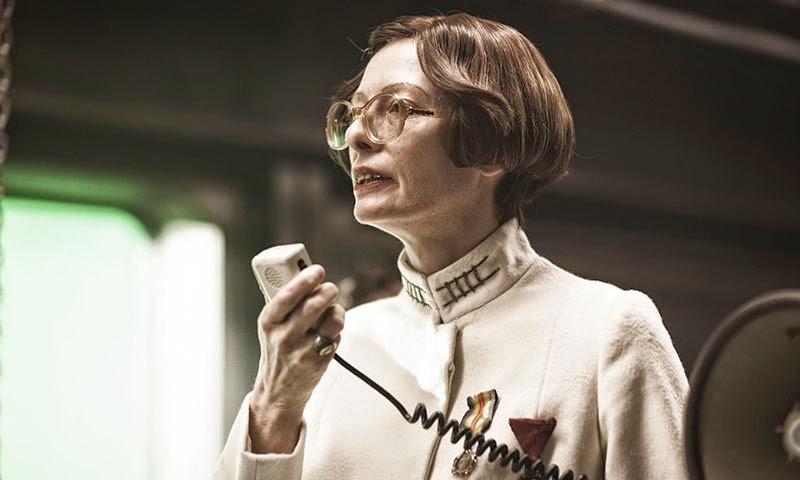 Tilda Swinton plays one of the most interesting and creepy villains ever in Snowpiercer.

Bonus Afterthoughts: While the whole cast of Snowpiercer is quite good -- Chris Evans does a terrific job playing what could have been a very generic-feeling character in a way that makes us care without making him too vulnerable or sentimental, and Bong regulars Song Kang-ho and Ko Ah-sung are both excellent as well -- the real gem here is Tilda Swinton. She just blows her performance away, more or less stealing every single scene she's in. Her Mason is the best, most loathsome villain I have seen in a very long time; her performance alone is worth the price of admission. Also, in addition to several intertextual references to Bong's other films (especially The Host), watch for a very clever and subtle The Shining reference two-thirds of the way in. 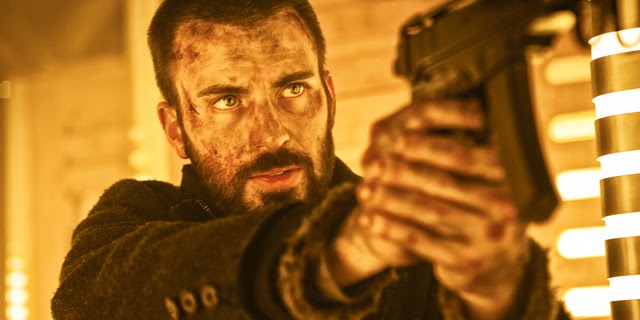 UPDATE 7/7/2014: A friend called my attention to this super-sharp review of Snowpiercer which not only calls the film "an exciting and well-constructed action movie, with more interesting characters and more legible cinematography than the chaotic visual gibberish of CGI and explosions that comprise most contemporary American blockbusters," but also claims that the film conveys a radical critique of capitalism -- a compelling argument I am inclined to agree with.

UPDATE 7/21/2014: Another friend of mine has written this smart review in which she claims, among other things, that "Snowpiercer is the first film I’ve seen since District 9 that takes the tropes of the blockbuster and transforms them into something so compelling that days after seeing it, you stop can’t thinking about it." Indeed!

UPDATE 8/4/2014: My friend A.J. has added his voice to the critical chorus in support of this great film. I urge you to check out his review, whose best line is: "Having recently been on a bus to Brooklyn, NY, I applaud Snowpiercer's attempt to resonate with just how diverse the world of long-distance public transportation really is." Bravo!

UPDATE 8/5/2014: Here is a link to a terrific, well-produced video offering a smart interpretation of Snowpiercer.

--
* Note that Bong's The Host is about a mutant monster who emerges out of the Han River in downtown Seoul and starts eating people, NOT to be confused with the recent U.S.-produced YA film of the same name.
** In this aspect -- the straightforwardness of its plot and the clarity of what's at stake -- Snowpiercer is a lot like last year's Pacific Rim, which I also enjoyed a great deal. The main difference between the two movies is that Snowpiercer's characters are more developed and therefore the stakes are higher when things happen to them. And Bong is probably a more artful and innovative visual stylist than Guillermo del Toro, though the latter is no slouch in these areas himself. I should add that the narrative economy and coherence of both these films -- their strict adherence to the conventions of cause-and-effect, setup and payoff -- place them both firmly in the blockbuster tradition that includes Steven Spielberg and owes a great pre-blockbuster-era debt to the work of Alfred Hitchcock.
*** One of my film-viewing friends also mentioned The Fifth Element during our post-Snowpiercer discussion, and while Besson's distinctive 1997 film is lighter in tone and more generally gonzo than Snowpiercer, I think this is an apt comparison. Another friend name-dropped Pandorum (2009) as being broadly similar in plot but said the latter film is far inferior to Bong's action masterpiece.
Posted by Carter Soles at 8:58 AM