As the sense of scale here should make clear, Guillermo del Toro's
superb blockbuster Pacific Rim is a film you should see in the theater.

I just saw Guillermo del Toro's Pacific Rim last night, and declare it to be one of the two or three best, most enjoyable blockbusters I've seen in the past two years. It is pretty much flawless, in terms of what I want out of a big summer popcorn movie: it is unpretentious, it delivers what it promises, and it even springs a few great surprises I didn't see coming. Most importantly, it is:

We mustn't underestimate the power of #1 up there, because my single biggest complaint about many recent blockbusters, particularly those of the Christopher Nolan stripe, is that they take themselves way too goddamn seriously. They get so bogged down in being "gritty" or "dark" or "serious" that they just aren't any fun anymore. This is why, for me, I rate Joss Whedon's The Avengers and Sam Mendes' Skyfall (both 2012) very highly among recent summer blockbusters, but have not yet been motivated to see this year's Man of Steel. To be fair, even without having seen it I would expect Zack Snyder's Superman movie to fulfill my criterion #2 -- I am sure it is visually stunning -- but personally I just have no interest in seeing a "gritty" or "realistic" Superman movie, especially one scripted by David S. Goyer, who I think is an extremely sloppy and inept screenwriter.

But I digress. What makes Pacific Rim so enjoyable and effective? Well, in order to let you know where I'm coming from, let's consult a chart and define a few terms: 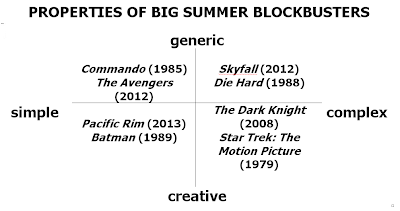 First, complex vs. simple: complex plots twist and turn and rely upon narrative "reveals" or big surprises for their tension. Nolan's films are notoriously complex (some would even say convoluted) and I place Star Trek: The Motion Picture in here as another example of this trend.* The Trek film is quite heady and relies upon a mystery that is slowly revealed to the audience: what the hell is "V-ger" and what is it up to? As in Nolan's films, we (the audience) do not know the answer until/as the protagonists gradually figure it out. Die Hard is the same way: Hans Gruber's plan involves layer upon layer of embedded complexity, and not until very near the end do we understand the full scope of it. Sure, as genre films we know generally how these movies will end -- i.e., the good guys will win -- but we are not totally sure how they will win. Major salient facts are withheld along the way.

By contrast, simple blockbusters are those that make pretty clear from the get-go what is at stake; the plots do not depend upon mystery or surprise quite so much. Films like The Avengers and Pacific Rim are of this stripe: there is some major bad guy who needs to be clobbered, but the exact nature of his plans are not really all that important -- usually they can be summed up as "wants to end / rule the world." In Pacific Rim, we know what the film's climax will be about ten or twenty minutes into the movie: Marshal Pentecost (Idris Elba) tells us what the big mission is going to be, and the rest of the film involves our team of heroes fighting defensive battles until their moment arrives to execute that plan. There are a few minor twists but they do not sway us from (or materially change the circumstances of) that Big Battle scheduled for the end of the picture.

Now to the other axis. By "creative" I do not mean complex plots, but rather a visual style and/or tone that differentiates the film from other blockbusters of its type. I guess I mean authorial stamp to some extent, but remember that I am NOT talking about totally violating or hybridizing a genre either, just playing within a genre in a way that makes it appear fresh, e.g. Tim Burton's use of gothic sets and a carnivalesque tone for his two Batman films in 1989 and 1992. Nolan's recent films are also "creative" in this sense, he being the director widely credited with bringing a "gritty," "dark" tone to superhero blockbusters.

"Generic" means films that adhere more closely to the established parameters of their genre, with less evident authorial flourishes or deviations in tone or visual aesthetics.

Please note that I do not privilege "creative" over "generic" -- I have great admiration for films that hew closely to genre conventions but still make the viewing experience exciting. In fact, one of my favorite recent blockbusters, The Avengers, is extremely conventional with respect to plot and other conventions of superhero films, but it does its thing with such witty panache and delightful character interactions that it is completely successful even though it is visually and structurally unremarkable.

"We may not be complicated, but we're fun!"

In his rather scathing review of Pacific Rim, Buffalo-area author and filmmaker Greg Lamberson writes that "there is no real climactic fight that tops everything that came before it, but a corny finale that's telegraphed as soon as Elba comes on screen. Epic fail." However, as I argue above, Pacific Rim's ending is not an epic fail -- though perhaps it fails to be epic -- but rather is exactly what the film promises to deliver given its setup. I for one am rather tired of the notion that the final battle in a blockbuster has to be "bigger" or "more epic" than anything that came before -- I just want it to dramatically resolve the plot of the film. Epicness is overrated.**

Lamberson also states that "not one single character is interesting." Though I disagree with this, I think that in broad strokes it is an accurate statement if not a reasonable one, by which I mean that I would not personally expect del Toro to fully round out his characters and complicate his plots when making a superhero movie like Hellboy or a big summer action blockbuster like Pacific Rim. The generic ground rules and audience expectations here are totally different from those we would expect from artsy psychological thrillers like The Devil's Backbone and Pan's Labyrinth. And frankly, I enjoyed Pacific Rim's characters even though, like Lamberson, I did not find them to be psychologically complex. How many blockbuster protagonists truly are? None that I can think of.

Nevertheless, I accept as a valid critique the notion that some of the key characters in Pacific Rim are not well-rounded enough. Again, I think this is a function of the type of movie it is -- a "simple" blockbuster -- and this factor did not strike me as a major deficiency as I watched the film, yet I admit that would like to know more about the world in which Pacific Rim is set. Maybe, if we are fortunate, we will get a sequel and / or a prequel, as this reviewer suggests.

All that said, I agree with Lamberson that del Toro has set a very high bar for himself with his early films -- I love them a lot and would argue that Pan's Labyrinth definitely belongs on Entertainment Weekly's "100 All-Time Greatest Films" list. But my expectations for Pacific Rim were not directly informed by del Toro's amazing earlier works, except in one specific sense: I assumed the film would be a visual knockout, which it is. The world of Pacific Rim feels very lived-in and "real." With a great many scenes shot at night, Pacific Rim is visually evocative of Blade Runner or Hellboy II, and I love it for its noir-inspired cinematic richness.

Yet despite its dark lighting and post-apocalyptic mise-en-scene, the film's general tone is light, peppy, and fun. I appreciate this very much. While I TOTALLY agree with Lamberson's sentiment that in general, blockbusters these days are running way too long, Pacific Rim never dragged for me the way the second two Lord of the Rings films or the third Nolan Batman film did. Sure, there isn't much laugh-out-loud humor or witty inter-character verbal sparring as in The Avengers, but Pacific Rim does feature a few really fantastic visual gags -- my personal favorite of which involves one of these: In his own lukewarm review, Entertainment Weekly's Chris Nashawaty says of Pacific Rim that "del Toro's monsters are so big, and shot in such unrelenting rainy darkness, that the audience never gets a chance to dissect and fetishize their monstrous anatomies and be swept away by their weirdness." Reading that, I think Nashawaty must have seen a different movie than I did.*** I felt like the film moved pretty quickly from set piece to set piece, spending most of its running time on those spectacular monster battles -- in sum, the film does not skimp at all on mind-blowing, beautifully choreographed and well-shot action sequences. And for that reason alone, I urge my readers to strongly consider seeing Pacific Rim while it is in theaters. It may not be perfect, and it obviously does not "hit the spot" for every (re-)viewer the way it does for me, but it is well worth your time to check out, as del Toro is head and shoulders above most other blockbuster directors in terms of the lushness and lived-in "reality" of his visual style. 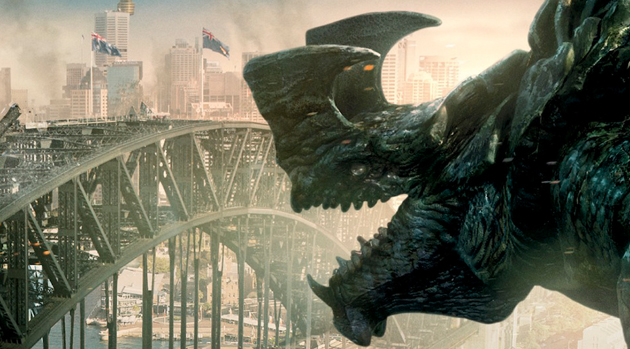 The kaiju sez: "Come see my movie or I'll crush your civilization!"

UPDATE 10/14/2014: British critic Mark Kermode agrees with me and has some very smart things to say about what makes Pacific Rim great in the linked video.

--
* I realize that this is a bit of a cheat on several levels. For one, Star Trek: The Motion Picture was not released in summer, but December; also, it is not an "action" film, as summer blockbusters, by definition, are. Yet it is a big-budget picture that was released "wide" in an attempt to cash in on the popularity of Star Wars, so I include it here as a representative of some of the trends I am attempting to illustrate.
** For a cheeky yet accurate discussion of this "epicness" problem in contemporary blockbusters, check out this video review of Man of Steel, especially the part near the end where the reviewers discuss the difference between Snyder's film and Superman II (1980).
*** UPDATE: Since writing this review I came across this article about possible Pacific Rim sequel ideas which includes this illuminating (ha, ha) comment: "My main issue with the dark visuals of Pacific Rim are probably the fault of the 3D projection at my cinema more than the cinematography." This may indeed explain a lot, including Nashawaty's review, assuming he saw the picture in 3D, which notoriously darkens the image. By contrast, I saw the film in 2D -- wearing 3D glasses always gives me headaches.
Posted by Carter Soles at 8:40 AM