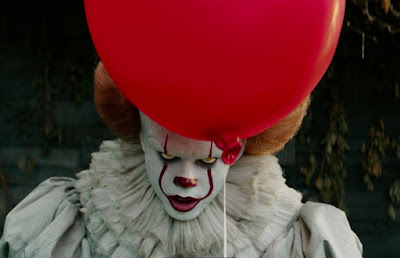 I saw It and I mostly really enjoyed it. I am a fan of Stephen King's original novel -- I think it is his best work -- and feel that despite a couple of sad blunders, the recent film adaptation (which its closing credits make clear constitutes "Chapter 1" of a presumed two-parter) is about 80% what I would want to see out of an adaptation of a horror epic this nuanced and great. I would probably even watch it again someday, and I intend to see the sequel. My review:

In the theater where I saw It, it opened with video footage of Stephen King in a neutral studio setting introducing the film and saying how blown away he was by director Andy Muschietti’s adaptation of his favorite work. Now I love Stephen King, both as a pulp author and as an irascible left-centrist public figure, but he seemed downright awkward in this introduction video. He was clearly reading from a teleprompter -- I could see his eyes reading and I think I saw the teleprompter screen reflected in his glasses.

King has always had a fraught relationship with film adaptations of his books, famously despising the very best one, Stanley Kubrick's The Shining (1980), even making a TV miniseries version in 1997 as a kind of public "I'm taking it back" gesture. And as A.O. Scott notes, a great many King adaptations are mediocre or worse, so maybe this isn't a very high bar. But it was interesting to me that someone took the time to film this footage of King and place it up front -- King subtly asserting his authorship? A precautionary measure to assure audiences this isn't another Dark Tower (2017) fiasco?

Anyway, horror fans or King fans should go see this film. It is fun and mostly scary, though a couple of the clown attacks are so over-the-top as to be silly rather than convincing (including, IMO, the first one). The final battle is, as Scott correctly states, boring and unaffecting: "The climactic sequence of It sacrifices horror-movie creepiness for action-movie bombast." And obviously, as I've said, big sexism and racism alert. But It is worth your time for the cinematography, a few scares, and Richie's one-liners alone.

Richie sez: "If you don't like this movie you can fuck off!"