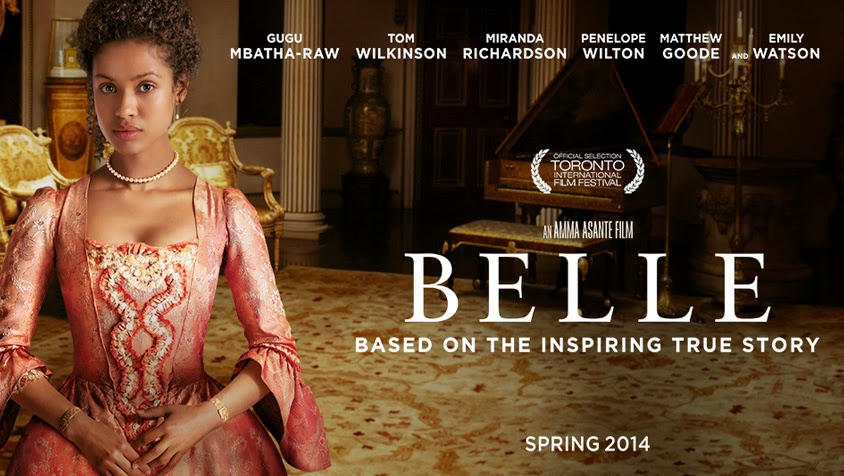 I saw the sharply written and vividly directed historical drama Belle at the Cinema Theater in Rochester last week, and enjoyed it very much. While conventionally shot, the film is superbly scripted and the performances throughout are absolutely top-notch. Belle dares to take on a complex and thorny subject -- the social status of a mixed-race woman of illegitimate yet aristocratic birth in late-eighteenth century England -- and does so in a way that is both emotionally compelling yet never heavy handed or melodramatic. The film achieves a consistent level of nuance and intelligence of script that, say, Spielberg's structurally similar Lincoln (2012) only lands upon quite spottily. This is quite a feat.

I think the critical press liked Belle but, due to unconscious, gendered generic bias, some didn't quite see it for the accomplishment it truly is. For example, I agree with most of the concrete points made by Chris Nashawaty in his review, especially the notion that


the message is clear: Women during this time were, like slaves, property to be auctioned off, making Dido doubly powerless. The added irony is that although she has a sizable inheritance, she's considered less marriageable than her penniless white cousin. [. . .] Belle subtly skewers the absurd rules and hypocrisies of class.

Yes. Yet I must take slight umbrage at Nashawaty's description of Belle as "like a Jane Austen novel spiked with an extra shot of social conscience" and his subtle implication that the best thing -- or maybe the only truly noteworthy thing -- about the film is Gugu Mbatha-Raw's performance in the title role.* That performance is indeed excellent, but Belle (the film) is much more than a politically charged take on the social milieu popularized by Downton Abbey. The film is a serious examination of a key historical moment in interracial politics and should be discussed alongside other recent films on similar themes like Lincoln (to which Belle is superior) and 12 Years a Slave (2013).

Like the more formally daring yet psychologically excruciating 12 Years, Amma Asante's Belle grapples with larger historical events -- in this case, the pre-abolition Zong Massacre case presided over by Lord Mansfield (the superb Tom Wilkinson) in 1783 -- by telling the story of its protagonist's immediate experiences during this politically charged period. Belle (called Dido by her family) is the niece of Lord Mansfield and she begins to take an interest in the implications of his case as she experiences the personal difficulties of "coming out" to London society (coming of age and going on the marriage market) alongside her white cousin, Elizabeth (played with great nuance by Sarah Gadon). 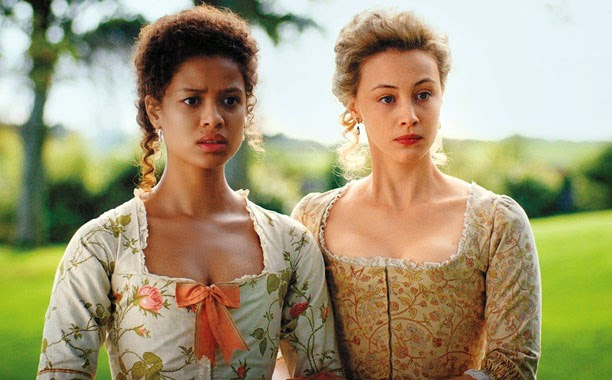 
The film assiduously avoids going melodramatically over-the-top, either in its dealings with race issues or in its romantic subplot. This alone elevates the film above Spielberg's similarly themed films Amistad (1997) and Lincoln -- Spielberg is one of the most technically assured filmmakers alive but he frequently indulges in moments of melodramatic treacle that diminish the impact and import of his otherwise thematically "serious" late-career films. Belle, conversely, exercises restraint throughout and is far the better for it.

Further, it must be said that the romantic plot is indeed quite sub in Belle. The main events here are Dido's unfolding relationships with her family: Elizabeth, Lord Mansfield, and her pragmatic-but-never-draconian mother (Emily Watson). There is a romantic interest, and since a woman's marriageability is a key concern of ALL the characters and of that sector of society at that time, some (re-)viewers could mistakenly assert that the romantic plot SHOULD be more dominant and/or that the film is weakened by its lack of florid, romantic scenes of the kind one sees in other types of movies set in this time period. But no, there is no Colin Firth in a wet shirt moment in Belle, because this film is much more interested in the political plight of women in 18th century Britain and how their circumstances resemble, differ from, and intersect with the plight of slaves at the same time. All these difficult issues are effectively and brilliantly worked out through the evolving personality and paradoxical social position of Dido.

Finally, I would suggest that Belle is worth watching not only because the film itself is so good -- much more serious and sharp than Lincoln yet far less excruciating and experimental than 12 Years -- but also because it is a film written and directed by women of color. This such an extreme rarity in the mainstream film business that I would probably urge folks to support this film even if it was less than excellent. Luckily, I don't have to. Asante directs not just Mbatha-Raw but her whole stellar cast to fine, compelling, nuanced performances that are both emotionally involving and thought-provoking. I thoroughly enjoyed Belle, I was gripped by it, and it made me think. I recommend it to anyone who enjoys a character-driven film featuring world-class acting, assured direction, and a flat-out excellent script.** 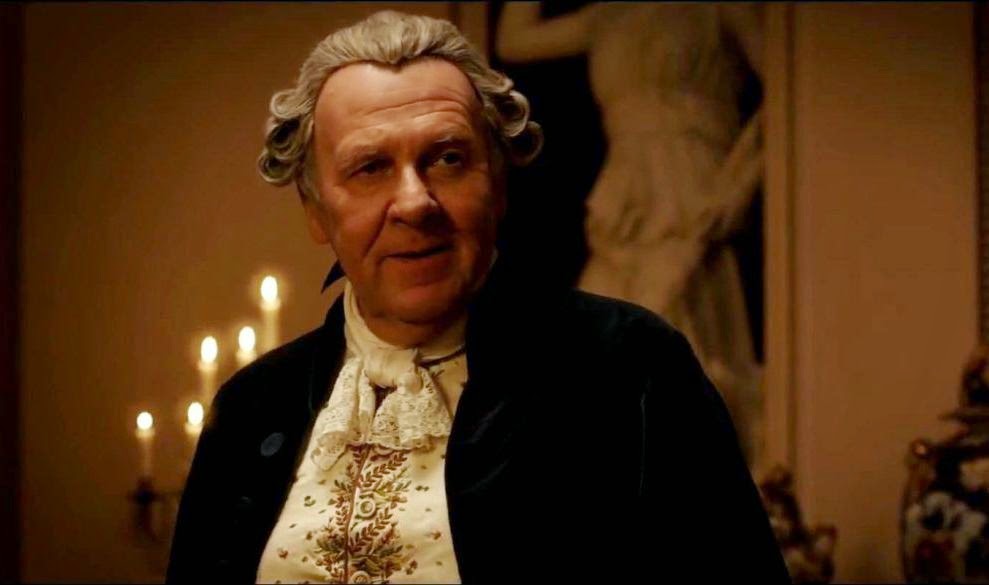 Tom Wilkinson says: "Hey, old chap -- I give an excellent performance in this movie, too!"

--
* An expert on 18th-century British culture and literature to whom I am close says that this phrasing of Nashawaty's is itself misleading, since Austen's novels are in fact laden with sharp political critique. According to my expert, Nashawaty is making the (all too common) mistake of reading Austen's novels very superficially -- as light, witty romances, rather than as the multi-layered, socially critical, and politically engaged works they actually are.
** I am happy to say that both the New York Times and Guardian reviews concur with my view that Belle balances its elements nearly perfectly.
Posted by Carter Soles at 1:25 PM