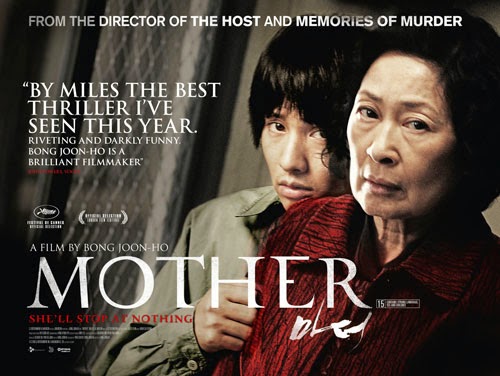 Some while ago, in a post discussing several contemporary (and active) directors I feel are worth every filmgoer's time, I concluded with an "Honorable Mention" shout-out to Bong Joon-ho, my favorite South Korean director.

Since posting that, I have now seen Bong's 2009 thriller, Mother, and my estimation of his talent and abilities has only increased as a result. I am immensely fond of his two previous feature-length works, 2003's Memories of Murder and 2006's monster movie The Host, but now I might have to claim Mother as my favorite.

In fact, my initial reaction to Mother was documented via an email exchange I had with a good friend familiar with Bong's films:


ME: In prepping for teaching Bong this week I finally watched Mother a couple days ago. Literally the best movie I've seen in years, with the best "twist"/reveal EVER!

FRIEND: I feel the same way. The most unique and arguably subversive take on monstrous motherhood I've ever seen, especially given the title character's star text as a popular character actor who mainly played lovable moms on Television. I think it's an important film to juxtapose with The Host to understand Bong Joon-ho as an auteur.

ME: I think it is the greatest deployment of "trick" point of view and generation of audience sympathy since Psycho. And I agree that it pairs well with The Host as a precis on parenthood.

As this dialog (and my profile on the sidebar) reveal, I am a professor of film studies by trade, and in my "Film History Since 1945" course this spring semester, I taught a week on "The Global Blockbuster" which required the students to watch The Host. I have seen and taught that film many times and it is always a big hit with students. Not only is it a superb monster movie, it also functions as a kind of over-the top family melodrama about a slackerish dad who spends the whole film trying to make up for the fact that his carelessness leads to his daughter's being taken by the river monster in the movie's first act. The redemption of this father character is a primary theme in The Host, and is handled as well as (if not better than) the father-son sequences in Spielberg's Jaws, a film to which The Host is frequently (and favorably) compared.


Yet my appreciation for The Host was enhanced by seeing Mother. As its title indicates, the movie is a suspense thriller about the investigative efforts of the single mother of a young man named Yoon Do-joon. The son is arrested and  incarcerated for the murder of a neighborhood schoolgirl. The local police all believe they have their man, but Do-joon's mom never wavers in her faith that her son is innocent of the crime, so takes it upon herself to conduct her own dogged investigation of the events leading up to her son's arrest. The result is nail-bitingly suspenseful, beautifully shot, superbly acted, and ultimately revelatory in its brilliant deployment of a narrative "twist" that is not so much a twist as a catharsis for the characters and viewer alike. I am not kidding when I say in the email exchange above that Mother contains one of the best "reveals" I have seen in any film since Alfred Hitchcock's Psycho (1960).

Do-joon's mother makes a crucial discovery during one of
Mother's most suspenseful scenes.

Like Hitchcock before him, Bong seems to have no great esteem for cops, for they often come across as corrupt, buffoonish, or a little bit of both in his work. This is a theme that ties Mother to Bong's 2003 serial killer mystery thriller Memories of Murder -- the cop protagonists of the latter remind me very much of the supporting police officer character in the former, and even though we are meant to sympathize with the two cops in Memories, the ending of the film tells us a lot about how Bong feels about the ways and means -- and ethics -- of police work in his home country. 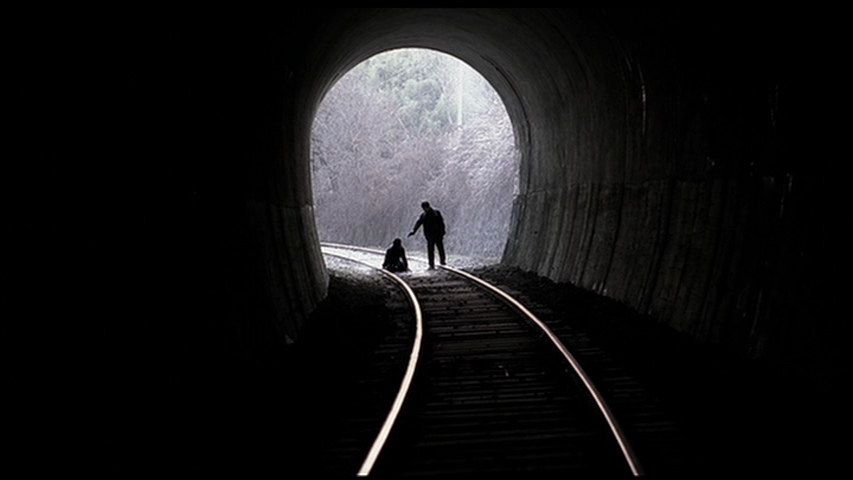 One of the last shots of Memories of Murder, in which a police officer
is shown possibly abusing his position of authority.

Similarly, cops and government officials are not to be trusted in The Host -- in that film, Gang-du's extended family bond together to rescue his daughter Hyun-seo, all the while evading the police and military personnel who would impede them in their morally necessary task.

All three films echo each other in certain ways: always there are young girls in danger, and always a different type of protagonist -- two cops, a father and his siblings, a lone mother -- seeks a solution to the crime and and end to the threat posed to the children. All three are strongly envisioned, well-scripted genre pieces (two crime thrillers and one monster movie) into which elements of family melodrama are artfully woven.

And then there are the visuals. The screenshots I've included here really cannot do justice to how beautifully shot and edited Bong's films are. No fetishist of the long take, Bong nevertheless knows when to allow for thematically appropriate long takes, as in the opening and closing shots of Mother or in the incredibly long steadicam shot that wends its way through the police station (and eventually outside to the parking lot) partway through Memories. Bong and his cinematographers Kim Hyung-ku (Memories and The Host) and Hong Kyung-pyo (Mother) are amazingly artful in how they compose shots, yet they never let that artfulness impede the forward momentum of these films' suspenseful, exciting scripts and plots.* 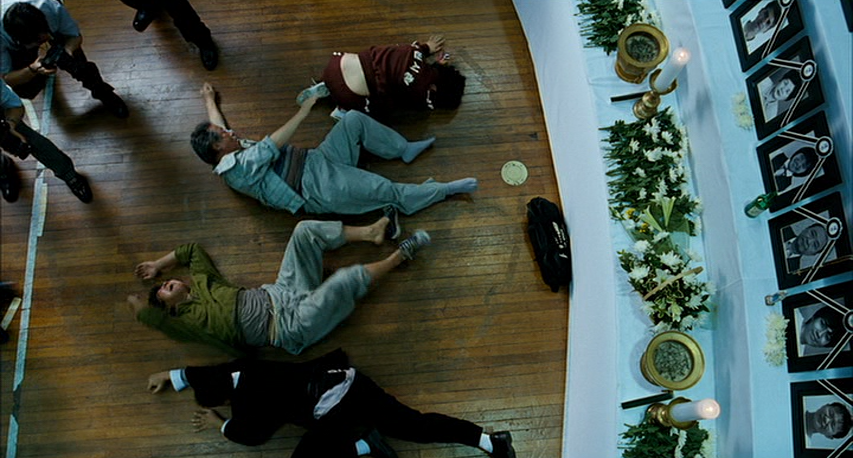 One of the funniest moments from The Host, in which Gang-du's family writhes around
on the floor in an expression of over-melodramatized grief.

The last component of Bong's work that really stands out for me is his sense of humor. Even in the middle of the direst of situations, Bong always allows for some silliness and human foible to leaven the tone a bit. In fact, one of the director's great gifts is his ability to introduce comedy without allowing it to puncture or nullify the suspense. This is perhaps especially true of The Host, which features the most outrageous comedy moments of any Bong film I've seen, yet also maintains its sense of paranoia and doom throughout, and even includes a few genuinely tragic and touching moments as well. Some of these involve character deaths so I won't spoil them, but my favorite of The Host's touching-yet-comedic scenes is when Gang-du's father explains to his other two grown children why they should cut Gang-du some slack and respect him, describing with great pathos how Gang-du suffered from malnutrition as a child. At the culmination of the father's speech, Bong cuts to the two siblings, revealing that they are asleep and not listening to a word of this profoundly moving speech. This is a moment that is both funny and subtly reveals the film's deeper agenda, which is to unfold that background information about the hapless Gang-du to us, the film's viewers.

It is artful touches like this, combined with Bong's films' sense of excitement and fun, that leads me to recommend his work to anyone who enjoys well-made suspense and/or monster films. Last I checked, The Host was streaming on Netflix, in Korean with English subtitles -- the DVD editions of Bong's films come subtitled AND dubbed.

"I gotta get out of here and go see Bong Joon-ho's latest film!"

UPDATE 8/5/2014: Here is a link to a superb video analyzing many of Bong's visual techniques in Mother.

--
* The closest comparison I can make to an English-language director's work is probably to that of David Fincher, who, in most cases (including Alien 3, Se7en, Zodiac, and The Social Network but possibly not the hyper-stylized Fight Club or a few indulgent moments in the generally underrated Panic Room) lets his films' stories and characters drive things forward, interwoven with an abundance of rich visual artistry to be incidentally enjoyed along the way. Fincher also seems to like to work in the suspense thriller genre like Bong does.
Posted by Carter Soles at 4:09 PM