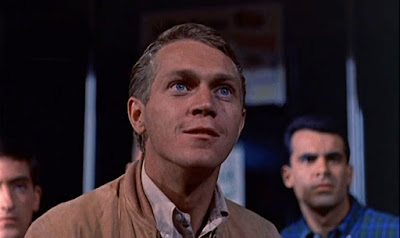 I am a self-proclaimed horror movie fan. As a devotee of the genre, I love its towering canonical classics (the 1930s Universal horror films, Gojira, Night of the Living Dead, John Carpenter's The Thing), its overlooked but easy to defend hidden gems (Martin, The Descent, Candyman), and even its schlocky fringe entries (Haxan, Hollywood Chainsaw Hookers, Mountain of the Cannibal God) on the border between horror and comedy.

Of course I don't love every horror film I watch (e.g., most of the recent remakes of 1970s classics), and there are horror films I deliberately avoid (e.g., Human Centipede).

But I really enjoyed The Blob. I was aware of it, of course, but never got around to seeing it until a couple weekends ago -- as part of the Criterion Collection, it streams on Hulu Plus. It is a fun, well-constructed monster movie combined with a teen exploitation melodrama. It is infused with 1950s Cold War paranoia (the titular Blob is red after all) and sublimated teen sexuality. The movie maintains a fast clip and uses its studio-set mise-en-scene evocatively. 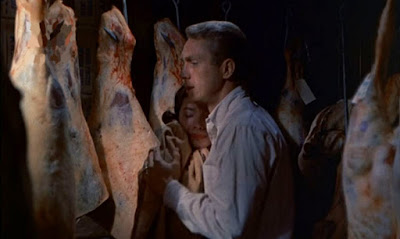 Check out the spooky meat locker!

A very young "Steven" McQueen plays protagonist Steve, a morally upstanding "good kid" who nevertheless pals around with his small town's group of resident juvenile delinquents. While out on a date with his girlfriend Jane (Aneta Corseaut), Steve sees a strange object drop out of the night sky and rushes to investigate. The object is a small meteorite containing the titular blob -- before Steve arrives, a local farmer finds the meteorite and gets attacked by the slimy, gelatinous entity.

Despite its predictable plot and some hamfisted B-movie acting, The Blob's built-in schlockiness saves it, as do its cool, visceral blob effects. The two go hand-in hand. For example, I laughed more than I got scared during the scene when Steve sees the doctor being attacked by the blob through the window. But that's okay: The Blob is a film that needn't be scary to be pleasurable. In some ways, the film does credit to fans of the monster movie genre by faithfully honoring its conventions and keeping the pace brisk. 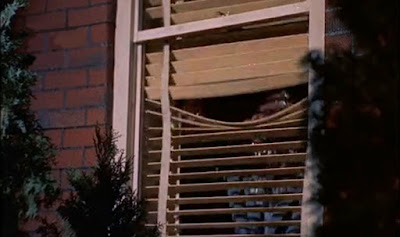 God help me, the first time I saw this well-made scene I laughed at poor Dr. Hallen's violent death.

McQueen is a treat to watch, as is Earl Rowe as Lieutenant Dave, the one cop on the local police force who takes Steve seriously and believes his claims about the monster before anyone else (besides Jane) does.

The Blob may not be a first-ranker as far as monster movies go -- it is no King Kong or Gojira or Them! nor does it have the frightening, paranoid power of Don Siegel's brilliant Invasion of the Body Snatchers (1956). But it is great fun for its unintentionally campy performances and its cleverly executed (if cheap-looking) effects. The Blob is scrappy, low-budget, schlock-horror cinema at its finest.

Sadly, Universal's The Wolf Man does not hold up quite so well, in part because it is tonally darker, taking itself more seriously than The Blob does. The Wolf Man is hard to laugh at yet isn't as scary or compelling as its studio cousins Dracula, Frankenstein (both 1931), or The Mummy (1932). In the end, despite my general love and admiration for the 1930s Universal horror film cycle, I enjoyed Universal's The Wolf Man quite a bit less than I do those other Universal films or The Blob. 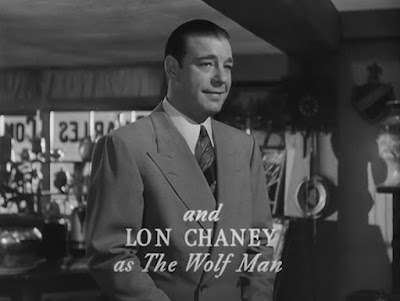 Lon Chaney Jr. is The Wolf Man's star and its weakest link. Unfortunately for him and Universal Studios, leaving the "Jr." off of his screen credit does not grant him the substantial talent and acting chops of his late father.

The Wolf Man's major problems boil down to its combination of

(1) Predictable, boilerplate plot elements you can see coming from miles away,

and, even more devastating,

(2) The lackluster lead performance of Lon Chaney, Jr. as Larry / The Wolf Man.

It is easiest to talk about these two elements together. 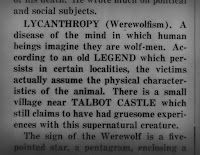 In the opening shot of The Wolf Man, an encyclopedia entry on lycanthropy mentions Talbot Castle as a site of ongoing werewolf occurrences, then seconds later Larry shows up at -- you guessed it -- Talbot Castle. Badly written expository dialogue between Larry and his father (Claude Rains) follows.

It's not that I expect innovative plotting in horror genre fare like this -- it's just that if the plot and dialogue are going to be so canned, then the film needs either really good actors (like, say, Rains, who plays Larry's father Sir John Talbot) or terribly bad or stiff ones so you can laugh at them.* Chaney Jr. is just good enough to be mediocre but not bad enough to be hilarious. He's not colossally bad, especially when playing the Wolf Man, i. e., Larry in werewolf form. But as Larry, he comes off as the kind of one-dimensional, good-ol' American gladhander we usually see Chaney's Wolf Man costar Ralph Bellamy play in films like His Girl Friday or Rock Hudson play knowingly and parodically in Pillow Talk. One has the feeling that Chaney Jr. is not in on the joke here. Rather, his limited acting chops make his Larry unintentionally buffoonish. 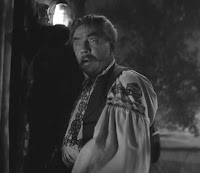 To take a contrasting example, Bela Lugosi surely lacks range as an actor -- his portentious mugging as The Wolf Man's gypsy fortune-teller Bela is essentially the same schtick he used to play Count Dracula in 1931 -- but at least he works quite well in the (small) role he is given. 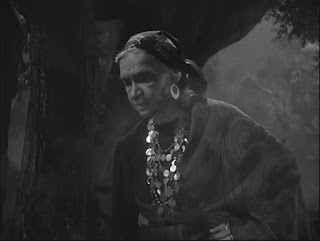 The same cannot be said of Chaney, Jr., who is simply not up to the task of carrying a genre film like this on his hulking shoulders. I should be able to feel more pathos for Larry as the terrible, supernatural disease of lycanthropy afflicts him -- instead, I root for the boring townspeople who want him dead. He comes off especially flat next to nuanced performers like Rains and Maria Ouspenskaya, who plays the gypsy woman Maleva and who steals every scene she's in.

Remember how I mentioned Universal's Frankenstein and The Mummy earlier? The main point of connection between those two films is star Boris Karloff, a world-class film actor who brings that special something -- screen presence, gravitas, charisma -- to every role he plays. Sure, one could argue that Frankenstein, at least, has a slightly better script than most of the Universal films that followed it, and that it benefits from the "freshness factor," being only the second film of the Universal horror cycle after Dracula. Furthermore, both Frankenstein and The Mummy also benefit from the abilities and inventiveness of their respective directors, James Whale and Karl Freund.

Yet the point I'm making here is that good stars make a big difference, especially in genre movies, where other elements are often (by design) formulaic. Even in the present day, there is a reason Tom Cruise action movies tend to perform well, and why big-budget blockbusters that eschew stars often face grim prospects. While I enjoy many of the Universal horror films of the 1930s and early '40s, the cycle's best entries are the ones with really charismatic and talented star actors: Karloff in Frankenstein and The Mummy, Karloff and Charles Laughton in The Old, Dark House (1932), and Claude Rains in The Invisible Man (1933).

So consider skipping The Wolf Man in favor of any of these other, better Universal horror films. Or watch it as an historical curiosity, as an example of what happens when a studio tries in vain to substitute one Chaney for another. 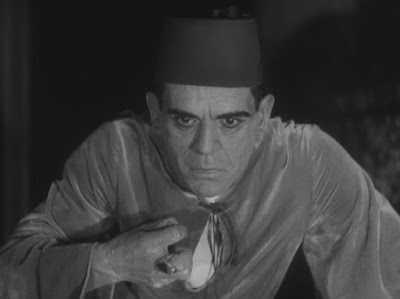 The great Boris Karloff as Imhotep in Karl Freund's The Mummy.

--
* Rains also plays the title role in Universal's excellent The Invisible Man (1933), the nurturing psychiatrist who brings Bette Davis out of her shell in Now, Voyager (1942), and of course the evil yet ultimately pathetic villain in Hitchcock's Notorious (1946).

Posted by Carter Soles at 12:53 PM No comments: