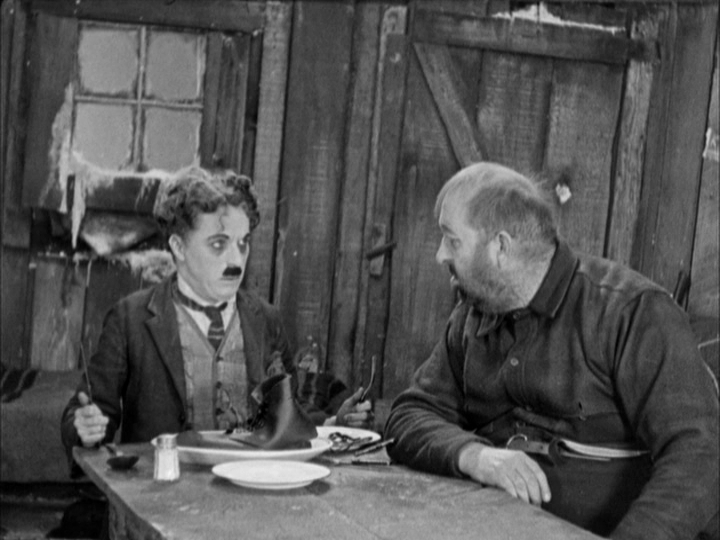 Charlie Chaplin and Mack Swain in The Gold Rush (1925).

Entry #8 on Entertainment Weekly's list of 100 All-Time Greatest films constitutes the first (and only!) appearance on the list of silent comedy legend Charlie Chaplin.

Now there is no denying that The Gold Rush is a comedy masterpiece, though so too are several of Chaplin's other features, including The Kid (1921), City Lights (1931), Modern Times (1936), and The Great Dictator (1940). My personal favorites of these are City Lights and Modern Times, and while I can understand the arguments in favor of The Gold Rush, both my personal taste and my film history knowledge convince me that Modern Times (which EW does not include in its rundown) deserves to be the highest-rated Chaplin film on any "best film" list.

In defense of its choice, EW writes that The Gold Rush contains "the most iconic performance by Hollywood's most indelible movie star," and that may be true, for Chaplin's gags in this film -- especially the dinner roll "shoe" dance -- are some of his most memorable and iconic. Yet a film is more than the performance of a single actor.* 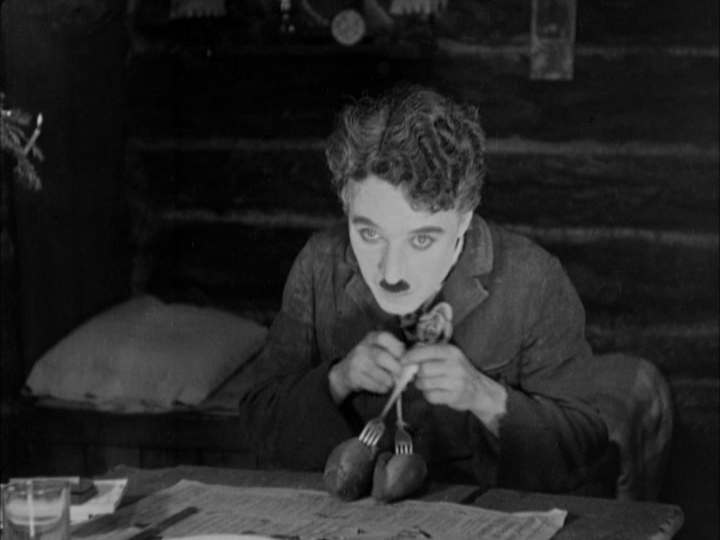 The dinner roll dance, one of the most famous sequences in The Gold Rush and in Chaplin's career.

That said, there is much to love in The Gold Rush, and it surely marks a key moment in Chaplin's trajectory as a director. It is only the third feature-length film to star Chaplin as his "Little Tramp" character, and the first Tramp-centric film to be released by United Artists, Chaplin's co-venture with Douglas Fairbanks, Mary Pickford, and D.W. Griffith. It is also a landmark film for silent comedy in general: film critic Luc Sante calls The Gold Rush "one of the first truly worldwide cultural phenomena" and notes that "it remains the highest-grossing silent comedy" bar none.**

Yet the film is not as coherent as the later Chaplin films I've already singled out as favorites, a fact that even Chaplin himself indirectly acknowledged by re-cutting certain scenes and omitting others in his 1942 re-issue of the film. I am a snobby purist who has never seen the 1942 version, so cannot comment on the relative merits of 1925 vs. 1942, but what I can say is that Chaplin's desire to tinker with the earlier version and to declare the later iteration his preferred, "definitive" cut speaks to the fact that the director was not totally satisfied with how the original hung together.

To be clear, I love the 1925 version and my pointing out that it is not as narratively tight as, say, City Lights or Modern Times is not meant to detract from how completely enjoyable, hilarious, and touching it is. I love watching The Gold Rush. I am simply saying that whatever its pleasures, and they are many, The Gold Rush does not mark the height of Chaplin's powers as a director, nor is it the most memorable, entertaining, or indelible screen appearance of the Tramp character.

The Tramp always represents the socially outcast and the poor, but whereas Modern Times is a sustained, scathing critique of U.S. capitalism, The Gold Rush leavens its critique by allowing the Tramp to strike it rich by the movie's conclusion. Sure, the Tramp (known here as "the Lone Prospector") never succumbs to greed, and is always motivated by "romance" according to Sante.*** Yet his ascent into the upper classes robs The Gold Rush of its reality principle, diminishing the bittersweetness that attends the endings of Modern Times and City Lights, in which the Tramp must uphold his trademark optimism and pluck in the face of unchanged, deeply impoverished material circumstances. I contend that The Tramp's comedy is funnier, and his pathos far more penetrating, when he remains an outcast and (somehow) a survivor. While The Gold Rush dares to show the Tramp being ostracized, marginalized, and mistreated during many touching sequences earlier in the film -- most notably during his failed New Year's Eve dinner party -- it cops out at the conclusion, sacrificing vulnerability and pathos for a more standard happy ending, which is satisfying in its own way but lacks the power and punch of the later Tramp outings. 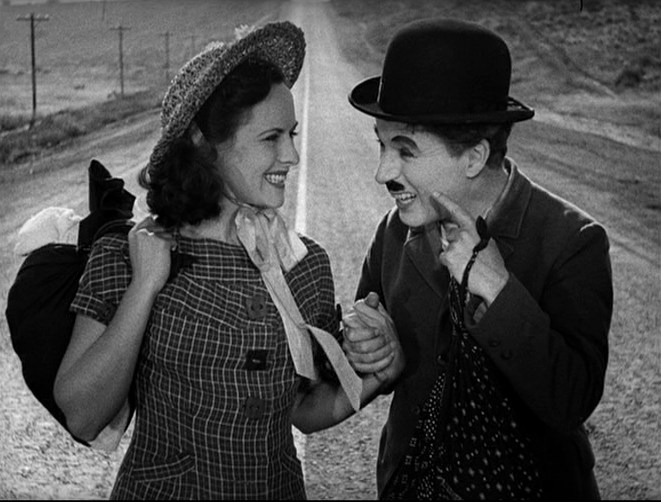 The tragicomic ending of Modern Times, in which the Tramp
puts a brave face on an all-but-hopeless situation.

So while I admire and enjoy The Gold Rush a great deal, and consider it a must-have for a "Top 100 films" list in general, I have to go with Modern Times as my pick for the top Chaplin film and probably the top silent comedy as well. Despite The Gold Rush's amazing special effects and its immense global popularity, I find Modern Times to be every bit as technically impressive, every bit as funny, and, in both an ideological and historical sense, more impactful than EW's chosen film.† Ideologically, Modern Times is the most direct critique of capitalism I have ever seen in a mainstream movie. And historically, Times is the Tramp's swan song and Chaplin's final "silent" picture, so is extraordinarily important to film history for both of those reasons.


Lastly, besides the possible fumble it represents in terms of accurately evaluating Chaplin's ouvre, the other problem that this entry exposes is the stupefying dearth of silent films on the EW Top 100 Films list as a whole. I say this not simply to be highbrow; I am genuinely baffled that a great many enjoyable, thrilling, and thoroughly entertaining silents have simply been omitted or ignored by EW, while drek like Return of the King is included on the list. This is ridiculous. Just in the comedy realm alone, I can think of several features -- the Chaplin titles mentioned above, Buster Keaton's Our Hospitality (1923) and The General (1926), and Harold Lloyd's Safety Last! (1923) -- that are much more entertaining AND historically significant than many titles that appear on EW's list. 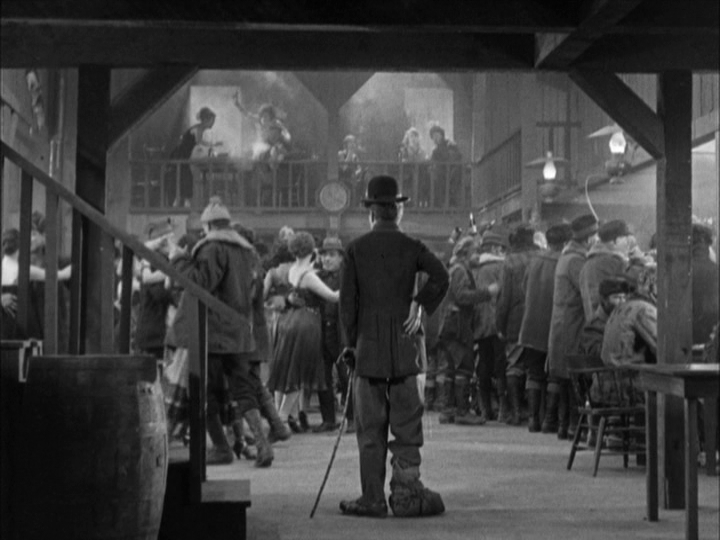 A lovely shot from The Gold Rush that poignantly depicts the Tramp's
perennial outsider status.

* This focus upon a single performance rather than the whole picture also distorts many peoples' views of The Dark Knight, a film which taps the post-9/11 cultural zeitgest like practically no other (if we ignore Zero Dark Thirty) and is elevated by Heath Ledger's bravura performance but is simultaneously plagued by many other glaring structural and aesthetic problems.
** The Gold Rush Criterion Edition booklet (Criterion Collection, 2012), p. 7.
*** Criterion Edition booklet, p. 13.
† Anyone who wants to be blown away by the ingenuity of Chaplin and his cinematographer Roland Totheroh simply must get hold of the Criterion Edition of The Gold Rush and watch the "A Time of Innovation" documentary on the second disc of the two-DVD set.
Posted by Carter Soles at 4:40 PM