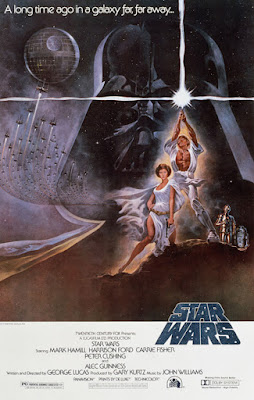 This post functions as a prequel (hee hee) to my forthcoming review of Star Wars Episode II: Attack of the Clones. The present post will deal with the following two facts:

(2) The Star Wars prequels are objectively shitty on every level except their deployment of digital effects and sound design, plus a few individually well-executed scenes here and there.

Similarly, The Empire Strikes Back and Return of the Jedi were also family events, and big cultural events as well -- I got pulled out of school by my folks to go see Return of the Jedi with friends. Star Wars was the most significant cultural phenomenon of my early lifetime, and like it or not, my destiny is still somewhat chained to it.

Nowadays I categorically prefer Steven Spielberg's films over his geeky buddy George's,  As I have increased my appreciation for the art and technique of cinema, I see that Spielberg is an all-around great director, a true master of the form. Lucas is a good ideas man and executive producer, and a marvel at deploying special effects of all kinds, but he is lousy with scripts and actors -- this is a real Achilles' heel for him.

That said, that original Star Wars trilogy will always be with me.

What this also means is that I was one of those folks likely to have trouble with the Star Wars prequels.

I have already explained one reason why the prequels are total failures, which is because Lucas tried to take on too many tasks that he's frankly never shown he's very good at:


If Lucas would have brought on additional writers, surrogate directors, etc. and just focused on the one thing he knows how to do well, i.e., deploying special effects, those [prequels] might have been at least watchable and maybe even enjoyable. As it is, they are some of the worst movies ever made -- incoherently scripted, boringly shot, and abysmally directed -- and it is confounding to think that they could have been, with just the slightest bit more thought and effort, something more.

Ultimately, these films are mostly worthless because, as Mr. Plinkett has pointed out, they are structured like character-driven narrative films, yet they feature flatly written "characters" and insufficiently thought-out stories. At the scene level, they are too often directed badly, unimaginatively, and flatly. They are boring.

All that said, this apologia for the prequels is well-articulated and mostly fairly convincing. I will return to this piece in my forthcoming Episode II review.

As for recent, Disney-era Star Wars developments, you can read my Force Awakens review here. I haven't been able to motivate myself to get out and see Rogue One yet, but I have taken great pleasure from watching this long review, this short review, this follow-up review, and this amazing review parody instead. 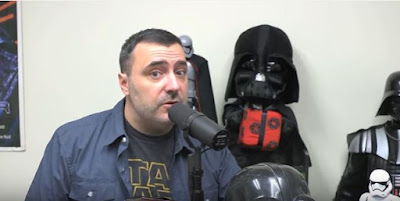