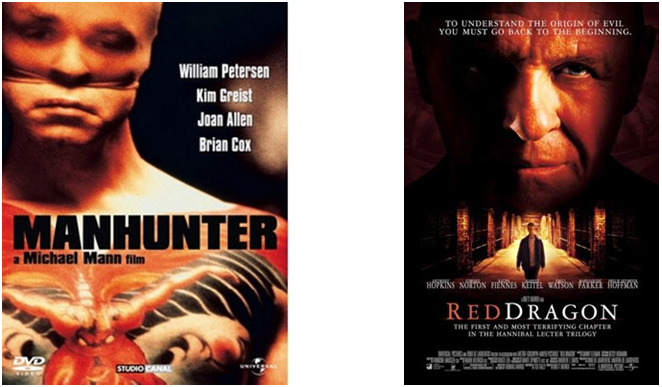 I have been slowly working on this post over the course of the past year, and in some ways have been beaten to the punch by Cracked.com writer Adam Tod Brown, who makes a similar case in item #1 on his recent list of "Four Classic Horror Movies That Get More Love Than They Deserve." He notes that "Red Dragon is just Manhunter with less neon and more bullshit Hollywood-recommended plot lines and casting decisions."

I agree. I would in fact say that Manhunter (1986, dir. Michael Mann) is so utterly superior to the half-assed Red Dragon (2002, dir. Brett Ratner) that it is not even worth anyone's time to watch the latter, despite its remarkably good cast.

On what grounds do I make this claim?

(1) Red Dragon features slow, fucked-up pacing due to clunky editing vis-a-vis its predecessor. While this flaw permeates all of Red Dragon, and is foreshadowed by how long the film takes just to get into its actual plot (it's seventeen minutes until we finally reach the frikkin' Leeds house!), I can illustrate this via one emblematic scene comparison:

In Manhunter, Will Graham attends a briefing at the Atlanta Police Department after his initial inspection of the Leeds house crime scene. The scene in headquarters lasts three and a half minutes and consists of about thirty-seven shots, three of which are satisfyingly long takes that help make other sections of faster cutting feel more intense. The long takes include the forensic expert's discussion of the killer's bite, the Atlanta chief detective's address to the assembled agents, and the great opening steadicam shot of the detective, Crawford, and Graham walking down a series of hallways to the briefing.

. . .with shorter takes like this one from the more conventional shot/reverse shot pattern
that ends the sequence. Note how the pensive Graham stands out visually here
even though others are doing most of the talking.

By contrast, the same sequence in Red Dragon takes only three minutes but includes forty-two shots, and is spread over two scenes in two locales, first a large lecture hall, then a smaller office. Despite the additional locale, the camera work is less inventive -- no steadicam work or noticeably long takes here -- and the editing is plodding, mostly shot/reverse shot patterns all the way through both scenes.*

. . . meanwhile, the boringly edited scene's longest take is this predictable
close-up of Graham as he delivers his speech.

Though Red Dragon provides some minor variation in editing tempo (i.e., one or two slightly longer takes) when Graham gives his speech in the lecture hall, the scene itself is more boring because it is a monologue rather than a conversation between four guys as in Manhunter. By having Graham be verbally reticent despite his visual centrality, Mann's film makes him more pensive, mysterious, and haunted. Ratner's approach changes Graham into a talkative know-it-all and photographs him in a way that makes him more visually central (in an obvious way) yet less intriguing and moody.

These may seem like small things but they add up to palpable differences in cumulative effect over the course of each movie.

(2) Ralph Fiennes is WAAAAY too good-looking to play Frances Dolarhyde, whose character arc depends upon him being repulsively ugly and socially outcast due to his unusual appearance. Fiennes' casting = epic fail, despite the actor's great talent and that cool tattoo. Manhunter's Tom Noonan is vastly more believable and (therefore) scary in the Dolarhyde role. See for yourself, in these two stills taken from each film's "unveiling to Lounds" scene:

Ralph Fiennes in Red Dragon: The tattoo is cool and Fiennes is a truly great actor,
but physically ugly social outcast this guy is not.

(3) Anthony Hopkins' Lecter is a caricature by this point in the game. His added scenes, like the lengthy and unnecessary prelude sequence, are pointless filler that distract from the main event: Graham. Red Dragon's needless over-deployment of Lecter drags the movie down and is a key example of when real-world fandom fucks up a fictional universe.**

Brown notes this problem when he states that


Hannibal Lecter is everywhere in Red Dragon. Pouring wine, walking laps, giving advice, nearly killing detectives in flashbacks, and just generally eating up the scenery like only the Sir [Anthony Hopkins] can. The problem is, he's not supposed to. While there is a Hannibal Lecter character who serves the same role in the plot and is perfectly creepy in his own right, he's not a major focus of the original version of the film. It's more about the interaction between the lead detective and the serial killer.

I love Anthony Hopkins a lot, but I simply cannot buy the over-saturation of Lecter in Red Dragon. The lap-walking scene and the totally unnecessary pre-credits sequence are the most gratuitous examples of this tendency. They slow the movie down and serve no valid purpose.

In contrast, Manhunter gets the Lecter-balance right, leaving him as a sinister presence in the background but not letting him chew scenery and get in the way of the real story being told.


Ratner is the sort of guy you hire for your franchise when you have no idea what to do, as evidenced by his last two sequels: both Red Dragon and X-Men: The Last Stand operated at the level of a Saturday morning cartoon, the latter a particularly bad one. It’s telling that once Ratner made those films, each series felt the need to follow them up with prequels, producers eager to make audiences forget what just happened. Ratner’s exactly the type to have no idea how to deliver a no-brainer of a concept.

Conversely, Michael Mann has proven himself again and again to be a master of the urban crime thriller: Thief (1981), Heat (1995), The Insider (1999), Collateral (2004), and Manhunter are all superb entries in this genre, and Heat is an outright masterpiece by any measure. So on the basis of Mann's immense capabilities as a director of action thrillers, and of the better filmmaking choices made in practically every regard, I urge you to see Manhunter and to forget that the lackluster Red Dragon exists.

Ralph Fiennes says: "I'm a great actor, but together with Sir Anthony Hopkins,
I helped ruin this movie!"


UPDATE 7/28/2014: io9's review of Ratner's latest, Hercules, supports my view that the hack director's style beats the life out of everything he makes: "I believe that Brett Ratner is an Entertainment Vampire. By this I mean he finds entertaining concepts and sucks the entertainment right out of them."

--
* This tendency to cram way more shots into less time and to deny a scene a chance to breathe or vary much in tempo is not limited to Ratner but is part of a broad Hollywood trend David Bordwell has termed Intensified Continuity.
** See also: the over-emphasis of Darth Vader in the Star Wars prequels, as pointed out in Part 3 of this lovely video review of Star Wars Episode III. The relevant section begins at the 1:04:57 mark of the linked video.
*** Devoted readers will recall that Mann is one of the directors I singled out as a personal favorite at the end of this post.
Posted by Carter Soles at 11:04 AM