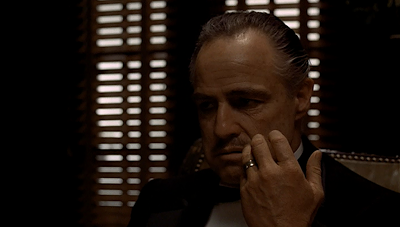 The Godfather is a true American classic, a beautifully shot, lit, acted, directed, and edited film. It stands as one of the best films of the "Hollywood Renaissance" (or "New Hollywood") period, which lasts from roughly 1967 to 1980. The Godfather was an enormous hit in its time, not anticipated to be (nor marketed as) what we would now call a "blockbuster," but seen retrospectively (alongside William Friedkin's The Exorcist) as a proto-blockbuster by film scholars like Thomas Schatz, who says the film helped inaugurate the "blockbuster syndrome" that dominates Hollywood to the present moment, and by film journalists like Peter Biskind, whose dishy but thoroughgoing book Easy Riders, Raging Bulls is a must-read for anyone interested in this unique period in Hollywood history.*

In addition to benefiting from Coppola's notoriously passionate (some might say hardheaded) direction, The Godfather was shot by cinematographer Gordon Willis, who earned the nickname "Prince of Darkness" by artfully using high-contrast lighting techniques borrowed from German Expressionism and film noir, probably helping to inspire the current vogue for "dark" and "gritty" cinematography in today's Nolan-esque blockbusters. Due to the contributions of its production crew and stellar cast, The Godfather brings together all the best tendencies of noir, gangster films, and 1970s method acting into one immensely appealing, melodramatically epic package.

While its narrative structure basically follows the "rise and fall of a crime lord" pattern germane to classic gangster films like Little Caesar, The Public Enemy (both 1931), and Scarface (1932), The Godfather is really a male melodrama, interested in showing us the emotional turmoil and personal sacrifice endured by Vito Corleone as he struggles to preserve his family (in both senses of the word). His suffering throughout the film renders him heroic to us, allowing us to see him as a morally just man even though he is no doubt responsible for many illegal and violent acts (which, since they lie safely in his past, we never see).** 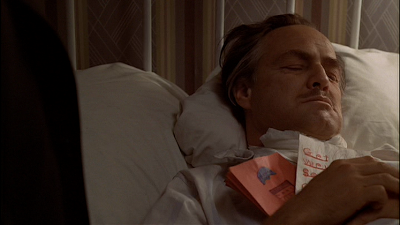 The Godfather as male melodrama: Vito, who spends most of his screen time
convalescing in bed, verges on tears when he learns of Michael's fate.

EW's placement of The Godfather at #2 marks the beginning of a streak I notice across the whole EW "Greatest Film" list: a pronounced favoritism shown toward Hollywood films of the 1970s. Now I am the last person in the world to disagree that these are by and large truly great films; with the possible exception of the 1930s and '40s (the "Golden Age"), the 1970s was surely Hollywood's greatest decade ever. However, I think the prevalence of 1970s "Hollywood Renaissance" films on the list reveals the EW staff's tendency to overvalue the domestically produced films of their own generation; I presume that most of the list's creators are Baby Boomers who grew up with this stuff or else Gen-Xers like myself who came to appreciate these films when we got a little older.

In any case, EW's list gives short shrift to some more recent films and filmmakers of note: I'm happy they got Richard Linklater and P.T. Anderson on there, but no Coen brothers? Not even Fargo? And nothing by Errol Morris, the greatest living documentarian? The list also egregiously overlooks many older works: Sunrise, Griffith, and Chaplin aside, where are the silents? No Nosferatu? No The Passion of Joan of Arc? Really? Despite the towering influence and talent of Coppola and his cohort, these seem like glaring omissions.

That said, The Godfather is a near-perfect movie and I have no serious objection to its placement so high on the list. It would be lower down on my personal list but would definitely still be on there, probably in the top twenty or thirty or so. 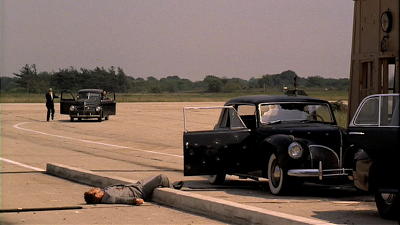 Bonus afterthought: If you have already seen the obvious Coppola greatest hits -- The Godfather, The Godfather Part II, and Apocalypse Now -- you owe it to yourself to see his overlooked masterpiece, The Conversation (1974). Made during a brief pause between the first two Godfather films, The Conversation is one of the best Nixon-era paranoid thrillers ever made -- only Alan J. Pakula's The Parallax View and All The President's Men are in the same league. It also contains one of Gene Hackman's best-ever performances, utterly different from, but rivaling, his insane turn as Popeye Doyle in The French Connection. The Conversation also carries the distinction of being one of only five films to feature the brilliant 1970s character actor John Cazale.***

--
* Schatz, "The New Hollywood" in Movie Blockbusters, Ed. Julian Stringer (Routledge, 2003) p. 23; Biskind, Easy Riders, Raging Bulls (Simon & Schuster, 1999) pp. 162-4, 224. There is also a film version of Easy Riders, Raging Bulls (2003, dir. Kenneth Bowser) which is lots of fun but not nearly as good as Biskind's book.
** For more about melodrama in American film and culture, see Linda Williams, "Melodrama Revised," in Refiguring American Film Genres, Ed. Nick Browne (U. Cal. Press, 1998) pp. 42-88.
*** The other Cazale films (besides The Godfather and The Conversation) are: The Godfather Part II, Dog Day Afternoon, and The Deer Hunter. For those interested in 1970s films and/or Cazale, I highly recommend the documentary I Knew It Was You: Rediscovering John Cazale (2009, dir. Richard Shepard).
Posted by Carter Soles at 8:08 AM