Safety Last at the Dryden 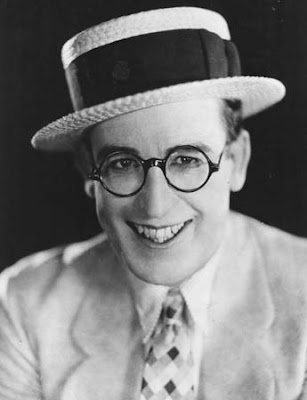 I live in the Rochester area and therefore am lucky enough to live fairly near to the Dryden Theater, a superb art-house cinema attached to the historical George Eastman House. The Dryden is my favorite theater in the region; it shows a wide array of stuff, from foreign cinema to silent cinema to arthouse cinema to Golden Age Hollywood classics to even more newly minted Hollywood "classics" from as recently as the 1990s or so. Just take a look at the Dryden's linked schedule and you'll see what I mean. If I had endless resources and time, I would likely head over there three or four times a week.

Last night I went with a friend to the Dryden to see Safety Last (1923), the most famous film to star slapstick comedian Harold Lloyd. Lloyd is the least known of the "big three" silent era comedians, the other two being Charlie Chaplin and Buster Keaton. Interestingly, despite his somewhat diminished reputation today, Lloyd was the most economically successful of the big three during their heyday the 1920s.

Despite having a great appreciation for the work of Charlie Chaplin and Buster Keaton, and even though a couple of Chaplin's films (City Lights and Modern Times especially) are among my very favorite silent comedies, Harold Lloyd stands as my personal favorite silent-era comedian. My Lloyd fandom stems in part from early exposure: when I was young, episodes of "The Harold Lloyd Show" aired on a local station on weekday afternoons. (This was NOT an original show, but a syndicated compilation show that simply aired Lloyd silent shorts.) Upon arriving home from school, my brother and I quite regularly watched that show; we found Lloyd's death-defying antics highly entertaining. 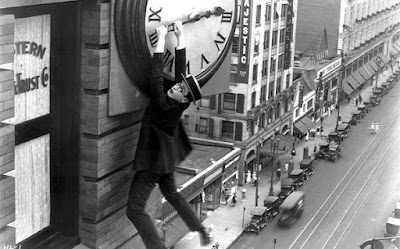 Harold Lloyd in Safety Last (1923): this shot of Lloyd dangling from the clock
is one of the most famous images in Hollywood history.

However, last night I was reminded of another reason I find Harold Lloyd so appealing and funny: to my taste, he has the funniest face and physique of the big three silent comedy masters. You see, both Chaplin and Keaton are diminutive men who play their small size for comedy, often pairing themselves with big and/or fat guys to make their shrimpiness stand out. 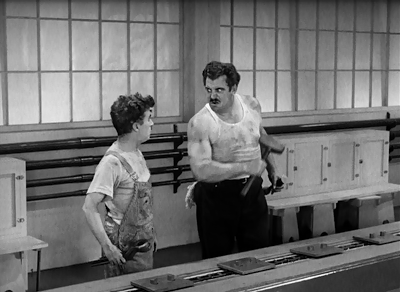 Lloyd, by contrast, was a big fella, standing 5' 10" compared to Chaplin's and Keaton's modest 5' 5". His work is worthy of present-day appreciation in part because it is simply breathtaking to watch a guy of his physical size -- with a disadvantageously higher center of gravity relative to his smaller contemporaries --  execute the harrowing stunts he always attempts in his films. His penchant for fairly dangerous gags, a signature of his style, makes his work stand out from other silent comedies, especially Chaplin's. (One could argue that Keaton displayed a similar penchant for extreme physical risk-taking, especially whenever he got near trains.)

Lloyd's comedy depends upon his donning those funny round glasses and playing a slightly nerdy and buffoonish sort who just wants to fit in and succeed in life. His characters usually exhibit a positive, go-getter type attitude, which stands in stark contrast to Chaplin's more poignantly marginalized, romantically oriented Tramp and Keaton's hapless yet highly ironic "Great Stone Face" character, who never reacts (facially) to the mayhem ensuing around him. Unlike the politically deconstructive Chaplin and the wryly modernistic Keaton, whose personas resonate more easily with contemporary audiences, Lloyd's Horatio Alger-ish screen persona is a major factor contributing to his being generally less known to today's viewers, accustomed as we are to hip cynicism and postmodern anti-heroism.

As a dedicated fan, however, I had a genuinely lovely time last night, laughing at Lloyd's wacky facial expressions (check out that goofy smile he's flashing at the top of the post!) and delighting in his harrowing yet humorous ascent up the exterior of a tall department store building -- the stunt that constitutes Safety Last's famous, climactic set piece. Prior to the screening, as usually happens at the Dryden, a staff member addressed the audience, delivering a succinct rundown of the film's production history and its significance to Lloyd's career. At the end of her talk, the presenter reminded us that even though some of the shots in the film were visually enhanced via clever camera placement, making Lloyd appear to be much higher off the ground than he was in actuality, one important thing to appreciate about silent-era comedies is that, unlike most films made today, it is always the real actor up there on screen endangering his life just to entertain us. In discussion with my friend afterward, we agreed that it was refreshing, even exhilarating to see a film like Safety Last that doesn't need digital effects or incessant rapid-fire editing to create tension, thrills, and laughs. Those techniques have their place, but this silent-era gem was pure cinema: visually elegant, physically dynamic, and -- most importantly -- huge fun.*

Kudos to the Dryden Theater for preserving and screening such wonderful delights from cinema's rich historical past.

--
* The term "pure cinema" was first coined by French abstract filmmaker Henri Chomette in the 1920s, but was later adopted and popularized by Hitchcock, who used the term to describe a purely visual form of cinematic storytelling. That is, in pure cinema one should be able to turn off the sound and still follow the meaning of the action and images onscreen. Hitchcock frequently achieved this goal in his work, which is part of the reason he is so revered -- and why his films hold up so well -- today. Silent films -- the medium in which Hitch got his start -- are almost (except for their reliance upon intertitles) pure cinema by default, since they rely on visuals without the use of any synchronized sound.
Posted by Carter Soles at 8:42 AM