Who I Am And Why I'm Doing This

I have always loved movies. One of my earliest and fondest movie memories happened on my 12th birthday in 1983, when my dad brought home a VCR from his workplace and I rented two videos to watch with my friends: Thunderball (1965) and First Blood (1982). The former is the first James Bond film I ever saw, and the latter was one of the first few rated "R" movies I ever saw (though I previously saw both The Awakening and The Blue Lagoon with my friend George -- he had older sisters so his parents were more permissive about watching adult-themed movies at their house). Me as a kid, watching something on TV. Dig the late-1970s carpet!

These two movies defined my moviegoing tastes for most of the 1980's. My friends and I inhaled action movies starring Sylvester Stallone, Arnold Schwartzenegger, and (later) Bruce Willis, and I became a huge James Bond fan, particularly loyal to the early (but rentable) Sean Connery Bonds. Of course, the John Hughes teen films, particularly The Breakfast Club  and Pretty in Pink, also shaped my tastes in those days, and once Say Anything . . . came out in 1989, I saw my life in Lloyd Dobleresque terms for far longer than I would like to admit.

The point is, I am a child of the 1980s and, in addition to the aforementioned films, the Star Wars trilogy, the Indiana Jones films, and really the whole Steven Spielberg corpus form the basis for what I expect out of movies. That is to say, to this day I prefer "classical" film aesthetics -- well-composed shots, adherence to the 180-degree rule, not too much handheld camera, etc. -- over the "Chaos Cinema" aesthetic that seems to be en vogue at present. (There are exceptions to this, e.g., Kathryn Bigelow's Zero Dark Thirty, but let's defer that discussion until later.)

Once I entered college in 1989 and started watching Hollywood films of the 1970s -- stuff like Chinatown, Midnight Cowboy, Dog Day Afternoon, and Five Easy Pieces -- I truly blossomed as a cinephile. I grew to love movies on a much deeper level and I voraciously sought out new films and new types of films -- offbeat genres, non-U.S. national cinemas, and directors I'd heard about but never seen before -- in order to expand my film appreciation palette.

Now, twenty four years later, I am a professor of film studies at a four-year college in upstate New York; I have my dream job, watching, critiquing, interpreting, and teaching about movies.

The purpose of this blog is to share my love of and insights about movies in a less formal setting than the classroom. While I may (quite likely) use some sophisticated film terminology here to get at specifics of what I like or to support my ideas and interpretations, I am not holding myself to the same rigorous standards that I do in the academic setting. I just want to share my untrammeled enthusiasm for the art of film, and to hopefully fuel yours. I hope some of the films and ideas I post about here will inspire you to deepen your own appreciation for this potent, exciting, and culturally ubiquitous art form.

I will also use plenty of four-letter words and polemical, hyperbolic statements, because ultimately this blog is more about passion than analysis. You've been warned. 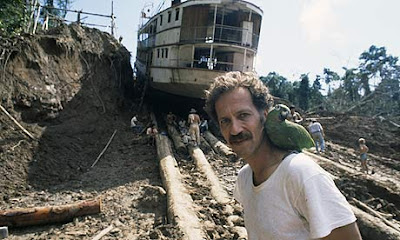 “It is not only my dreams, my belief is that all these dreams are yours as well. The only distinction between me and you is that I can articulate them. And that is what poetry or painting or literature or filmmaking is all about... and it is my duty because this might be the inner chronicle of what we are. We have to articulate ourselves, otherwise we would be cows in the field.” --Werner Herzog
Posted by Carter Soles at 1:17 PM

Email ThisBlogThis!Share to TwitterShare to FacebookShare to Pinterest
Labels: who I am