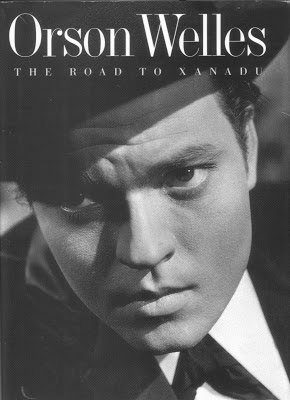 Welles as depicted on the cover of Simon Callow's superb biography,
Orson Welles: The Road to Xanadu*

I am still in the process of learning about Orson Welles; I am surely no expert on the man or his work. But of course I have seen Citizen Kane many times, and have absolutely no objection to its being granted the #1 slot on Entertainment Weekly's "Greatest All-Time Films" list. Like the EW critics, I make this assertion NOT out of adherence to canonical tradition that says we must denote Kane as the Greatest Film Ever, but because it truly is one of the greatest films ever, and its existence is especially surprising given the historical circumstances under which it was made. A strange, perfect storm of factors led to its production: most notably, George Schaefer, RKO's soon-to-be-outgoing studio chief, granting the very young first-time director Orson Welles carte blanche to make whatever the hell movie he felt like making once the screenplay was approved.** Pretty much never, before or since, has a director had that much control over a project produced within the Hollywood studio system.

And much as Welles is an interesting figure in and of himself, I am not here to further glorify Welles. He was surely the driving force behind Kane and his considerable chutzpah played a crucial role in getting the film produced, but there would be no Kane without the vast resources of the studio system itself, particularly RKO's special effects technicians, whom Welles pushed to their circa-1940 limits during post-production on this film. As Simon Callow writes, "RKO had one of the most advanced special effects departments in the industry," run by back-projection expert Vernon Walker and including optical printing genius Linwood Dunn. According to Callow, Walker and Dunn's contributions to Kane are "immeasurable," though in at least one sense they can be quantified: roughly half of all the shots in Citizen Kane feature optical printing work by Dunn.***


[In] the sequence at the Thatcher Memorial Library [the] camera pans down a monumental statue of Thatcher onto the female guard. Both the statue and the pan are entirely the work of Dunn. As [cinematographer Gregg] Toland shot it, the scene started on the guard. Dunn made a miniature model of Thatcher and perfectly matched the base of the statue with what had been shot. 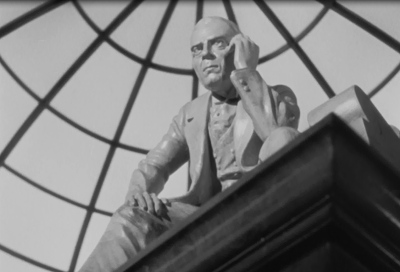 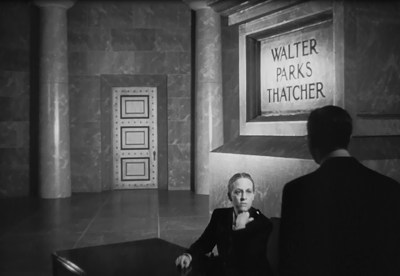 . . . blends seamlessly with this on-set footage shot by Gregg Toland.

Equally deserving of mention, among many others, is cinematographer Gregg Toland; the vainglorious Welles considered Toland crucial enough to the process and product of Kane to share screen credit with him. Also influential upon the look of Kane was director John Ford, whose 1939 masterpiece Stagecoach (conspicuously absent from EW's "Greatest Films" list) taught Welles (via approximately 45 repeat viewings) almost everything the fledgling director needed to know about how to compose and edit shots at this inceptual moment in his movie career. 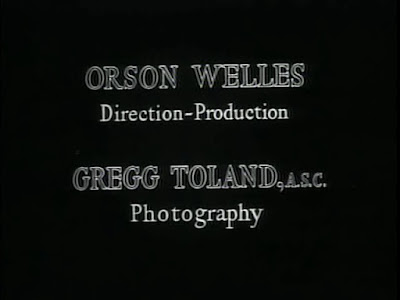 One critique I often hear from viewers of Citizen Kane is that it is too cerebral, that the viewer does not feel enough sympathy with protagonist Charles Foster Kane (played by Welles himself) to get truly immersed in the story of his life. I think this is a valid criticism; in many ways, Welles reminds me of Christopher Nolan, another cerebral director who often struggles to achieve emotionally resonant characterizations in his films.

Related to this, Callow says of Welles' acting style that his "great skills as an actor lay in the realm of the rhetorical, in which the actor is absolutely in command of himself and his material; when he touches the personal, which he does rarely, he seems to lose his judgement." Callow calls Welles a "King actor," well-suited to playing grandiose protagonists in an externally focused style, but not particularly suited to smaller supporting roles and internally focused gestures; Callow claims of Welles that that the "common touch was always to elude him."†

Yet my response to the "not enough beating heart in Kane" argument is that, in this case, it is the point of the film that we do not fully empathize nor identify with (the character) Kane; he is, in the end, a tragic figure and a bit of a monster. Where my heart connects with the movie is mainly through the cumulative effect of the events of Kane's life; by the time he is pushing his second wife to be a professional opera singer, or by the time she leaves him in the final reel, I am emotionally hooked. In the earlier sections of the film, it is the supporting cast, especially the affable Joseph Cotten as Jedediah Leland, who humanizes the unfolding tragedy of his closest colleague's narrative arc.

So ultimately, I agree with Owen Gleiberman and company when they say:


Welles didn’t just craft a great movie; he bottled what moviemaking would forever be — and therefore was, from the exhilarating moment that Kane existed. That’s not just an achievement, it’s a miracle, and it’s one we honor by recognizing that no great movie feels quite as alive when you’re watching it as Citizen Kane does. 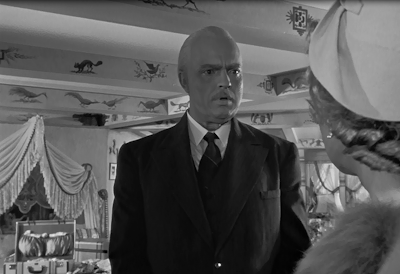 In the capping tragedy of his life, Kane begs Susan to stay -- to no avail.

Bonus afterthoughts: While Touch of Evil, probably Welles' second-best film, will be discussed separately -- it is entry #75 on EW's list -- I want to take the time now to single out a few other Welles films of particular interest. Welles had a tumultuous film career, and a great many of his movies were either edited by studios without his compliance, or were never finished.††  Nevertheless, many of them, even the "butchered" ones, are quite good: gracing the top of my list is his 1947 film noir, The Lady from Shanghai, which is probably my personal favorite Welles film. I also strongly recommend It's All True (1993), The Stranger (1946), and his "visual essay" F for Fake (1973) -- which includes, on DVD 2 of the Criterion Collection edition, Orson Welles: One-Man Band (1988), a fascinating documentary about the director's unfinished projects. Welles also directed several Shakespeare adaptations, all of which are rumored to be at least interesting if not consistently great. I have seen his Macbeth (1948) and loved it; I have heard that 1965's Chimes at Midnight (which I have not yet seen) is probably the best of the lot.

Lastly, I also recommend Richard Linklater's Me and Orson Welles (2008), a warm-hearted little picture in which Christian McKay absolutely nails his portrayal of young Welles with uncanny accuracy. (Jonathan Rosenbaum reviews the film here.) Less accurate but pretty fun if you like dramatic reenactments of Hollywood behind-the-scenes shenanigans is RKO 281 (1999, dir. Benjamin Ross). 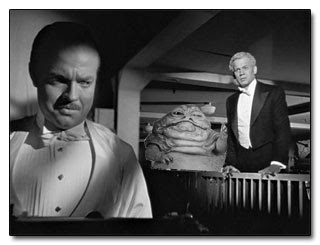 A rare still from a controversial scene cut from Citizen Kane.

--
* Callow is a truly gifted and entertaining writer whose Road to Xanadu constitutes only one-third of a proposed three-volume biography of Welles. Volume two, Hello Americans, was released in 2006; volume three is still forthcoming.
** Welles scholar James Naremore notes that "it would be a mistake to assume that Welles ever had total freedom" at RKO, since his stay at the studio "was littered with rejected or abandoned scripts" and even on Kane he had to adhere to the budget limitations imposed by Schaefer. (The Magic World of Orson Welles [SMU Press, 1989] p. 18)
*** Callow, The Road to Xanadu (Viking, 1995) pp. 521-3.
† Callow, Hello Americans (Penguin, 2006) pp. 21, 23-4, 248.
†† For a complete rundown of which films were completed to Welles' satisfaction and which ones were not, Jonathan Rosenbaum's post on Mr. Arkadin makes a good starting point.
Posted by Carter Soles at 8:28 AM