I'll start by discussing the films that made the deepest impression on me this year. These are not in any particular order after the first one, and should NOT be taken as some kind of ranked or preferential list of any kind. Remember, film reviews are subjective! 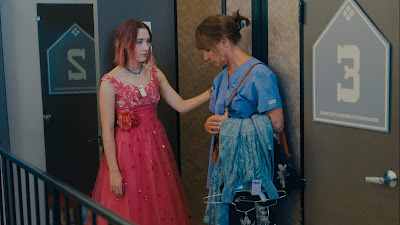 My favorite movie of the year is Lady Bird. I can hardly believe that this wonderful, confident, superbly written and directed coming of age story marks Greta Gerwig's feature film directing debut. It never hits a false note. It is funny, self-assured, and poignant. It is a must-see.

If Lady Bird possesses any flaw, it is not intrinsic to the film itself (I hope). Instead it lies with claims that it may have plagiarized. Michelle Cruz Gonzales has written a blog post mentioning the eerie similarities between Lady Bird and Real Women Have Curves (2002), another must-see mother-daughter themed movie. Gonzales calls Lady Bird "the white-lady Real Women Have Curves" and outlines the case for plagiarism on Greta Gerwig's part. While I am not sure (and Gonzalez admits in a follow-up article that she cannot prove) Gerwig plagiarized the earlier film, I also noticed striking similarities while watching the newer one: the hard-working, "tough love"-oriented mother figure, the daughter who goes to New York City at the end. So I consider this a valid issue yet I still love Lady Bird very much.

The other most memorable and affecting films I saw this year include . . .

. . . another feature film-directing debut, Jordan Peele's great thriller Get Out -- see my review here. Also, read Mark Harris' smart commentary about the film and its place in contemporary Hollywood.

Blade Runner 2049 is probably the most visually stunning film of 2017, a lavish sci-fi spectacle I enjoyed very much. Despite some lingering questions about its gender politics (which could be an interesting provocation or just more of the same Hollywood sexism), the Blade Runner sequel is easily my favorite big-budget film of the year. Read my complete review here.

The Shape of Water is another visual stunner -- though I would expect no less from director Guillermo Del Toro, one of the great masters of lavish mise-en-scene. Water is an offbeat, 1950s-set love story between a mute janitorial employee (Sally Hawkins) at a U.S. government facility and a Black Lagoon-esque amphibious creature who is being held there. The film drags a bit in its second act -- it could use a bit more Octavia Spencer and a bit less government (and Soviet) plotting -- but overall, this is a remarkable film, lovingly crafted, chock full of superb performances (Richard Jenkins is a standout) with about the best ending of any film I've seen this year. 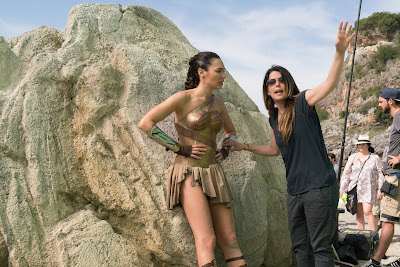 My favorite action film of the year is Wonder Woman - read my complete review here.

I saw Star Wars: The Last Jedi about a week ago, I plan to see it again, and while I really enjoyed it my first time out, I am unsure how it will hold up over time. But whether I like it or not, this one is going to loom large in the pop-cultural conversation for awhile, especially since Disney has recently furthered its plans to take over the entertainment universe. My review is here.

Recent movies I would like to see but haven't include The Disaster Artist; Colossal; The Big Sick; Three Billboards Outside Ebbing, Missouri; Thor 3; Beatriz at Dinner; and The Post.

And my favorite TV shows of the year include:

The Crown (Netflix) - The other best dramatic show of the year. 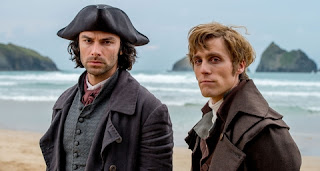 Outlander (Starz) - I've been watching this for three seasons and found it uneven early on but despite one sluggish and unnecessary episode (Ep. 5 "Freedom & Whisky"), season three is a knockout!

The Good Place (NBC) - The funniest, cleverest, and most poignant comedy around. I can't say much without giving stuff away, but Kristen Bell and Ted Danson lead a stellar cast in this whip-smart metaphysical comedy. A must-see, but don't read too much about it ahead of time as there are big twists ahead! 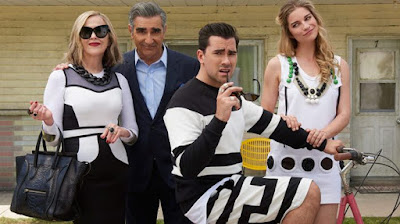 Schitt's Creek (CBC) - The other funniest, cleverest, and most poignant comedy around. Eugene Levy and Catherine O'Hara drew me in, but younger stars Daniel Levy and Annie Murphy keep me coming back. A warm-hearted, very funny series about a formerly rich family down on its luck.

GLOW (Netflix) - Easy to take for granted because of how effortlessly this series combines comedy and pathos. This first season is mostly buildup to greater things yet to come, but is worth watching for Alison Brie's and Marc Maron's performances alone.

That's all for now. Happy New Year!
Posted by Carter Soles at 8:06 AM

Email ThisBlogThis!Share to TwitterShare to FacebookShare to Pinterest
Labels: roundup