I watched the new Netflix series The Haunting of Hill House and despite admiring many of the visuals and respecting what the show's creators are trying to do, I have come away feeling underwhelmed. I basically had to force myself to watch the last three episodes because I felt done with the whole thing by the time I finished episode seven (of ten).

I have not read the source novel by Shirley Jackson but have seen (and very much like) the 1963 Robert Wise film adaptation The Haunting with Julie Harris. This new version actually bears very little resemblance to Jackson's book or that 1963 film, instead grafting a family melodrama onto the basic premise of a haunted house. As Holly Green's informative article notes, the haunted house premise and a few character names is where the similarities to the source material ends:


The novel exhibits enormous restraint, serving as a metaphor for female repression while leaving much open to interpretation. There’s only one scene in the book where two characters verifiably experience the same phenomena; all other supernatural encounters are from Eleanor’s perspective and offer no definitive take on whether the incidents were real or the product of her mind. Many times, we’re led to believe that Eleanor may be having a breakdown due to her inability to function under the prospect of her own freedom, as evidenced by the book’s horrific ending.

While Green attributes the show's problems to its deviations from the novel, I think the series' flaws can be mainly attributed to one root cause: Netflix bloat. Mind you, I am extremely open to slow-paced shows and films -- hell, I am an Andrei Tarkovsky fan! However, this show suffers from being too dragged-out and slow-paced. There just isn't enough meat on its bones. I was bored during long stretches of most of the episodes. I think this show would have been much stronger if it had been condensed to six or seven episodes rather than ten.

A few of the episodes really deliver --  I would single out ep. 4 "The Twin Thing" and ep. 3 "Touch," as being particularly riveting ones. But most of the others range from "dull but with a few good bits" (ep. 5 "The Bent-Neck Lady" and ep. 6 "Two Storms") to "utterly unnecessary" (ep. 8 "Witness Marks"). So overall, despite its high production values, compelling mood, and promising premise, it is hard for me to recommend this show. I am somewhat baffled at the strength and number of positive reactions I have heard about this series from other viewers. 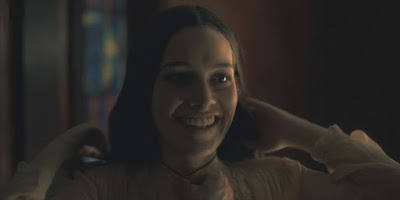 Victoria Pedretti as Nell in the final moments of "The Bent-Neck Lady," one of the better episodes of The Haunting of Hill House.

Specifically, the high points of The Haunting of Hill House include: 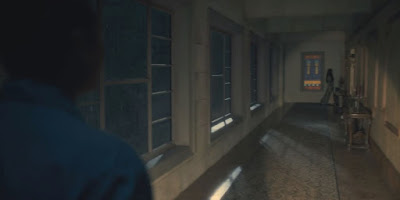 Sadly, for me, the low points -- or really just indifferent, dull points -- overwhelm the positives here. The few really excellent performances  -- Shirley, Nell, Luke, and their mother Olivia -- are swamped by the presence of the other characters that I don't care about (the oldest brother, the father) or that I want to care about but who are under-written and under-deployed (Theo, the Dudleys). Plus the whole happy ending of the finale just feels, as much of the series' emotional moments do, over-determined, cliched, canned. It just doesn't land for me.

I love me a good, tawdry, emotionally heightened family melodrama. I love Hollywood melodramas like Stella Dallas (1937), Imitation of Life (1934 and 1959), Now, Voyager (1942), All That Heaven Allows (1955), etc., and I am a super-fan of the PBS series Poldark (2015-present) -- yet The Haunting of Hill House is too sluggishly paced and too clumsy in (not) landing its emotional beats to earn my recommendation, with the exception of that fourth episode and a couple key moments in eps five and six.

I would instead advise people who want to see a family melodrama fused with a haunting-type story to check out The Sixth Sense (1999) or The Babadook (2014). Those seeking a flat-out great ghost story movie should try the original version of The Haunting or (even better) The Innocents (1961). 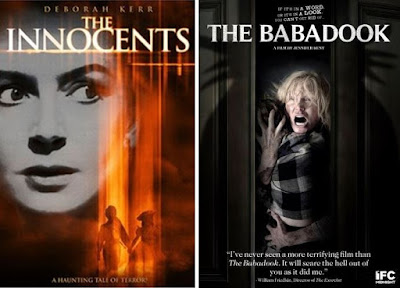