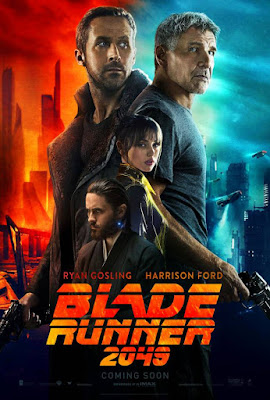 I fucking love Blade Runner. I first saw the original 1982 theatrical cut on VHS in the mid-1980s. That version intrigued me a lot, and haunted me, even though I didn't like the clumsy Harrison Ford voice-overs and weirdly upbeat ending. To be fair, I first came at Blade Runner with little understanding of film noir. Instead, I'd recently seen other fast-paced Ford vehicles like Raiders of the Lost Ark and The Empire Strikes Back. In contrast to these, Blade Runner felt slow and weird, but I still liked it. Its three principal characters -- Deckard, Roy, and Rachel -- stuck with me.

I happened to be living in Los Angeles in 1992 when the so-called "Director's Cut" of Blade Runner was discovered in a vault and screened at the Nuart Theater. That's when my true Blade Runner fandom began. That new version appeared just at the right time for me as a developing cinephile. I had started watching independent cinema, stuff like Do the Right Thing, Slacker, Reservoir Dogs, and sex, lies and videotape, so I was ready for a visually arty, downbeat, science-fictional neo-noir to sweep me away. Indeed, that cut of Blade Runner (and the essentially identical 2007 "Final Cut") remains one of my all-time favorite movies, even though I am made uncomfortable by the coercive nature of Deckard and Rachel's sex scene. I realize the dynamics of the scene are complicated by their both being replicants -- or maybe only Rachel being a replicant -- but it disturbs me. Nevertheless, I love Blade Runner. (I also love the Alien universe, so Ridley Scott has pulled me in twice.)

The film often -- but not always -- touches on the mesmerizing quality that makes Ridley Scott's original so special. As with the noir-inspired original, Blade Runner 2049's main strengths are its beautifully lit visuals of grimy, lived-in settings and its overall melancholic tone. 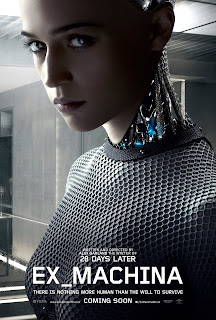 Sure, Alex Garland's Ex Machina (2014) is a more compelling thematic follow-up to Blade Runner and is its true "spiritual sequel" ideas-wise. But Villeneuve's 2049 gets the tone and visuals dead right and introduces the reproducing replicant motif, a logical next step for the franchise that takes the story in an interesting, Pinocchio-like direction. And 2049 ends really well -- both its blade runners get superb final scenes and shots.

Although it ends with a haunting close-up of Deckard, 2049 features minimal -- just enough -- Harrison Ford. It's the new characters' show. Ryan Gosling is pitch-perfect as protagonist "K" aka Joe -- a strong silent type who is nevertheless more emotionally vulnerable than Deckard ever was (or is). Supporting cast members Sylvia Hoeks as Luv, Ana de Armas as Joi, and Robin Wright as Lieutenant Joshi (who I really thought was going to pull one more trick out of her hat before getting brutally murdered -- alas) are also especially good.

2049 does right to stay focused on Joe's present-day story, only bringing in Deckard when he becomes relevant to the mystery Joe is trying to solve. Indeed, too much emphasis on legacy characters weakens Star Wars and accounts for 2049's most awkward and least necessary scene: Niander Wallace's unsuccessful tempting of Deckard with Rachel 2.0.

There is no point to the Rachel 2.0 scene -- we know Deckard would never go for this ruse, and the use of computer generated imagery (CGI) to re-create a circa-1982 Sean Young looks, as CGI Peter Cushing in Star Wars Rogue One looks, uncanny, cheap, and (therefore) jarring.

Rachel sez: "Sorry folks, I should never have been in this sequel."

2049's other main weak point is its almost comically underdeveloped depiction of an underground replicant revolutionary force. That scene only takes place to "explain" how Joe escapes Las Vegas, and there's a million other ways to do that -- he could just hijack some other vehicle from around Deckard's lair. Or the Wallace mercenaries could haul Joe back to L.A. along with Deckard, and Joe could escape at that point. Or he could be taken in the very same airport transport as Deckard, and would end up at the same climactic fight. The thing the rebellion leader tells Joe about his origin is something he could realize on his own -- he already suspects it before that dumb scene.

Deckard being tempted and Joe being rescued by an anonymous replicant resistance movement are stupid and unnecessary scenes. 2049 should just cut from Deckard being taken away in Vegas to "K" commandeering a new vehicle and pursuing him. No Ford / Leto meeting needed. The CGI Sean Young reveal is hackneyed in the film world and the real one.

I have been a Blade Runner fan since 1992 and was likely to want to see this sequel in any case. Yet the stellar track records of Denis Villeneuve, 2049's director, and Roger Deakins, its cinematographer, strongly contributed to my anticipation to see it. Villeneuve has made several excellent films over the past several years, including Prisoners (2013), Sicario (2015), and my favorite, his recent science-fiction film Arrival (2016). Deakins has worked with the Coen brothers since 1997, when he shot Fargo. He shot Prisoners and Sicario for Villeneuve. He also lensed the James Bond film Skyfall in 2012. He utterly rocks.

Is Blade Runner 2049 slow paced? Yes, of course it is. Like the original, 2049 is a bleak, moody, science-fiction film noir -- it is NOT an action film. There are basically two fights, two swift stabbings, and one extremely brief flying car chase. That's it -- the rest of 2049's two hour forty minute running time is people talking to each other on amazingly-lit and -designed sets. Don't expect much action, but expect a visually stunning, fully developed world of the future.

And expect me to crush people.


UPDATE 10/28/2017: After reading my review, one of my friends noted on Facebook that she enjoyed Blade Runner 2049 too but had "some questions about Joi." Indeed, I share her concerns over the sexism of both the original Blade Runner -- the roughness of the Deckard-Rachel love scene has always disturbed me -- and its sequel. Honestly, I agree with everything Lauren Jernigan says in her penetrating article about the pervasive sexism of 2049. She writes:

Joi has very little, if any, true agency as a character. She’s a programmed hologram that will be whatever K needs her to be, so he has his perfect fantasy woman. She is a literal product designed for the happiness of men.

Agreed. Like Jernigan, I find the sex scene with K, Joi, and her hired body double to be quite unnerving. Is this the film's way of critiquing this situation by making me feel unnerved and uncomfortable with it? Or is the film simply reinforcing the role of women as objects of desire for men? It's hard to tell.

In defense of my Blade Runner fandom I can only say that film noir presents a strange case: it is so highly stylized and hyperbolic that I think it is possible to read the genre's abysmal treatment of women as a critique of patriarchal violence. But it is an ambivalent, ambiguous case, and there is no doubt that noirs like the Blade Runner films portray women as "only there to help move the story of men forward, rather than act as protagonists in their own right in a story very much about oppression against them," as Jernigan correctly asserts.

UPDATE 11/8/2017: I also found this piece by Joseph Aisenberg to offer an insightful interpretation of Blade Runner 2049. "Morose and morbidly meditative in tone, it gnaws around the edges of the assumptions underlying its plot mechanics, giving viewers time to think through the fakery in its themes about fakery versus authenticity."
Posted by Carter Soles at 7:09 PM