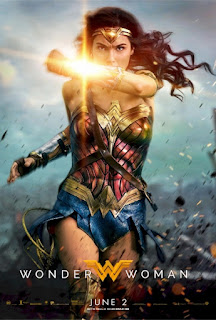 Wonder Woman is a big-budget superhero movie, and despite a couple of clever comments Diana (Gal Gadot) makes near the end about heroes being unable to solve complex problems like war and human corruption, it is fundamentally an earnest one rather than a deconstructive one. That is, it feels like it could have been made ten years ago, and probably it would have felt fresher then, situated among other straightforward origin stories like Iron Man (2008) and Captain America: The First Avenger (2011).

This is not Wonder Woman's fault -- Hollywood has dragged so much goddamned ass finally making an A-grade female-led superhero film that it beggars belief. We have been waiting for a Wonder Woman movie for so many years, even decades, and our having to wait this long for a movie centered on such an iconic character is glaring evidence of Hollywood's deep and pervasive structural sexism.

But the movie is finally here now, and it is a lot of fun. Like all superhero films, Wonder Woman takes its cues from the blockbuster writ large, inheriting its DNA from the 1980s Spielberg-Lucas template. So like any big-budget action-adventure film made in the wake of Star Wars (1977) and Raiders of the Lost Ark (1981), Wonder Woman is entirely predictable. There are no surprises or revelations here -- we've seen all this before.

However, that said, Wonder Woman is well-executed and possesses a few key strengths that make it a pleasure to watch:
That first item is the most important and is what sets this film apart from all the others in the recent DC Universe franchise.* I am sick to death of dark, tortured protagonists in action-adventure blockbusters so when I heard that Wonder Woman was not going that route, I breathed a huge sigh of relief. Wonder Woman's Diana is not quite so upbeat and booster-ish as Christopher Reeve's Superman or Melissa Benoist's Supergirl, but she abides in that general area -- grimly determined but not grim, and generally optimistic about human potential and the human spirit. I like superheroes like that. 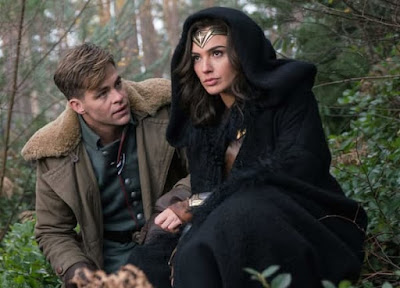 Teamed up with Gadot as Diana is Chris Pine (a personal favorite) as Steve Trevor. He is a delight and his chemistry with Gadot is spot-on. I agree with AV Club's A.A. Dowd that


Pine, with his square-jawed deadpan, bounces nicely off of Gadot’s tourist curiosity; the two actors have a chemistry of innuendo and hesitant camaraderie—the makings of a screwball romantic comedy, simmering around the edges of the story.

Indeed, I wouldn't have minded if the Diana-Steve duo spent a little more time in London exchanging banter and having fun with Etta (a hilarious Lucy Davis) before slogging into the whole combat mission. But this is a blockbuster, there are action beats to get to, I get it. As Dowd puts it, "One just wishes [director Patty Jenkins] were working outside of a house style not already etched in stone." Hear, hear.

At least Wonder Woman avoids annoying franchise hyperlinks that distract from the story at hand. Recall the marred ending of Winter Soldier, about which I have written:


Captain America: The Winter Soldier was okay but should have ended right when Cap comes ashore at the lakeside after the film's climactic battle. Everything else after that is franchise-connection filler and is superfluous to this movie.

Sure, Wonder Woman has a brief frame story in which Diana (in the present day) receives a note and photograph from "Wayne Enterprises" and subsequently sends an email message back to "Bruce Wayne." But there is no pointless cameo by any other DC franchise character or some out-of-context teaser for the upcoming Justice League movie, in which Diana will also appear.** So hearty kudos to Wonder Woman for simply being its own movie, an increasing rarity in today's franchise-dominated blockbuster world.

To characterize it in the terms fleshed out in this post, Wonder Woman is a simple, generic blockbuster. 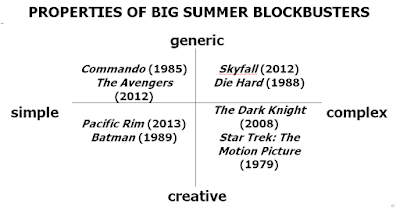 Wonder Woman hangs out on the top left with blockbusters like The Avengers (2012).

Simple blockbusters, indicating the simplicity of their plots, "make pretty clear from the get-go what is at stake" and "do not depend upon mystery or surprise." There is only one major "surprise reveal" of a character's true identity near the end of Wonder Woman, and if you don't see that coming from leagues away, then god help you. No, Diana sets off from Themyscira to do a certain thing, and by the end of the movie she does exactly that.

Generic blockbusters, referring to genre and style, are "films that adhere more closely to the established parameters of their genre, with less evident authorial flourishes or deviations in tone or visual aesthetics." In this context we have to see genre in terms of franchise and branding as well. I would describe Wonder Woman as a generic superhero blockbuster in the Warner Brothers / DC post-Nolan, Zack Snyder-ish style.  There's slo-mo combat, there's a big boss villain, there are super-weapons, there are parent / child things being worked out, etc.

If Wonder Woman has noticeable flaws, they are:

That said, some of the slow motion in the action sequences, used more judiciously by Jenkins than it is in the Zack Snyder-directed movies I've seen, works really well, creating a kind of comic book panel or splash page type effect. Combined with this, Gadot, for me, possesses the physicality, prowess, and aura to really pull off this role. For me, her Diana in Wonder Woman is as visually iconic as Christopher Reeve in Superman (1978) -- I mean that as a supremely positive comment.

In his review, Entertainment Weekly's Chris Nashawaty compliments Gadot's "undeniable star power" and accurately describes Wonder Woman as "assured and sly." He writes that Gadot's Diana "is both awesomely fierce and surprisingly funny" and "her chemistry with Pine is just as unexpected and electric." I agree with these points and with the overall conclusions of that review.

And importantly, as Dowd and others have noted, despite the shortness of her skirt-thingy and a few gratuitous bare-leg shots, the film mostly resists sexually objectifying Diana, thank christ. It's sad that the bar is so low that we are relieved simply when a mainstream film doesn't objectify or ogle its female characters, but there you have it. 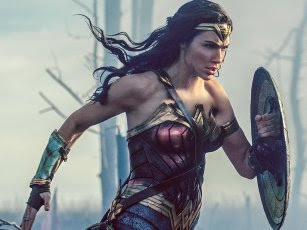 In short, definitely see Wonder Woman if you like enjoyable blockbuster action movies. This one won't condescend to you. It will provide "sly and assured" entertainment and action thrills, Diana's assault on the village of Veld being my favorite instance of the latter. I also really enjoyed the brief alley fight that happens in London. Diana's whip, weapons, and style are cool, and the film's climactic message, while entirely corny, is the sort of popcornish thing I want to hear at this time of year and in these troubled times. That Wonder Woman's message of love comes from the lips of Hollywood blockbuster cinema's first bona fide female stand-alone superhero franchise protagonist is, I think, cause for celebration. Long live Diana, Princess of the Amazons.

UPDATE 6/9/2017: For even more nuanced discussion of the feminist implications of Wonder Woman, read Noah Berlatsky's incisive rundown of how the film fails to acknowledge -- and even works against -- the "sisterhood" elements of the original comics, and also this smart dialogue between Carolyn Petit and Anita Sarkeesian of Feminist Frequency.

---
* Note that I have not seen Man of Steel (2013) nor Batman v. Superman (2016) and don't plan to see either one. I have no truck with a brooding, "dark" interpretation of Superman and I was tired of the "dark" version of Batman by the time The Dark Knight (2008) rolled its end credits.
** To be fair, I did not stick around to see if Wonder Woman has a clunky, Marvel-esque post-credits sequence pointing toward future franchise entries.
Posted by Carter Soles at 2:01 PM