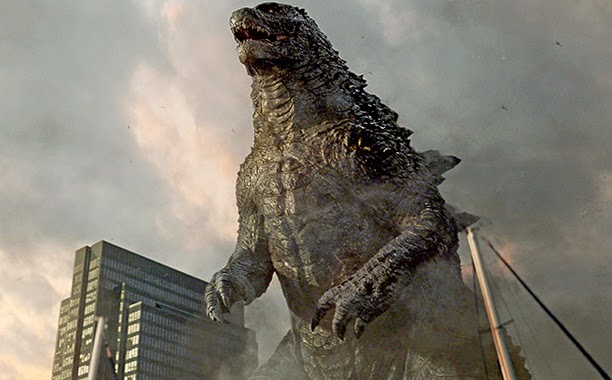 The recent remake of Godzilla is what I call a "noble failure." It tries hard to achieve many interesting things both visually and thematically, but it fails because it just isn't very entertaining or fun or, ultimately, coherent. To be clear, I (mostly) really enjoyed the film as it was unfolding before my eyes, and must state right away that I thought it was quite visually stunning. The MUTO attack at the foggy railroad trestle was one of the best paced and best looking scenes in this film or any action film I have seen in quite some time. The final showdown in San Francisco was beautifully lit and photographed, and most of the scenes of Godzilla -- even though they were too few and far between -- looked frikkin' awesome.

But the film is nevertheless a failure, if a noble one. It failings mainly stem from:

(1) Taking itself too seriously,

(2) Committing some of the worst characterization and character-arc blunders I have seen since The Dark Knight Rises, and

(3) Trying to do too much thematically (or at least not doing it clearly enough).

Going in, I gave this film a lot of benefit of the doubt due to the excellence of director Gareth Edwards' previous feature, the superb Monsters (2010). While I am not a rabid Godzilla fan in the holistic sense, I am a huge fan of the original 1954 Gojira and I have seen and enjoyed my share of other related films such as Rodan (1956), Mothra vs. Godzilla (1964), Gamera (1965), Godzilla vs. Hedorah (1971), Godzilla 1985, Godzilla Against Mechagodzilla (2002), and Roland Emmerich's 1998 "Godzilla" film. But most of my hopes walking into the 2014 Godzilla were pinned on Edwards, and at least in the visual sense, he did not disappoint.

Yet as Lee Weston Sabo puts it, the very skills which served Edwards so well on the low-budget Monsters were misapplied here, creating a distracting "identity crisis" at Godzilla's core:


Oddly enough, [Edwards] used the same techniques he used in Monsters to hide the poor CGI (which he reportedly did on his laptop) to hide the monsters in Godzilla, even though the budget was two hundred times larger, resulting in a lavish Hollywood production that is often obscured from view. Most distracting is a recurring motif where the monsters are shown on a television screen rather than in the flesh. The movie is so embarrassed by its giant monsters that it has to constantly show them on the news to make it seem real.

Agreed. Yet even these errors in judgment might not have seemed so egregious had it not been for the profound mistakes made simultaneously in the character department. Why on earth this film kills off Joe Brody (played compellingly by Bryan Cranston) a third of the way in is one of the most baffling decisions I've seen made in any film -- it is as bad and distracting a decision as the numerous similarly terrible choices made in The Dark Knight Rises.* Furthermore, once the film murders its best character and most logical candidate for protagonist, it subsequently utterly wastes the talents of Ken Watanabe as Dr. Serizawa, who, as the namesake of the original Gojira's protagonist, seemed to me the next best choice to step up and take the reins in Joe's deeply felt absence. But no, Serizawa stands around pointlessly while the straight-laced Admiral Stenz and Joe's boring son Ford get all the best lines and scenes. 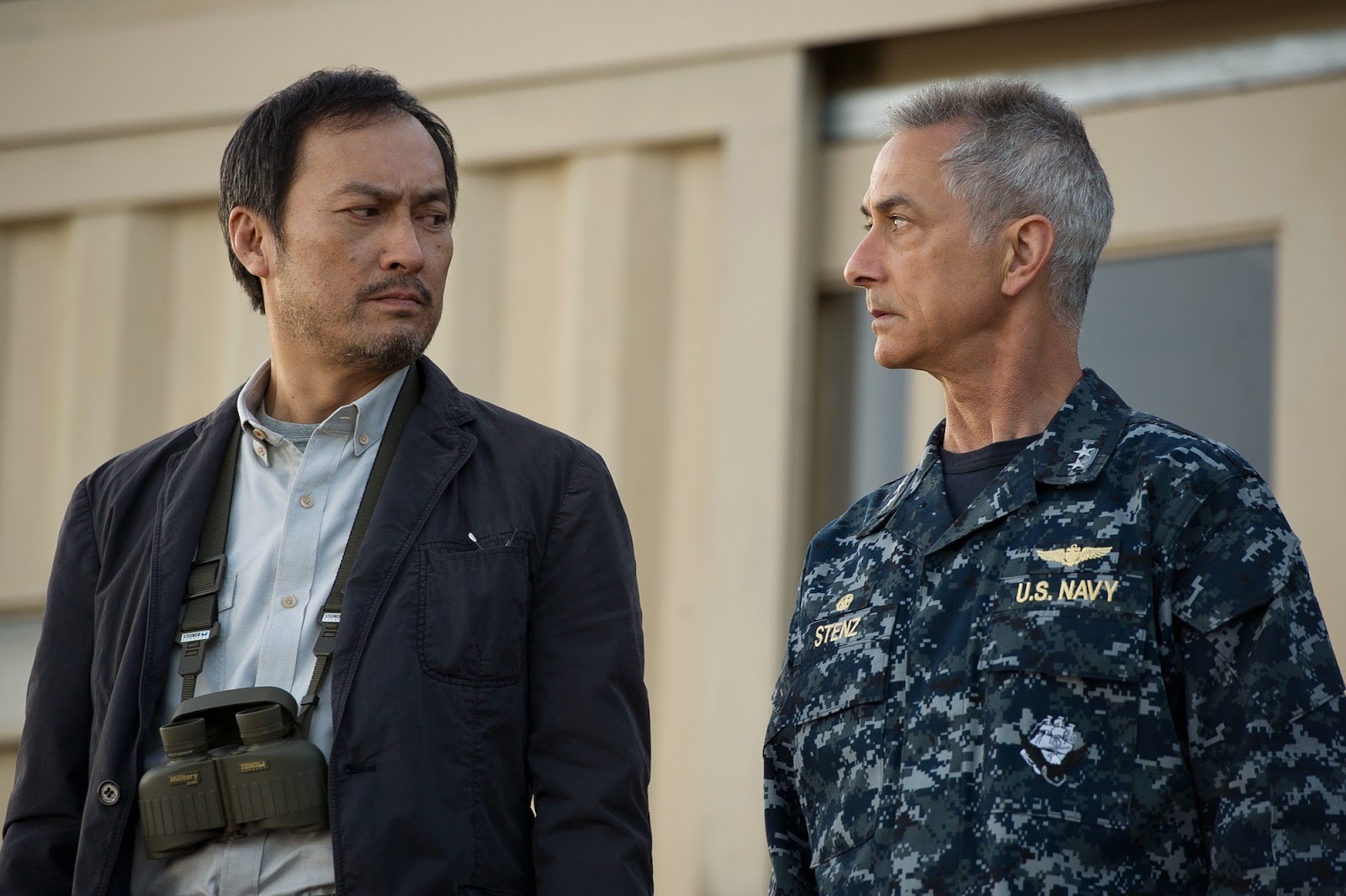 And, as Sabo points out, Ford's role in Godzilla is unmotivated and pointless: "there is no functional reason Dr. Brody could not have been the hero of the film – and, by extension, no reason why Ford Brody needed to exist as a character at all (for instance, even though he’s established as a bomb disposal expert in a plot that surrounds several nuclear bombs, it never actually comes into play)." So even though the main point in a monster movie is to enjoy the monster battles, Godzilla commits a dual sin by depriving us of the monsters AND providing us with a horribly lackluster, "droopy" human plot, as even this mostly positive review of the film admits.

Thus, despite its stunningly impressive visuals, the main problem with Edwards' take on Godzilla is its lack of compelling characters and its over-serious tone. To be fair, these problems are endemic to many contemporary blockbusters, as I have discussed before. In an Entertainment Geekly blog post titled "A Call for an End to Serious Blockbusters," Darren Franich writes that the new Godzilla film is disappointing precisely because it is "so, so serious. Aaron Taylor-Johnson’s mom dies and his dad dies and his wife is a nurse and his son misses his daddy. Godzilla is probably the first movie to not even have fun when it destroys Vegas."

Franich is well aware that this serious, boring, "dark" tone is not unique to Edwards' Godzilla but is a general trend in contemporary Hollywood filmmaking -- he writes that


this whole vogue for seriousness has become a tic: For the filmmakers, but also for the studios, for the marketing teams, for the whole apparatus behind Hollywood blockbusters. And for us, the audience, too. There’s a tendency to throw this seriousness on Christopher Nolan’s doorstep, but mainstream geekstuff was turning in that direction long before Batman Begins. You could start with Bryan Singer’s moody X-Men. Or you could point to Peter Jackson’s decision to de-Bombadilize Lord of the Rings. Maybe it’s George Lucas’ fault, devolving Star Wars from a fun-times space adventure to a mopey-faced parliamentary melodrama.

In any case, Franich bemoans this trend (in a very smart article I encourage you to read in full) and names Pacific Rim as a positive counter-example to this tendency, a view I wholeheartedly agree with. 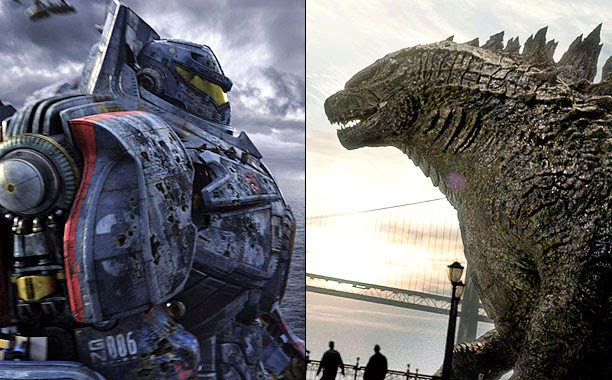 Thematically, the new Godzilla appears to want to re-engage with the 1954 original's indictment of nuclear weapons, but seems confused about what its actual stance on this issue might be.** Is the 2014 version pro-nuclear or anti-nuclear? It is hard to tell. The film does not endorse Admiral Stenz's ruthless approach to detonating nukes in the San Francisco Bay, yet it is pro-military and does not seem all that troubled by the existence of nuclear weapons in general. Sabo labels this ideological muddle "a vague commentary on environmentalism" that ultimately means very little in the context of the film. And despite Robin L. Murray's contention that the film "provides a space in which to explore the complexities of a monstrous nature humanity both creates and embodies," conveying the message that "monstrous nature may also save us," I must agree with Sabo that the film carries self-contradictory and confusing messages along this line.

All that said, I look forward to Edwards' next attempt at the franchise -- he is currently contracted to direct Godzilla 2 and Godzilla 3 -- and hope he and his team will learn some valuable lessons from the mixed critical response to the 2014 Godzilla. If he can bring a bit more zip and fun to the next installment, if he can build upon his accomplished visual style to get us more invested in both his human and non-human protagonists, then he might overcome this noble failure and make the potential-laden Godzilla franchise so much better.

Bonus Afterthought: Though I understand why Godzilla purists despise it, I am not a hater of the Roland Emmerich Godzilla and am inclined to agree with Gabe Toro's claim that the much-maligned 1998 version is at least a rip-roaring good time.***

--
* That is, the utter pointlessness of Matthew Modine's character, the severe, plot-crippling under-development of Talia al Ghul, and the totally disastrous decision to have Michael Caine's Alfred, the only remotely believable and relatable human being to appear in the entire Dark Knight trilogy, vanish for the bulk of the film's run time.
** Sabo calls the 1954 original "ham-fisted" and criticizes its "audacity and crudity [in] trying to seriously represent the horror of Hiroshima and Nagasaki with a man stomping around in a rubber dinosaur suit." Yet I find that audacity somewhat admirable and compelling, and would add that the dark, gloomy tone of the 1954 version helps its theme to "land" with me despite the film's exploitative dimensions.
*** Anyone interested in reading a more detailed discussion of the merits of Emmerich's 1998 version should read this Vanity Fair piece, which makes the bold claim that "if you love the 90s, you pretty much have to love 90s Godzilla."