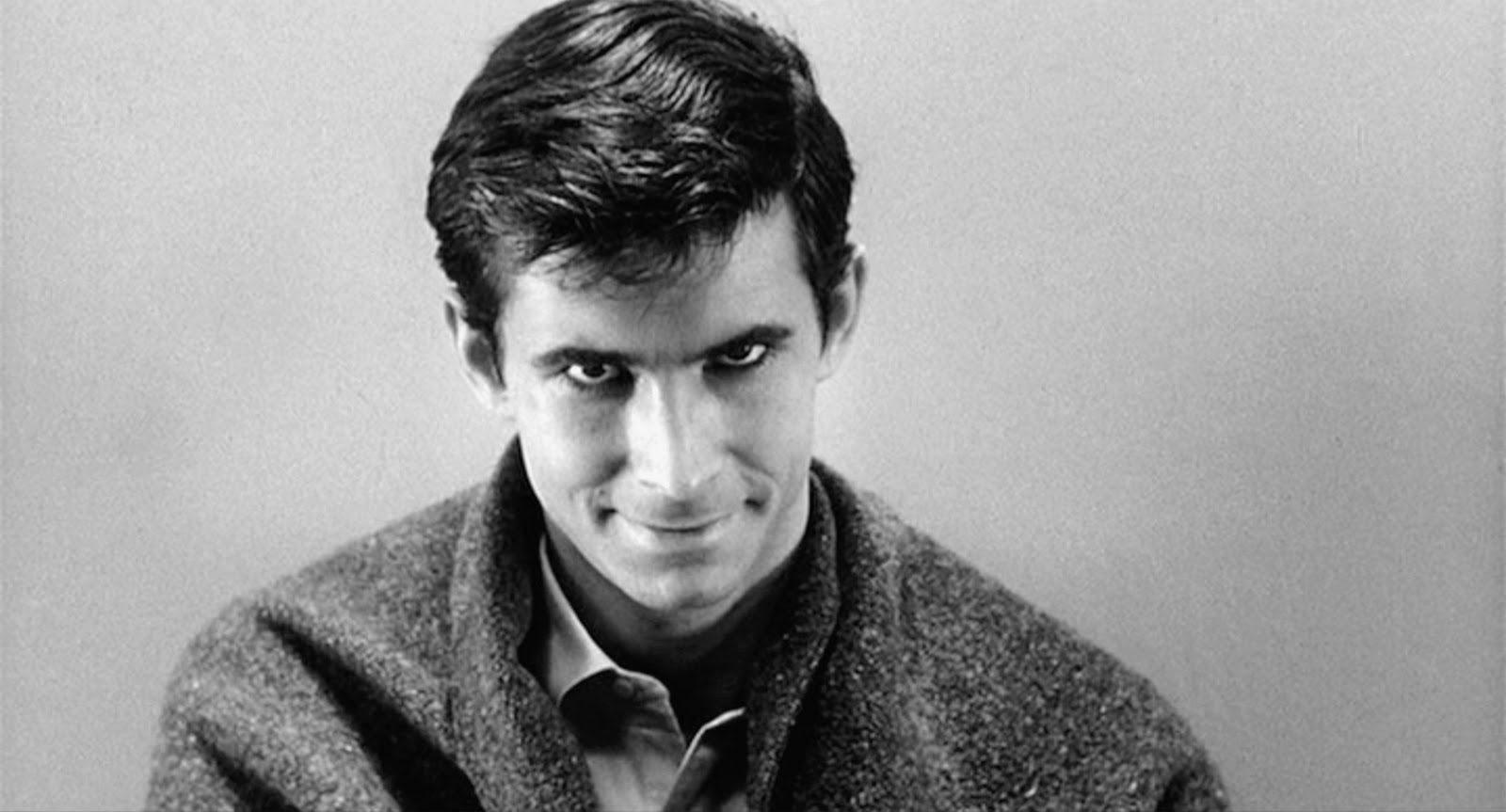 I should mention up front that I am quite favorably biased toward this film; it is one of my all-time favorites.

It is impossible to discuss Alfred Hitchcock's Psycho without first discussing Michael Powell's Peeping Tom (1960); the two are closely related cinematic doppelgangers. Peeping Tom was released in Great Britain several months before Psycho's U.S. release, and what happened to Powell's film proved a valuable lesson for Hitchcock. Peeping Tom depicts several weeks in the life of a cameraman / serial killer named Mark, whose murders are depicted in shocking first-person point-of-view. The film's opening moments consist of just such a disturbing sequence; Peeping Tom provides a prototype for the lengthy, handheld, first-person murder sequence that opens John Carpenter's Halloween eighteen years later. Adding to its gruesomeness -- and unlike Psycho -- Peeping Tom is shot in color.

It turns out that the British public, and especially the press, was not ready for such an explicit indictment of the close connections between cinematic voyeurism, desire, and murder in April 1960. Peeping Tom was roundly condemned by the London press and director Powell was blacklisted.*

Carl Boehm as Mark Lewis, protagonist of Peeping Tom and
an important precursor to Norman Bates.

Hitchcock, preparing to premiere Psycho in the United States in June 1960, observed what happened to Powell as a result of Peeping Tom's disastrous critical reception, and made a key decision that there would be no press screenings for Psycho. Powell's film had made clear to Hitchcock that he needed to get his own very similar film in front of paying audiences before the critical establishment had a chance to condemn it for its provocative shower sequence, (relatively) sympathetic portrayal of a serial killer, and -- gasp! -- the first-ever depiction of a flushing toilet in a Hollywood film.

Of course, Hitchcock's release strategy for Psycho, which included lobby posters urging filmgoers to keep the film's narrative twists secret and a mandate that no exhibitor allow anyone into a screening of the film after it had begun, were also part and parcel with his general flair for showmanship and his interest in delivering maximum thrills to his audiences. However, the British reception of Peeping Tom also factored into Hitchcock's decision to enact these measures, and in many ways Powell's equally frightening and masterful film deserves kudos for "taking the hit" with the British public on Psycho's behalf.

Regarding Psycho, there isn't much I can say about this enormously influential film that hasn't already been said by smarter writers. Psycho is probably the most-written-about English-language film of the sound era.** It has been claimed as the first slasher horror film, or at least the structural prototype for that enduring subgenre. It also represents the apotheosis of Hitchcock's career-long obsession with point-of-view: the opening sequence alone, in which the camera pans over a Phoenix cityscape and then tracks into a window to find Marion Crane trysting with her lover Sam, implicates the viewer in an act of sexually charged voyeurism more explicitly than does any previous Hitchcock work. Then, when Psycho switches our onscreen point of identification from Marion Crane to Norman Bates about thirty minutes in, it revolutionizes the thriller genre and changes the rules for cinematic identification and point of view from this point forward. The first-person point-of-view camera work that pervade influential slashers Black Christmas (1974) and Halloween (1978) are made possible via the example and influence of Psycho. 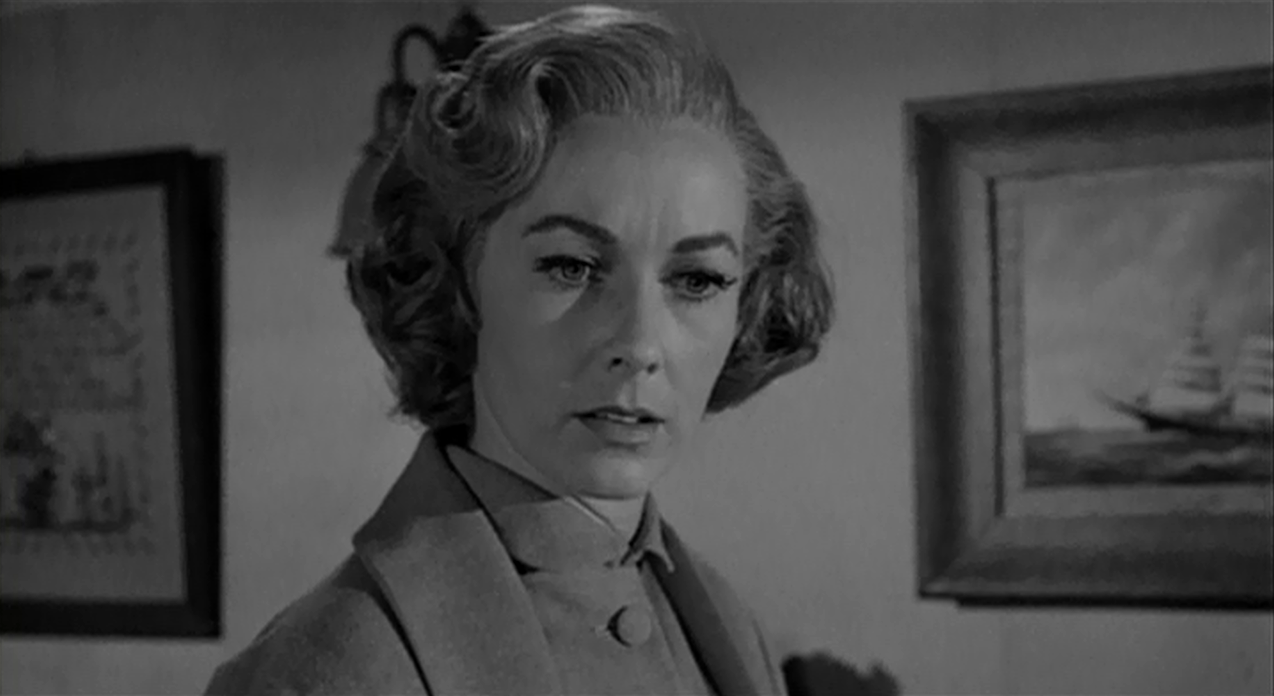 Vera Miles as Lila Crane, one of the great Hitchcockian female detectives.***

The film itself is an utter delight. While some critics, Robin Wood among them, claim that only the first twenty-five minutes of Psycho (up to and including the shower scene) is worthy of true "masterpiece" status and that the second half loses focus, I contend that the whole damn thing hangs together beautifully. It is true that once Marion (Janet Leigh) leaves us, her narrative function is taken over by a diffuse ensemble including boyfriend Sam (John Gavin), sister Lila (Vera Miles), and private detective Arbogast (Martin Balsam), all of whom pale in comparison to Perkins as Bates. That Bates is the most interesting character left alive at that point is Hitchcock's whole purpose, but I can see where the lack of a clear "good guy" (or gal) would be off-putting for some viewers. 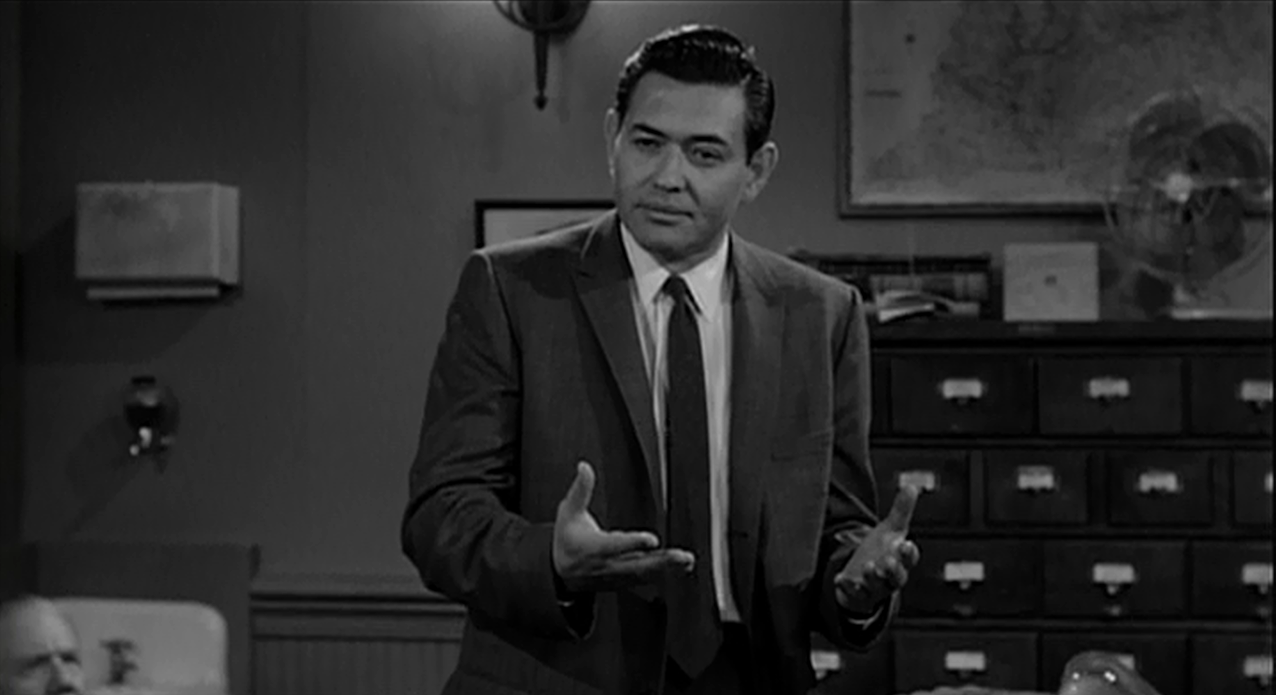 It is also true of Psycho that the psychiatrist scene near the end does slightly impede the momentum of the film's last seven minutes or so. Yet I think the psychiatrist scene is necessary for setting up the penultimate shot of Norman/Mrs. Bates in the asylum, and that makes it all worth it. Not to mention that Hitchcock gets in one last dig with the film's true final shot: Marion's car being dragged up out of the swamp. The film begins and ends with Marion. 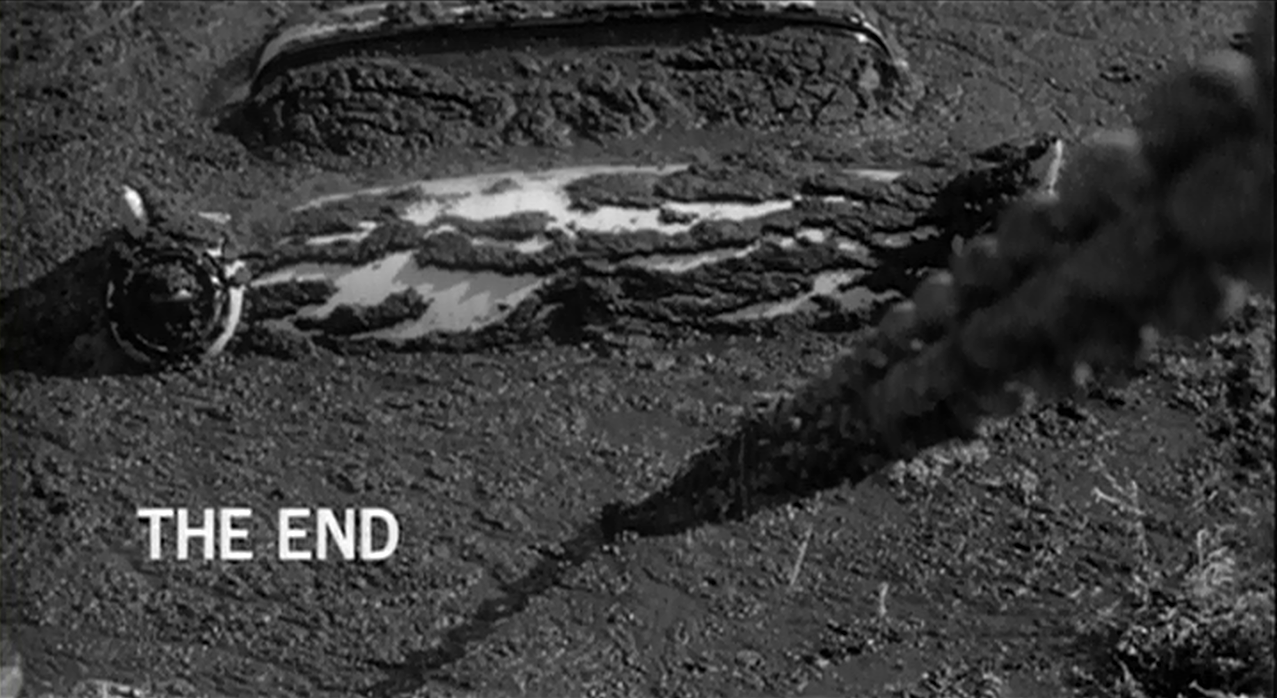 Bonus Afterthought: Two different behind-the-scenes dramatizations of Hitchcock's late career, The Girl (dir. Julian Jarrold) and Hitchcock (dir. Sacha Gervasi) were released in 2012. Although some critics find something to enjoy in the factually inaccurate and emotionally lackluster Hitchcock, I must cast my lot with those who find it to be the cinematic equivalent of a badly-shaped piece of dung. I normally like Anthony Hopkins, but his performance in Hitchcock feels phoned-in and misses Hitch's real-life deliberate speech mannerisms. The whole film is a shoddy affair from tip to tail, very badly done, and I cannot recommend it. By contrast, The Girl is flat-out excellent. Toby Jones plays a much more interesting and convincing Hitchcock than Hopkins does and the film is far better made than Hitchcock on all fronts. Plus The Girl puts forth a provocative thesis: it assumes that Hitch was erotically interested in The Birds' leading lady Tippi Hedren and that he actually made inappropriate moves on her. While that has never been concretely established, I think some lecherous tendencies probably existed in Hitchcock and I like the film's willingness to explore that dark side of him, connecting it to how he treated the (post-Grace Kelly) platinum blondes in his films. I recommend The Girl to anyone; it is artfully shot, energetically acted, well-scripted, and well-paced, especially compared to the much more predictable and dull Hitchcock. 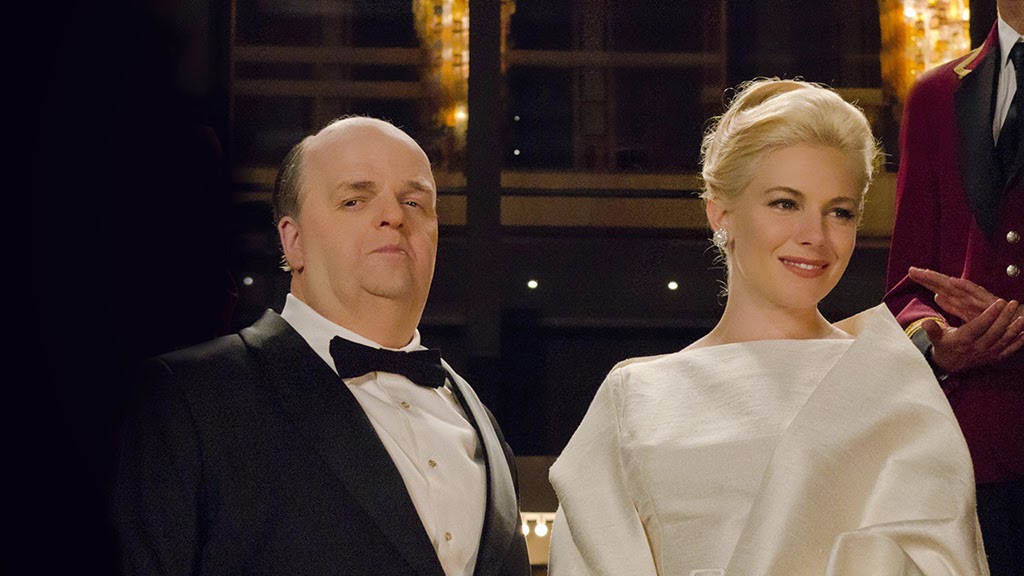 Toby Jones as Alfred Hitchcock and Sienna Miller as Tippi Hedren
in HBO's excellent The Girl.

--
* From A Very British Psycho (1997, dir. Chris Rodley), a documentary found on the Criterion Collection DVD of Peeping Tom. This documentary reveals that Powell's career in England ended due to Peeping Tom and that he emigrated to Australia soon after its release.
** A short list of key scholarly titles about Hitchcock and Psycho includes Tania Modleski's The Women Who Knew Too Much, Robin Wood's Hitchcock's Films Revisited, Deutelbaum and Poague's A Hitchcock Reader, Kaja Silverman's The Subject of Semiotics, Stephen Rebello's Alfred Hitchcock and the Making of Psycho, and one chapter in Alexander Doty's Flaming Classics.
*** See also Young Charlie in Shadow of a Doubt, Lisa Fremont in Rear Window, Barbara Morton in Strangers on a Train, and the second Mrs. de Winter in Rebecca for more examples of this type.
Posted by Carter Soles at 8:08 PM