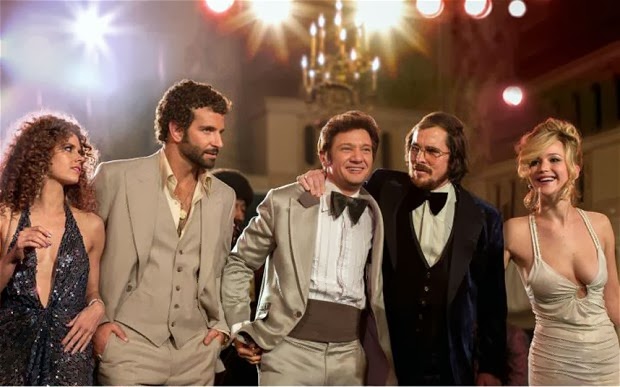 The cast of American Hustle, who are inconsistently directed
in this sprawling mess of a film.

I finally saw David O. Russell's American Hustle, a week after it was snubbed in all categories at the Academy Awards, and to be blunt, I was mostly underwhelmed. I really enjoyed a few of the performances, especially Christian Bale's, but I thought the film was extremely uneven and, despite a few glimmers of genuine fun, mostly quite boring. In my view, Hustle is another entry in the "my post-Huckabees career sucks" phase of Russell's tumultuous directorial trajectory, and herein I will attempt to briefly explain why.

See, I am a huge fan of Russell's pre-2010 work; while his 1994 debut Spanking the Monkey isn't for everybody, I think Flirting with Disaster, Three Kings, and especially I Heart Huckabees are all just terrific. I would even call Huckabees a contemporary dark-comic masterpiece, surely Russell's most compelling and wickedly enjoyable film to date.*

Yet as this article documents, Russell seems to have been severely humbled and discouraged after Huckabees failed to hit big in 2004, and nowadays, in order to keep working in Hollywood, he has "fully accepted the ideology of an increasingly risk-averse industry that making unconventional, brazenly original work is somehow patently offensive and selfish." This seems to square with how Silver Linings Playbook and American Hustle both strike me: as slightly offbeat yet extraordinarily conventional, even formulaic films that lack any of the remarkable, genre-mashing freshness of Russell's earlier work. For example, Linings is a totally by-the-numbers, male-centered romantic comedy with an unbalanced weirdo as its male lead -- if you like that film, you'd probably be better off seeing Punch-Drunk Love or even Safety Not Guaranteed -- and Hustle is a tonally disorganized mess trying to be a crime film. Don't get me wrong, I can find things to enjoy in Russell's recent movies. It is obvious that the man still cares about what he does, and that he can surely direct individual scenes very capably. It's just that he isn't pushing himself very hard or reaching very far artistically anymore, and that lack of risk-taking or striving seems to be causing him to go a little stir-crazy within the narrow narrative and generic parameters he has now accepted for himself.**

So, American Hustle. I frankly could not tell if this film was supposed to be a "real" heist film or a parody of one. Unlike Martin Scorsese's GoodFellas, to which this film owes an obvious debt, Hustle fails to blend its moments of comedy with its moments of gravitas with much effectiveness or consistency. For example, the character of Carmine Polito (Jeremy Renner) is mostly played straight, and Bale treats Irving Rosenfeld, his own somewhat humorous yet likable character, with some nuance, but Richie DiMaso (Bradley Cooper) is a ridiculous caricature of an FBI agent that seems to be visiting the Hustle set from an entirely different (comedy) movie. It is impossible to accept his feelings as real because every moment involving him -- comedic or faux-tragic -- is overplayed to the point of parody. This is not Cooper's fault; it is in the script or (more likely since so much of the film was improvised) the direction.

In short, in terms of tone, Hustle is a convoluted mess. The crowning moment of failure for me, the moment I knew the whole thing was broken, is when an extraordinarily iconic actor strongly associated with the 1970s gangster genre shows up in a cameo. Without spoiling things by naming him, I will simply state that his appearance is so distractingly inappropriate that I became totally convinced at that point in the proceedings that Russell had indeed intended to make a parody film but had simply not made it funny enough to make its parodic intent consistently clear throughout. 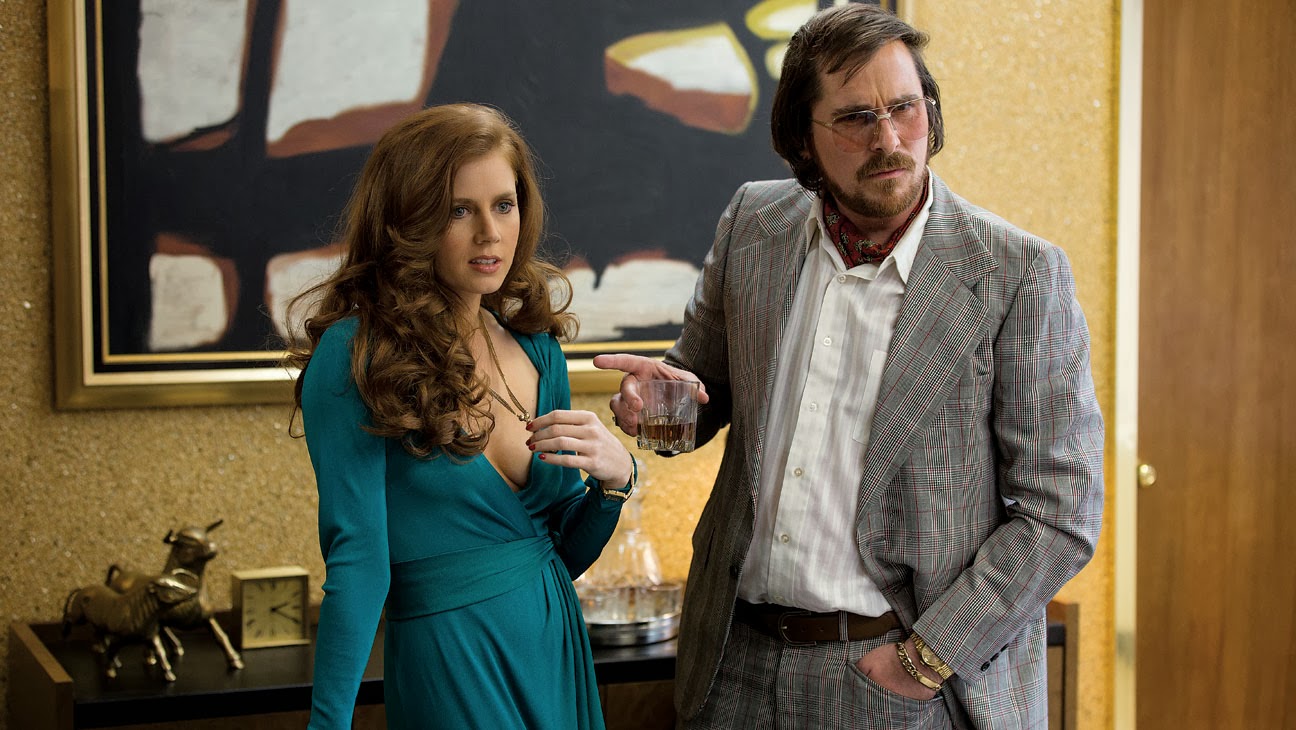 Amy Adams and Christian Bale give the two best performances in Hustle, allowing for occasional moments of wackiness within otherwise believable characterizations.

Unfortunately, though, I don't think parody is what was intended, as the performances by the film's two leading ladies seem to indicate. Amy Adams' Sydney is especially believable and relatable, and, along with Bale's and Renner's characters, really grounds this movie -- to the extent that something this uneven and inconsistent can be grounded. Jennifer Lawrence's Rosalyn is an extreme character as written, but is played well, and should have been the most batshit-crazy element in an otherwise more lived-in set of performances. But unfortunately, Cooper's Richie out-histrionicizes Rosalyn at practically every turn, and that imbalance, combined with too-excessive "1970s" mise-en-scene and several pointlessly heavy-handed musical montages, contribute to the overall feeling of over-the-top incomprehensibility here. What this film really needs is some toning down of the acting and set design, and a couple more editing passes. Trapped somewhere inside the bloated American Hustle we were given is a really delightful 90- to 100-minute heist film parody, and that is a movie I would really like to see.***

Did I enjoy some moments in American Hustle? Yes, for sure, especially when Bale was onscreen. But were there at least as many moments of baffling incomprehensibility, careening shifts in tone, and outright boredom as there were enjoyable ones? Yes.

Do I want the David O. Russell who made I Heart Huckabees back? You bet.

UPDATE 7/2/2016: Film Crit Hulk shares my disdain for American Hustle, arguing that "THERE IS ALMOST NO REAL CHARACTER SEQUENCING OR MEANING OR IMPORT OR THEMATIC COHESION OR DIRECT PURPOSE TO MOST OF THE SCENES IN AMERICAN HUSTLE." His insightful piece outlines director David O. Russell's mid-career about-face in much greater detail than I could, calling the disappointing second half of Russell's career a "FALLRISE" -- "THE WORD FOR A FILMMAKER WHO HAS FALLEN FROM THE NOBLE, EMBATTLED GRACES OF PURE ARTISTRY AND IS WHOLLY REWARDED FOR IT." Hulk concludes that Russell's recent work "FEELS LIKE A WORLD CHAMPION CHESS PLAYER THROWING A GAME TO A 10 YEAR OLD." Sad but accurately said!

--
* To be fair, I haven't yet seen Russell's 2010 film The Fighter, so cannot judge it for myself or factor it into this sweeping claim.
** I recognize the irony of calling a man like Russell -- known for his extreme intensity on set in the early days -- "stir-crazy" now that he has noticeably mellowed in terms of his process. What I mean here is that he has gone artistically stir-crazy, he is eating his own tail and losing focus now that he is no longer pushing himself creatively.
*** For example, much as I enjoyed them in and of themselves, every single scene with Louis CK should have been cut from Hustle, as those scenes did practically nothing to move the film forward and only contributed to the out-of-place ridiculousness of Cooper's FBI agent character.
Posted by Carter Soles at 6:28 PM