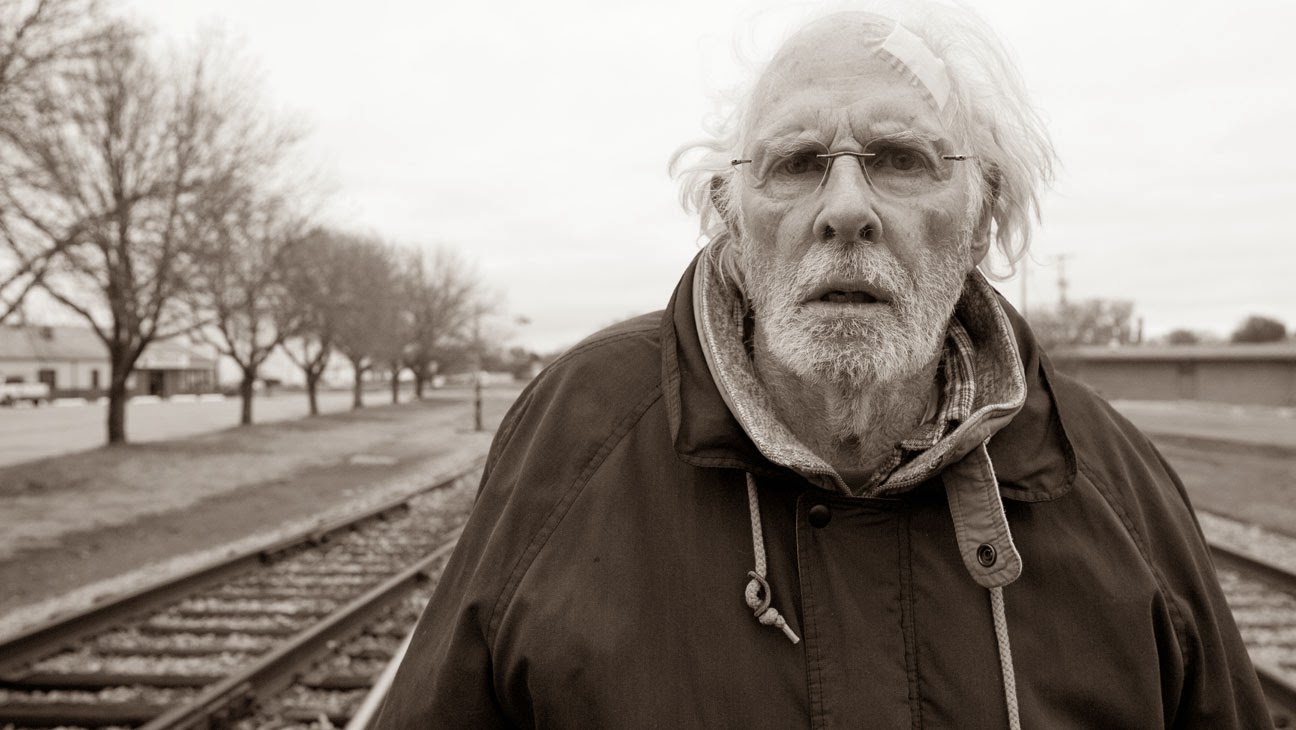 I saw Alexander Payne's latest film, Nebraska, a couple of weeks ago, and I was blown away. It was completely delightful and satisfying, definitely the most enjoyable filmgoing experience I have had in quite some time. I was utterly enchanted the whole way through. With the exception of one extraordinarily minor hiccup, to which I will return, the film was flawless. I strongly suspect that Bruce Dern's lead performance was the best performance by a Hollywood film actor last year.*

Up until I saw Nebraska, I would have said that director Payne's best film (by a long shot) was 1999's Election, a razor-sharp, expertly wrought satire starring Matthew Broderick and Reese Witherspoon. Election is one of my all-time favorite comedies, and while it technically did not make my (arbitrary and bullshittish) top 40 films list back in November, it probably should have.

In addition to Election, I would single out Citizen Ruth (1996), another hilarious and intelligent satire, as the other standout entry in Payne's body of work, which also includes such films as Sideways (2004), About Schmidt (2002), and The Descendants (2011). Of those three, the latter is my favorite, though I think it is a bit lopsided and uneven: Descendants starts out foregrounding the voice and point of view of the youngest daughter, Scottie (Amara Miller), but then shifts partway through to become exclusively focused upon Matt (George Clooney) and, to a lesser degree, Alexandra (Shailene Woodley). What happened to Scottie's interesting point of view? It just inexplicably fades away, to the film's ultimate detriment.

Despite these potential weaknesses, however, I still found The Descendants to be much more rich, interesting, compelling, and character-driven than either Sideways or About Schmidt. I just did not click with Sideways and have never understood its (cult) popularity. I liked Thomas Hayden Church's performance in it but little else; the movie struck me as an overdramatic paean to white masculinity, and while I assume it was intended as satire, the satirical elements just did not land for me, so it felt overwrought and false. About Schmidt is Payne's most uneven and aimless film, a tale about an aged retiree (Jack Nicholson) who goes on a road trip for some reason I cannot now recall. In retrospect, thematically at least, Schmidt feels like an early dry run for the vastly superior Nebraska.

Nebraska is simply pitch-perfect, with superb casting and memorable, funny, and moving performances by all its principle cast members: Dern, Will Forte, June Squibb, Bob Odenkirk, and longtime personal favorite Stacy Keach. Dern's Woody is cantankerous and crusty, but not in the stereotypical or predictable ways you might imagine. What slowly comes out over the course of the film, always subtly, never with a heavy hand, are the ways in which Woody has suffered, yes, but also the ways he has found to be consistently generous and loving toward those around him. Similarly, what at first appears to be a cliched, antagonistic relationship between Woody and his domineering wife Kate (Squibb) is revealed (slowly and surely) to be a relationship of surprising depth and largely unexpressed yet palpable tenderness. Kate's last scene in the film is one of the most touchingly rendered moments of love I have seen in any film for many years. In a movie full of knockout performances, Dern and Forte sparkle
as Nebraska's central odd couple.

Although the film sports many top-notch supporting performances -- Odenkirk, for example, is perfect as the taciturn yet not quite prickly older brother -- Nebraska mainly belongs to Dern and Forte, who make a wonderful road-movie odd couple. I am not familiar with Forte's prior work on SNL, but he shines here as a patient, hangdog, and ultimately quite noble younger son who goes the extra mile (literally and figuratively) to learn more about what makes his verbally reticent father tick. Forte's David is our onscreen proxy, he makes Woody accessible to us, and his droopy, melancholy eyes alone are enough to draw us in and make us feel for this somewhat drifting and lost soul. Despite his initial exasperation with Woody's antics, it turns out that David needs his father at least as much as the latter needs him; aiding Woody in his quest to reach Lincoln, Nebraska helps David get focused on what really matters to him, which is his family ties.

Lest I have made Nebraska sound too heavy or sappy, it isn't; in fact, it is one of the most wry and funny movies I have seen in years, and Payne's funniest since Election. It is mainly a comedy that periodically drifts into dramatic territory, but always with subtlety and a light touch. Even in its serious moments it is more nostalgic and wistful than melodramatic. Between its brilliantly paced script and beautiful black and white cinematography, Nebraska ultimately evokes a deep appreciation for how the past, while far from being a trap we cannot escape from, nevertheless shapes every aspect of who we are in the present. The Grant family -- largely, it turns out, through Kate's agency -- have escaped the stultifying mire of small-town life in Hawthorne, Nebraska and have moved on, yet, as the film shows, revisiting and remembering where they came from gives them unique and crucial insights into how they interrelate (or have failed to interrelate) in their new life in Billings, Montana.

If Nebraska has one flaw, it is in how it handles one single moment in one of its climatic scenes. I will keep this review spoiler-free, but suffice to say that I would have liked to see David handle his final confrontation with Ed Pegram (Keach) a wee bit differently. Although the audience I saw the film with gave subdued cheers and applause during that scene as it is, I would have liked to see a little more restraint exercised in that scene; it felt like the one moment in the whole film that might be tonally out of step with the whole.

But that is a minor quibble about a film that is surely Payne's best movie to date and also one of the best films of last year. Had I seen Nebraska early enough, before I wrote my end-of-2013 roundup, it would have been discussed alongside 12 Years a Slave and Spring Breakers as one of my very favorite films of 2013. I simply cannot recommend it highly enough -- it is everything that great, moving, delightful, thoughtful, humanist cinema should be. The American cinema -- and the world -- would be a better and more enjoyable place if there were more beautifully crafted, funny, and subtly profound films like this one.** 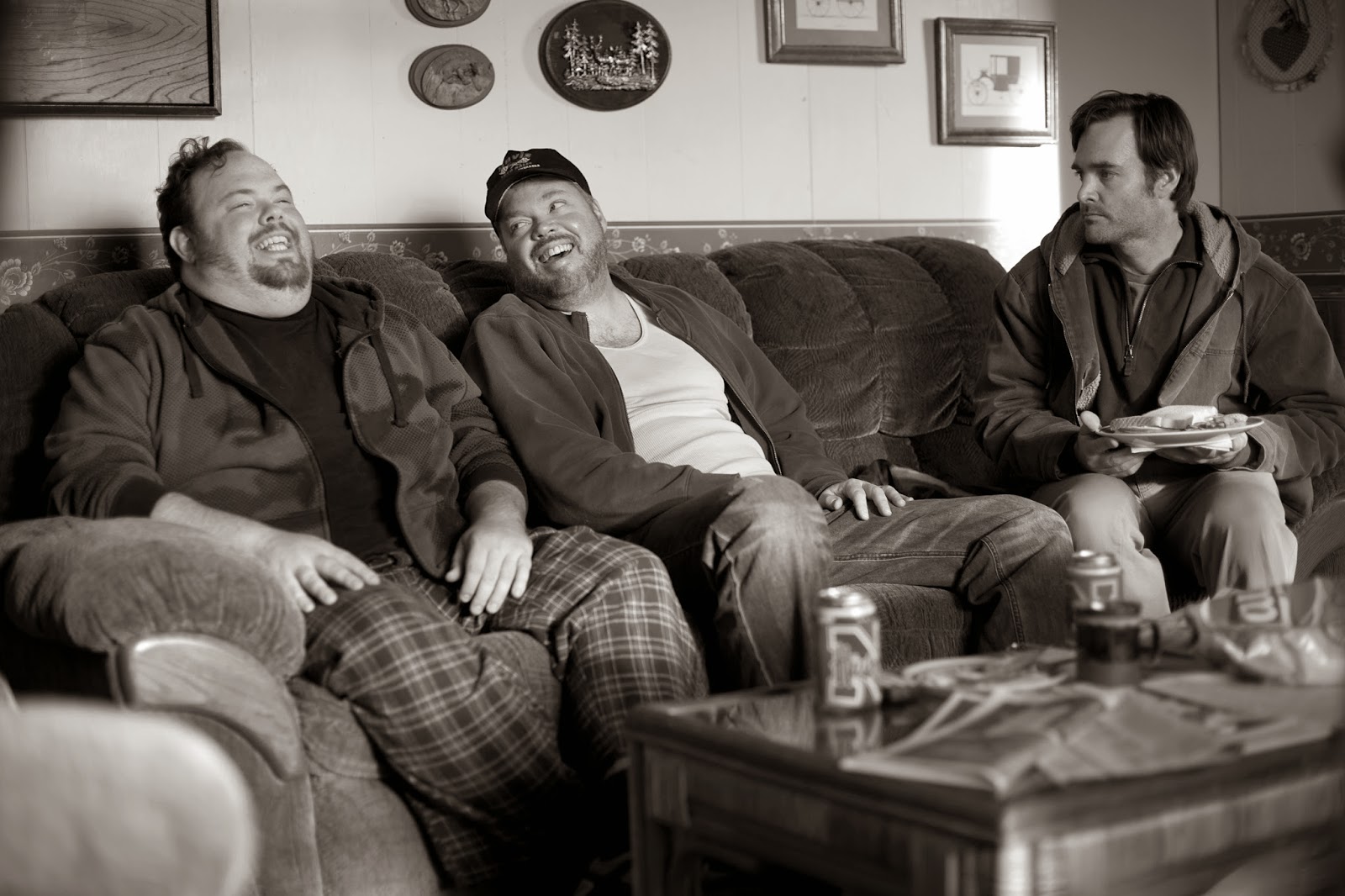 Probably the most hilarious supporting characters in Nebraska are these two
ne'er-do-well cousins of David's. "Three days!!"

--
* Though I have no critical respect for the Academy Awards -- since they primarily measure which mediocre films of the past year conducted the best behind-the-scenes Oscar campaigns -- I am nevertheless using them as a yardstick here, and since I have not yet seen McConaughey's Oscar-winning performance in Dallas Buyer's Club, I feel I should not unequivocally declare Dern's performance the best one. But I have a feeling that Mr. Dern was unjustly robbed at the Oscars.
** One reason (among many) there needs to be more films like Nebraska is due to its focus on the lives and concerns of older people. There are so few good films addressing that demographic, and to get such a funny and revealing peek into the lives of characters like Woody and Kate is an all-too-rare treat seldom to be found in Hollywood's youth-obsessed fare.
Posted by Carter Soles at 8:04 AM