Let me begin by saying that I am a Rob Zombie fan -- that is, a fan of his film directing, if not his musical career (of which I am mostly ignorant). I am also a horror fan, particularly devoted to the same 1960s and '70s horror films (The Texas Chain Saw Massacre, The Hills Have Eyes, Halloween, etc.) that seem to most inspire Zombie.

I see Zombie's work as being in some ways quite similar to Quentin Tarantino's: both directors rework certain film genres -- for QT, it's gangster films, Hong Kong action pictures, and Spaghetti Westerns; for Zombie it's various horror subgenres mixed with a little bit of Hollywood Renaissance* -- in a way that allows them to pay homage to past works while stamping their films indelibly with their own contemporary authorial signatures. 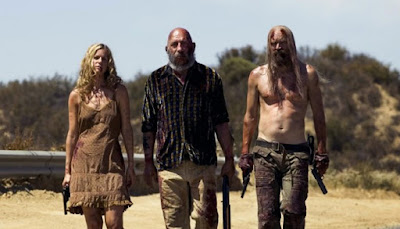 I went into watching Zombie's The Lords of Salem with some excitement, since in general I really vibe with Zombie's style, but also with some deliberately lowered expectations, since I knew from sources like this review that The Lords of Salem may not be his greatest film to date. And indeed it isn't. In fact, at the level of plot and character development, it might be his weakest effort since his remake of Halloween (2007). However, in terms of visual style, Lords is head and shoulders above all of Zombie's previous films, a real aesthetic leap forward that makes me incredibly eager to see what he will direct next.

Did Zombie borrow much of Lords' visual style from Stanley Kubrick's The Shining (1980), as the Red Letter Media guys so keenly observe? Yes, of course. But that does not lessen his achievement any more than Tarantino's relentless borrowing from Sergio Leone and others** can be said to lessen the impact of his films. These guys are postmodern directors, liberally employing the technique of bricolage, in which a work is created using whatever materials happen to be available; in this context, that would be materials borrowed from previously released films and film genres. Like Tarantino, Zombie knows exactly what he is doing here, and the visual style -- austere, with many long takes, slow tracking shots, and unusually high or low camera angles -- suits the material perfectly and is executed with great panache. This is surely Zombie's artiest film yet, and if it doesn't quite hit the mark in all areas, at least it represents an attempt to break free from his previous, music-video-meets-1970's-Hollywood visual style. In short, at the very least The Lords of Salem represents an imperfect yet still very absorbing aesthetic exploration.

This unusual high-angle shot is one example of Rob Zombie's
visual innovation on The Lords of Salem.

So where does Lords fail? Mainly in declining to provide us with the kind of crazy yet relatable characters that inhabit Zombie's prior films, especially the Firefly Family in their film duology (House of 1000 Corpses and The Devil's Rejects) and the wonderful Dr. Loomis in both Halloween films but especially Halloween II (2009). The sedate tone of Lords seems to permeate its characters too deeply, and while that is somewhat appropriate where Heidi Hawthorne (Sherri Moon Zombie) is concerned -- she becomes sickly and possessed early in the proceedings and is near-catatonic through the second half -- I was disappointed that so few of the supporting characters really came alive or held my interest; the two notable exceptions are Judy Geeson as Heidi's mysterious landlady and Bruce Davison as a buffoonish witchcraft scholar who gets in way over his head. Meg Foster is also excellent as chief witch Margaret Morgan but she isn't given much screen time.

So who should see this film? Surely all Rob Zombie fans should check it out, as should folks who are particularly interested in the "Satanic possession" and/or "Gothic melodrama" subgenres of horror. While this film is not as lively as The Exorcist (1973) nor cumulatively effective as The Shining, it owes a debt (and pays direct visual homage) to both, so would be enjoyable for anybody savvy enough to pick up on those intertextual references. I would also recommend the movie who is generally interested in visually striking art films, for that is surely what The Lords of Salem is: slow, stately, moody, and visually dazzling, with the most intricate, beautiful, and uncanny mise-en-scene yet featured in a Rob Zombie film.

In sum, if you like to look at horrifically sublime images, and don't need a lot of action, humor, or meaty character development to sustain you, this is the movie for you. However, if you prefer sudden scares, zany characters, and rigidly coherent plotlines, you should probably skip this one and wait -- as I will be waiting -- to see how Zombie integrates the newly expanded visual vocabulary displayed in Lords into his next film project. 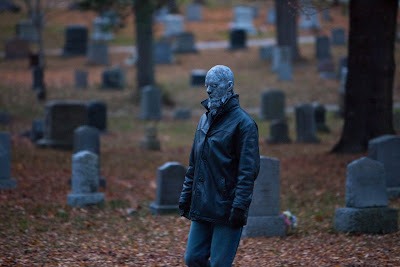 This weirdo sez: "Come take a walk with me into Rob Zombie's strange,
Satanic world -- if you dare!"

--
* That is, 1970's Hollywood. For example, Zombie's 2005 masterpiece The Devil's Rejects contains several homages to Arthur Penn's Bonnie and Clyde (1967); its ending is basically a fusion of the finales of Bonnie and Clyde and Butch Cassidy and the Sundance Kid (1969).
** I appreciate Tarantino but am not a diehard fan; I am in fact somewhat baffled by the extreme praise many filmgoers and critics lavish upon his work. He is surely a superb writer of witty dialogue, and his films are usually great fun to watch, but aesthetically (that is, visually), QT has done almost nothing in his whole filmmaking career that Sergio Leone hadn't already done in the 1960s. (Just watch the Dollars trilogy and you'll see where Tarantino's visual and tonal sensibilities come from.) I state this simply to defend Mr. Zombie from pejorative accusations of being a "derivative" director. Rob Zombie is basically the Quentin Tarantino of horror movies, and I would take his Devil's Rejects or Halloween II (2009) over almost any QT film (except the wonderful, vastly underrated Jackie Brown) any day of the week. But hell, I prefer Robert Rodriguez's films over Tarantino's as well, which I presume is also a minority viewpoint.
Posted by Carter Soles at 3:01 PM