I have sung the praises of Rochester's Dryden Theater before, and will likely continue to do so, as it remains my favorite movie theater in the region. This past weekend I had the extraordinary pleasure of seeing a recently restored print of Alfred Hitchcock's seminal silent film The Lodger, a thriller based loosely upon the unsolved Jack the Ripper case, at the Dryden Theater.  Not only was the print of the film quite beautiful -- I cannot wait until the restored Hitchcock silents referred to as the "Hitchcock 9" are available on home video formats -- but enhancing my experience considerably was the live piano accompaniment of Philip C. Carli.

First, Dr. Carli knowledgeably introduced the film, offering a detailed account of The Lodger's production history, its importance to Hitchcock's body of work, and its status as a "problem" film due to many still-unresolved questions about the extent of the artistic contributions made by scenarist Eliot Stannard and editor Ivor Montagu, Hitchcock's then collaborators. Carli has a natural flair for public address and gave a very engaging talk; while I always appreciate the pre-film introductions given by various Dryden staffers, Carli's talk ranks as one of the best introductory presentations I've yet seen there.

Then, no sooner did Carli finish his delightful verbal introduction of The Lodger than he sat down at the baby grand piano and masterfully accompanied the entire movie as it screened! I have attended just two other silent film screenings with live musicians before, once back in Oregon and once at last year's "Night at the Movies" concert on my campus. I enjoyed both of those prior performances a great deal, yet Carli's performance accompanying The Lodger took this kind of experience to a wholly new, more emotionally impactful level. His musical choices throughout were impeccable; he knew the film inside-out and timed his cues perfectly with the onscreen action. I am not sure if he was improvising, or what score he might have been working from, but in any case I was totally blown away by the performance and plan to see another film accompanied by Carli as soon as I can.*

I strongly recommend that if you live in the Rochester area, you do the same as me and take advantage of this golden resource. Even if you do not typically consider yourself a fan of silent cinema -- and if you don't, believe me, you are missing out on some of the most visually arresting and beautiful films ever shot -- I still strongly suggest you see one accompanied by the talented and dynamic Carli. His musical presence adds so much to the experience of seeing a silent film that I really cannot fully account for it in words; you should simply go to the Dryden and find out for yourself.** 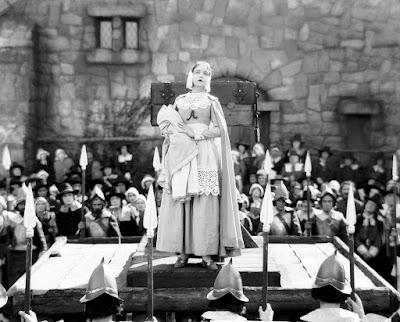 --
* Fortunately for me, I already know when I will next be seeing and hearing Carli: at the Dryden's screening of The Scarlet Letter (1926) on November 26, 2013 at 8:00pm.
** If you have never been to the Dryden before, or if you have only been prior to Spring 2013, you may want to check out this well-produced short video about the renovation of the theater earlier this year.
Posted by Carter Soles at 11:48 AM