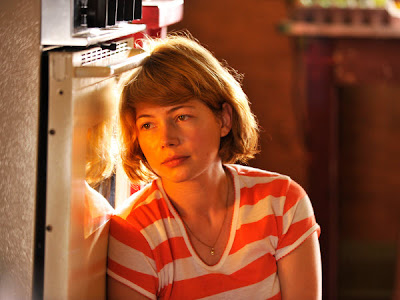 I recently saw Sarah Polley's wonderful Take This Waltz and felt the need to elaborate a few reasons why this is a film not to be missed.

First off, do not be fooled by outward appearances or the frequent generic classification of this Michelle Williams vehicle as a "romantic drama": while romance and relationships are two of the film's central themes, Take This Waltz is far from romantic. Rather, it is an unflinching deconstruction of the illusion of romance, a sobering, warts-and-all look at how people often fail to find happiness, or at least the kind of happiness they imagine or expect.

If that description makes the film sound unappealing, it isn't meant to. The performances in Take This Waltz are uniformly excellent and the direction is bold and sure-footed. Visually, Take This Waltz is an utter treat; Polley's mise-en-scene choices, with respect to both costume and set design, are impeccable, and the camera work, while mostly unobtrusive, is extremely effective at showing off the aforementioned features of the decor as well as highlighting the actors' very effective and nuanced performances. 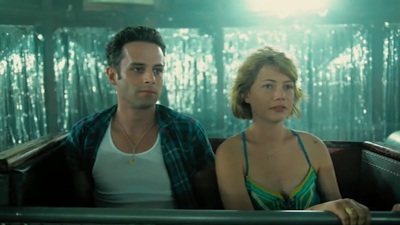 This swooping amusement park ride serves as a visual metaphor for Take This Waltz's theme of circularity and cyclical, repeated behavior.

The film's central motif is circularity, visually represented by repeat visits to a carnival ride* and one other key scene (to which I will return), both meant to suggest the cyclical nature of its protagonist's mood swings and her oscillating relationship choices. That protagonist, Margot (Williams), begins the film trapped in a Platonically loving but sexually dead five-year-old marriage to the affable but passionless Lou (Seth Rogen). I half expected the film to end by vilifying Lou, or at least valorizing Margot's mysterious new neighbor/love interest, Daniel (Luke Kirby), at Lou's expense. But the film instead dares to show both male characters as being human, that is, in equal measure desirable AND flawed -- they just (seem to) represent different relationship paths for the vulnerable, indecisive Margot. And while (SPOILER ALERT) she ultimately chooses Daniel, the film systematically deconstructs that choice in one of its most breathtaking and unexpected visual sequences.

[THE NEXT PARAGRAPH IS A BIG SPOILER]

After Margot leaves Lou to be with Daniel, Polley's camera shows us a mostly empty, sunlight-saturated loft apartment into which Margot and Daniel are moving. In the equivalent to a montage sequence, except with no (evident) cuts and set to Leonard Cohen's "Take This Waltz," the camera circles the couple several times, repeatedly tracing a 360-degree arc around the whole loft, suggesting the passage of time via reveals of new furniture and new situations between the lovers on each lap. The first few laps depict the couple coming together for a kiss, for a dance, for sex in a few varied positions, etc. But finally, on the last lap, Margot and Daniel are seated on the couch, watching television news, with a fan blowing on them, in an echo of similar shots we see of the passionless Margot and Lou earlier in the film. I don't know if the 360-degree camera here is meant as a deliberate homage to the similar single 360-degree shot that climaxes Hitchcock's Vertigo, but it surely evokes that strange moment, the culmination of Scottie Ferguson's twisted romantic fantasy of possessing his lost love Madeleine one more time. Both shots are used to expose the illusory and fleeting nature of romance, and to expose a darker truth: that love may in part be a function of neurosis, obsession, and exploitative need for the fulfillment we seek in others' arms. 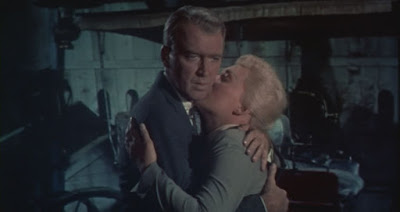 In Vertigo, the camera encircles Scottie as he imagines himself with Judy/"Madeleine" before she "died." Sarah Polley uses a similar technique to deconstruct a budding romance in Take This Waltz.

In any case, the circling camera creates a virtuoso "long take" (with hidden edits) which perfectly expresses Take This Waltz's central idea. The thematic and the visual meet seamlessly here, creating an immensely satisfying, even breathtaking unity of form and meaning that hits home whether or not the viewer has any knowledge of the 1958 Hitchcock film.

As writer/director Polley says in this informative interview,


Different people seem to have fundamentally different experiences of [Take This Waltz]. People feel very passionately that the film validates whatever their own point of view is – on long-term relationships, monogamy, what happens to romance, whether Margot and Lou should have stayed together. I’m happy about that. I feel the film’s point of view is ephemeral. I feel no judgment of Margot for doing what she does, but I’m not sure it’s the right thing.

I agree that the film's point of view is to some extent "ephemeral" and that that is a positive thing. The film is nonjudgmental about its humanly flawed characters, and in this sense Take This Waltz reminds me of the best of Nicole Holofcener's work: a revealing slice-of-life that resists tidy romanticization in order to show us something more sublime and true about human relationships and human nature.** It is also subtly feminist -- see the delightful scene in the public showers at the swimming pool for an example of how to display female nudity without being exploitative or objectifying.

Take This Waltz's tone is not romantic. Rather, it is subtly unnerving, maybe even dark-comic at times. But in refusing, even deliberately exposing and dismantling, the illusory nature of Romance with a capital "R," Take This Waltz offers us something far more valuable: an unflinching look at the "gaps" (as Sarah Silverman's Geraldine puts it near the film's end) that exist in real-life relationships and lives. 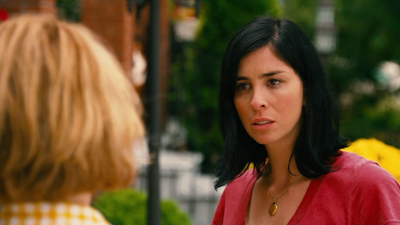 "Life has a gap in it. It just does." Sarah Silverman, in a bravura performance, delivers
Take This Waltz's most poignant line in the penultimate scene of the movie.

--
* A whole separate essay could be written on Polley's use of The Buggles' "Video Killed the Radio Star" as the soundtrack to the amusement park ride sequences. I think the lyrical theme of that song -- the transition between one dying media form and another emerging one -- is extremely relevant to the ideas in Take This Waltz, and that song (much more so than the Leonard Cohen tune which gives the film its title) has been consistently haunting me ever since I saw the movie earlier this week.
** In fact, the themes of this film, and specifically its swimming pool shower scene, remind me a great deal of of Holofcener's Lovely and Amazing (2001), especially the scene in the latter film in which Dermot Mulroney critiques Emily Mortimer's nude body.