It is hard for me to write about films of which I am not a fan. I can do it, and sometimes I have produced good analytical papers by doing so, but here on the blog I mainly post about films toward which I am positively inclined.

This truism partly explains why I have been so slow to complete my promised review of Star Wars Episode II: Attack of the Clones. I want to get that piece out there, but it is more an intellectual goal than a passion project. I want to review a Star Wars prequel to show I'm a good sport and to inoculate myself against accusations of bias against them. But the truth is, I am biased: as a movie fan, I loathe and despise all three prequels. 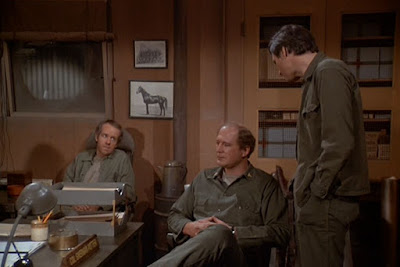 Winchester: "I loathe you, Pierce."
Pierce: "I call your loathe and raise you two despises."

Conversely, I noticed recently that there are certain film-worlds I simply enjoy inhabiting and will take the opportunity to visit them even via relatively mediocre movies, e.g., the Tron universe or G.I. Joe: The Rise of Cobra (2009) or anything involving the Fantastic Four. Then there are other cinematic universes, like that of the X-Men, that I don't find too compelling. I enjoyed X-Men: First Class (2011), for example, but I cannot rally the enthusiasm to make it all the way through Days of Future Past (2014). It's a perfectly well-crafted movie, and if I were really into the X-Men I would probably love it, but I am not invested and no X-Men movie, no matter how good, has much re-watch value for me. Maybe I am just Wolverine-fatigued?

Owen Gleiberman wrote a recent piece that gets to the heart of this issue. Ostensibly about his disappointment with Pirates of the Caribbean 5 and Alien Covenant, the article notes that


Franchises are the basic commercial architecture on which the movie business now rests, so the whole culture — audiences, critics, the industry — has a vested interest in viewing this situation without cynicism.

That is, the way the film industry is structured right now encourages viewers to buy into a whole different kind of movie -- the intertextual franchise entry -- than existed in the recent past. According to Gleiberman, our experience of sequels and franchises has shifted since the blockbuster era began in the 1980s:


One of the reasons the word “franchise” passed from industry talk to a colloquial term is that it sounds strong and powerful. You’re not just seeing a movie, you’re glimpsing a part of something larger. You’re not just watching it, you’re joining it.

This "joining" with something larger can be great fun, and explains my enjoyment of the G.I. Joe films, yet sometimes I just want to see a well-made movie that isn't hyperlinked to a bunch of other stuff. As I said in my review, part of what makes Patty Jenkins' Wonder Woman so refreshing is that, whatever its internal flaws, it mostly feels like its own movie, even if you can tell from its overuse of slo-mo combat sequences that it is part of the "DC Universe" and that Zack Snyder vaguely oversaw its production.

I ultimately advocate for both experiences. It can be fun to immerse oneself in a franchise-universe that you enjoy, and this kind of fandom creates a special relationship to (at least certain) films in the franchise, e.g., my love of Prometheus. Yet as Gleiberman suggests, "it can be healthy to return to the mindset of the ’80s and remind yourself that a sequel is often just a sequel: a movie that has no organic reason for being, even if it pretends otherwise." Agreed. 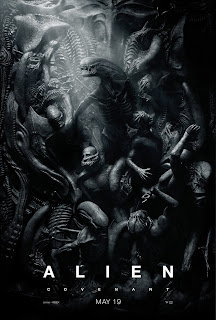 I greatly enjoy hanging out in the Alien universe, and absolutely loved Alien Covenant, but I totally agree with Gleiberman when he says that "the thing that can’t be recaptured, even by director Ridley Scott, is the essence of the original 1979 Alien: the sense of revelation, of seeing a monster that immerses the audience in transcendent horror." I agree. Yet as a committed fan of the Alien franchise, I don't go into Prometheus or Covenant expecting to relive the greatness of the original film. I go in wanting simply to hang out in that world some more.

Still, there are limits and contours to my Alien franchise fandom. For example, I find the abominable Alien Resurrection (1997) all but unwatchable. I re-watch Alien and Prometheus much more often than I do James Cameron's generally excellent Aliens (1986). And I am currently enjoying Ridley Scott's run of Alien prequels quite a bit -- see this EW review for a gloss of what I think of Covenant.

I have written about movie fandom before -- maybe the best thing I came up with (besides the catch phrase "Fuck the Tomatometer") is that "holistic film criticism is always colored by the history, tastes, predilections, hatreds, and fandoms of the individual reviewer." In saying that I am echoing Gamasutra's Katherine Cross, who writes that criticism is "the product of a gut reaction; it is a melange of values, emphasis, and personal judgement. It can never be objective."

To the extent to which that is true, criticism and fandom are somewhat inextricable. Yet it is the critic's job to be as clear as possible about their fandoms and leanings so that the reader can have some kind of barometer to use in evaluating the critic's work.

This means being able to talk about fandom -- a kind of gut-level, euphoric, gushy thing -- in concrete terms. I've been thinking that fandom has a few different levels:

I have this last thing with Lord of the Rings. I love the original J.R.R. Tolkien books so much, and they were so deeply influential upon me at an early age, that for me no film version of those works has ever really come close to the version I have in my mind. I find the Ralph Bakshi Lord of the Rings (1978) watchable, and Peter Jackson's The Fellowship of the Ring (2001) passable, but I guess I will always be swayed by my abiding fandom of those novels. Of course, the Rankin and Bass animated The Hobbit (1977) is an exception to this rule, since it is a brilliant and beautiful work of genius that is utterly enjoyable on its own merits, especially its delightful songs.

This is not to say that Jackson's Rings movies aren't good movies in some more objective sense -- though they do get worse as they go, especially screenplay-wise -- but simply that I will probably never love them the way many fans do. As a critic, I can see their positive qualities (e.g., high production values, great casting and visuals), even though I can also see the concrete reasons (e.g., contrived dialogue, shitty characterizations, numbingly bombastic battle sequences) that make at least the second two entries completely unappealing to me. My loyalty to the books plays a key role in how I respond as a viewer, and I acknowledge this in my criticism, but I also have legitimate critiques of the Lord of the Rings films themselves. I am a fan and a critic.

In "Hollywood Blames Critics for Its Movies Being Unimaginative Pieces of Shit," The Daily Beast's Kevin Fallon observes that


When a film like Get Out or Hidden Figures skyrockets to surprise box office success on the fuel of critics’ raves, it’s a credit to the value of positive reviews. But if a well-reviewed film is a box office bomb, then it’s used to argue that they don’t matter. What’s interesting, though, is how often critics and general audiences’ tastes align.

Indeed. Gleiberman echoes this sentiment in his article on superhero movie fandom, writing that "1) Critics are fans. 2) Fans are critics." As Gleiberman concludes:


Take the all-too-relevant issue of critics and comic-book movies. Do we critics reflexively dislike them? No. Do we sometimes dislike them? Yes. Do fans of comic-book movies agree with us? More often than not, I would say…yes. Four years from now, will people be talking about what a kickass movie Suicide Squad was? Prediction: Not really.

But all of us, critic-fans and fan-critics alike, will continue to passionately debate the films, franchises, and pop cultural loyalties we enjoy, nurture, refuse, and resist. The best thing we can do is to articulate these positions clearly and be as respectful as possible in how we communicate our ideas and passions.