Writing about Ridley Scott's 2015 film The Martian last December, I commented that


despite its coherence and high entertainment value, I did not actually like The Martian as much as I liked Prometheus, another recent sci-fi thriller by director Ridley Scott. I know many folks dislike Prometheus, finding it anywhere from mildly to exceedingly disappointing, but for me it is a key example of a noble failure: a film that is incoherent in many of its particulars but falls short of the mark because it makes a bold attempt to be something truly distinct and thought-provoking. For all its imperfections -- which mainly boil down to a few erratically motivated characters, a derivative and predictable plot, and some confusing ambiguity about how exactly the black oil works -- Prometheus really sticks with me, and its highs -- like the initial foray into the facility and the automated surgery sequence late in the film -- reach much higher than anything in the much tamer The Martian.

Prometheus' artificial man David (Michael Fassbender) is up to something vile.

Having just re-watched Prometheus for my fourth or fifth time, I swear the movie gets better every time I see it. Sure, there are unanswered questions and some character decisions that feel ill-motivated or at least ill-advised. But particularly given its visual, tonal, and thematic debts to 2001: A Space Odyssey (same opening shot, David's similarity to HAL, the idea of humanity making contact with a vastly superior alien species), I find its somewhat distant, "kept at arm's length" tone to suit the material rather well. 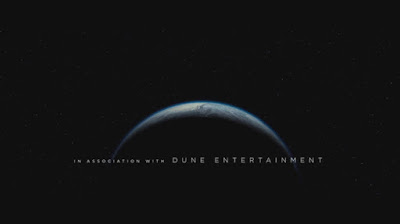 Prometheus' opening shot is quite similar to the first shot of 2001: A Space Odyssey.

From a technical standpoint, Prometheus is an unqualified success. The design is gorgeous, to the point where much of that slow-paced exploration seems designed solely to let the filmmakers show off their accomplishments and their imagination. It’s the first Alien franchise movie to imply that the technology of its future can be beautiful and artistic, not merely worn and weary. And it’s the first in the franchise to work at making humans feel tiny to the point of cosmic insignificance, rather than merely physically fragile.

She concludes that "Until that frantic last act, Prometheus is essentially an abstract remake of Alien for contemplative grown-ups." Indeed, despite some minor differences Prometheus mainly copies Alien's plot, reskinning those familiar structures with awe-inducing visuals and a contemplative, even spiritual tone. As A.O. Scott writes of Prometheus' first half,


the shudders of sublimity only grow more intense as Mr. Scott elegantly lays out a series of overlapping conceits. You might also call them science-fiction clichés, but the amazing thing is that, at least for a while, they don’t feel that way. The visual scheme is sufficiently captivating, and most of the performances are subtle enough that whatever skepticism you may arrive with quickly turns into happy disorientation. The 3-D is unusually graceful — your gaze is absorbed rather than assaulted — and you are pulled into a world of lovely and disconcerting strangeness with plenty of time to puzzle over the behavior of its inhabitants.

Prometheus takes its tonal cues from Alien and, just as importantly, the aforementioned 2001. As Scott observes, in the end "Prometheus kind of spoils itself with twists and reversals that pull the movie away from its lofty, mind-blowing potential." By the third act, Prometheus sacrifices its lofty, 2001-like thematic aspirations for plot-driven, more Alien-like twists and scares. 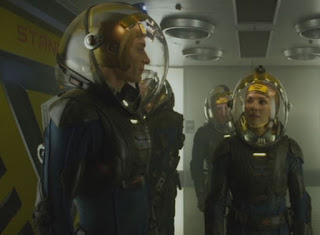 Yet despite its grander ambitions, Prometheus falls well short of its 1979 counterpart. As Robinson writes, the prequel fails to adequately develop and motivate its non-Shaw, non-David cast members: "for much of the film, the mission rather than the people is the star, which makes it hard to connect emotionally when things fall apart for some of those people." I agree with this. Charlize Theron's Vickers works but is distant and hard to read. (Fassbender's David is also enigmatic and hard to read, but that is as it should be -- he is both an artificial man and duplicitous. Plus Fassbender is so great and is given sufficient screen time in which to fully develop such nuances. Theron gets jack -- maybe only four or five substantive scenes?)

Truthfully, all the Prometheus scientists and crew are under-developed, even Captain Janek, played by extraordinary screen presence and fine actor Idris Elba.* By comparison, the original Alien does an amazing job fleshing out each and every crew member, making their relationships and dialogue feel natural.

Plus, in Alien much of the tension springs from knowing (or not knowing) who exactly is in charge of the vessel Nostromo at any given time. Dallas is in charge until he leaves the ship, then Ripley is supposed to be in charge yet Ash overrides her when he breaks quarantine procedures to allow Kane back on board. Thus, before the alien even shows up, there is conflict, a power struggle. In Prometheus, there is verbal talk about who outranks who -- Peter Weyland's hologram says Dr. Shaw is in charge, then Vickers firmly asserts otherwise -- yet nothing concrete comes of this. Vickers never really challenges Shaw and Holloway nor forbids them from doing anything they want. The one thing she explicitly forbids -- using the surgical pod -- Shaw does anyway.

To be fair, Alien is a remarkable achievement it would be difficult for practically any film to match or replicate. Yet it is Prometheus' curse to forever be compared to its superior predecessor, for obvious reasons.

However, any movie that, like Prometheus, successfully combines the plot of Alien with the tone of 2001 is going to score major points with me, since those are two of my very favorite movies.


Many critics and Alien franchise fans have responded quite negatively to Prometheus, finding its plot ridden with holes and its characterizations flimsy. Forbes' David DiSalvo writes that "the film’s ultimate failure is that there aren’t any real characters to invest in." Ouch! I wouldn't go that far, but I probably represent a minority view.**

In any case, this guy definitely wins the "biggest dipshit in the movie" award.

DiSalvo correctly notes that director Scott is a "gifted world-builder and an excellent shooter" but adds that "the success of his films has always hinged on the quality of his screenwriters." So true! Many folks including Meredith Woerner and J.F. Sargent have penned breakdowns of what controversial, no-ending-having screenwriter Damon Lindelof specifically brought to the project. Lindelof was brought on board to revise an earlier script by Jon Spaihts, and whatever brilliance or flaws the earlier draft may have possessed, we know the final Lindelof screenplay leaves a few strands dangling -- most notably, any hint of what actually motivates the Engineers. Indeed, DiSalvo specifically faults the writing for the film's failings: "in the case of Prometheus, what’s responsible for the vacant barbarism of the aliens is merely the limited imaginations of their authors."

I agree that Prometheus' writing is inconsistent and sometimes illogical from story structure and character motivation standpoints.† For example, as this piece points out in item number five, Holloway's helmet removal moment seems out of character for a scientist, plus it lowers the stakes for the whole "deadly planet" setup. And speaking of the strangely crackpottish Holloway, his choice to get drunk mid-movie, while understandable -- he's suffered a major disappointment, he thinks all the Engineers are dead -- is nevertheless odd. As Woerner points out, in the unfilmed Spaihts screenplay Holloway "doesn't pout and turn into a giant drunk baby." 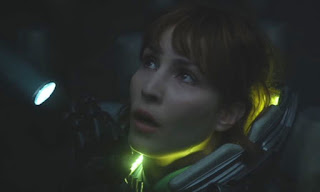 To me, however, both Elizabeth Shaw (Noomi Rapace) and David (Michael Fassbender) are compelling, fully developed characters, which is fortunate since they are the two main drivers of Prometheus' narrative. Shaw and David both wish to make contact with the Engineers, but for very different reasons. Shaw sees the Engineers as creator-gods and wants them to tell her about the origins and meaning of human existence. David starts the film seeking the Engineers mainly on his master's behalf, but by the end it seems that David's curiosity about and connection to the Engineer pilot, and his decision to seek the Engineer homeworld with Shaw, is wholly his own.


What I'm saying is that whatever flaws Prometheus possesses, they are not outright deal-breakers. I like this movie very much. I enjoyed it the first time I saw it, and my appreciation for and enjoyment of it grows with each revisit.

To conclude, as J.F. Sargent opines, "as much as Prometheus sucked (for some people), it’s also pretty clear that the ghost of greatness is lingering just beneath the surface." For me, that greatness is just close enough to the surface to shine through clearly and palpably. I highly recommend Prometheus.

Captain Janek sez: "Come on, guys! We non-white men have got to sacrifice ourselves for the white woman and the Aryan-looking robot!"


--
* Idris Elba should definitely be the next (post-Daniel Craig) James Bond. Please, cinema gods, let that happen.
** I have, in similar fashion, defended the notorious "flop" blockbuster John Carter (2012), stating that it "will age well, and will be regarded more highly once the hubbub over its big budget and small theatrical returns have died down." I would still call John Carter a good movie but it hasn't been a heavy re-watcher for me: I've only seen it once since I saw it in the theater. By contrast, I have returned to the (much better) Prometheus several times, with increased appreciation for its merits each time.
† UPDATE 5/20/2016: Check out Film Crit Hulk's sharp rundown of post-Spaihts screenwriter Damon Lindelof's specific contributions to what Prometheus became.
Posted by Carter Soles at 8:43 AM