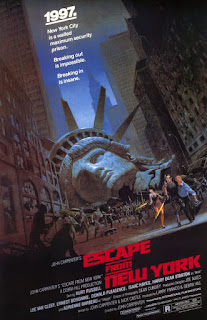 John Carpenter's Escape From New York is one of the most tonally sophisticated, visually iconic, and outright enjoyable dystopian action movies of the 1980s.

Escape From New York lies at the heart of John Carpenter's amazing directorial hot streak stretching from 1976's Assault on Precinct 13 to 1986's Big Trouble in Little China or maybe even 1988's They Live. By general consensus, Carpenter's weakest film of this remarkably fertile period is Escape's immediate predecessor, The Fog (1980) -- a film I personally love and robustly defend. In any case, Escape From New York is a standout Carpenter film from a period when "dark dystopian action film" was a prevalent, competitive genre.

Carpenter has a genius for working within the constraints of a low budget -- in Escape's case, a supposed $6 million. I've written before about how much I love low-budget cinema. I like to see what inventive filmmakers can do on a shoestring. Escape from New York deploys many low-budget cheats, such using radar screen images and atmospheric cockpit footage to help "sell" its model work in the Gulf Fire landing sequence. Yet each time I watch Escape I am reminded of how evocative and rich its film-world feels even though you can "see through" many of the special effects. The low-budget feel of the film perfectly matches and conveys the rag-tag nature of the near-future society it depicts.

Keith Phipps writes that "John Carpenter's Escape From New York took Taxi Driver's urban hellscape and projected it onto a cartoonishly savage future." I concur: Escape From New York haunts me in lasting ways, with its dirty urban setting and grim, moody tone. It also entertains me with its cartoony action-movie touches, like the lamps on the hood of the Duke's car and its rather quotable dialogue.

Yet Escape's cartoonishness does not detract from its darker elements or its lived-in mise-en-scene. As Phipps puts it, Carpenter's dystopian action masterpiece "may be his most visionary film: Escape allowed him to build a future out of scraps from the past." It is indeed very postmodern in feel, with a bleak, existential edge that few '80s action movies achieve with this much style and meaning.

As Brian Eggert points out, Escape from New York


comments on how the New York of 1981 has isolated itself to such an extreme that walls, both metaphoric or literal, enclose its inhabitants within the crime-ridden sprawl, itself a symbol for all of America. Carpenter explores a world in which the American Dream has failed, where the increasing crime rates never stopped. In response, America becomes a fascist state and transforms New York into a penal colony. Carpenter's unique dystopian future, set in 1997, exists on the verge of an apocalypse. And though the setting has been enclosed inside of New York Prison's walls, it resembles many post-apocalyptic worlds to follow in cinema.

As a feminist I must mention Escape from New York's most disturbing incidental scene. Using a tracking device to trace the missing President, Snake Plissken descends into the basement of the Fox Theatre. He passes by an area in which three men are manhandling a seemingly inert or unconscious woman. We watch from Snake's point of view as one of the men tears the woman's shirt off, exposing her breasts. We cut to a close-up of Snake, who just walks on by, consulting his scanner. We see and hear nothing of what occurs in the area after Snake leaves (the whole brief scene is eerily quiet and wordless) but imminent rape is clearly implied.

This "incidental rape" scene reminds me of The Road Warrior's very similar scene and of Escape 2000's generally exploitative approach to sexuality. The scene is included to make the film-world seem more harsh and to make Snake look more dark-edged and cruel. He's an antihero; he does nothing to stop the sexual assault. But what, we might ask, of the victim? The film never says.

I can offer no excuse for this. This scene disturbs me. Maybe that's the point -- that it should. But as Karen Valby points out, sexual assault is often misused in television and film as an "easy" go-to device to raise the narrative stakes. This particular scene feels exploitative because we are not encouraged to empathize with the victim -- she is kept silent, anonymous, at a distance. The focus is swiftly returned to Snake, our white male protagonist. The woman's suffering exists to make Snake look more badass.

Adrienne Barbeau, who plays a more compelling and central role as Stevie Wayne in The Fog, is ill-used as Maggie in Escape. Maggie is a one-dimensional, eroticized object whose main role is to be looked at and discussed by men, to be the bearer of the masculine gaze.** The male characters don't even call her by name, they just call her Brain's "squeeze." Her main motivation is to follow Brain around and protect him.

Indeed, most of Carpenter's work tends to be male-centered. This masculine focus, while partially explicable via the writer-director's ties to the action genre, may also explain why his best horror film, The Thing, is so goddamn good. It's Carpenter perfectly in his element, with nary a woman in sight. It is also a Howard Hawks remake. Carpenter is quite Hawksian -- for example, his Assault on Precinct 13 (1976) is a reworking of and homage to Hawks' classic western Rio Bravo (1959).

However, despite Carpenter's indebtedness to Hawks, and despite the presence of spaghetti western star Lee Van Cleef in the second lead, Escape from New York is not a western. Carpenter infuses western moods and elements and plot structures into Escape but its setting and iconography have more in common with Blade Runner, a science fictional film noir, than they do any western.

Then there's the fuckin' music, composed and performed by Carpenter (with Alan Howarth). Escape from New York's soundtrack rocks, especially its totally badass opening theme.*** Some misguided souls consider keyboard-driven music, especially '80s-era synth-driven music, to be inherently silly or cheesy. What a sad case of affairs for such unfortunates.

For those who either grew up with synth-pop music or have otherwise developed an appreciation for it, Carpenter's early soundtracks, especially those for Halloween and Escape from New York, are absolutely top-notch.

In the end, the appeal of Escape from New York largely hinges on Kurt Russell's brilliant, spot-on portrayal of Snake Plissken. Russell is so goddamn cool as Snake Plissken that I can't really describe it  -- just watch the damn movie.

Or if you prefer campier fare, see one of the other Carpenter-Russell team-ups. Russell's badassery as Plissken is most of what sustains Carpenter's somewhat lesser, not too original, but still enjoyable follow-up Escape from L.A. (1996) -- a film which has its defenders. Hell, despite its myriad pleasures -- and they are many -- Russell is the funniest and most entertaining thing in Big Trouble in Little China (1986) too. His Jack Burton is one of the great American screen protagonists and is the main thing that makes that crazy-ass movie work.

As for Snake Plissken and the fine first movie built around him, if you enjoy male-centered action-movie fun set in a bleak, grungy, existential future -- 1997 as imagined by 1982 -- then check out the artfully constructed, action-packed Escape from New York.

--
* Like most young people, I had rather catholic tastes as an eighth grader, which may explain my appreciation for 1980s action cinema (though it cannot fully explain my ongoing love for Oz-sploitation classic Turkey Shoot). I should also mention Walter Hill's The Warriors (1979), a film that properly belongs to this group but that I did not see until the mid-2000's. I additionally recommend Hill's under-seen Streets of Fire (1984).
** I am using terminology introduced by feminist film critic Laura Mulvey in her famous, accurate essay "Visual Pleasure and Narrative Cinema," originally published in Screen 16.3 (Autumn 1975) pp. 6-18. Mulvey argues that the default gaze of Hollywood cinema, emerging as it does from a patriarchal society and sexist film industry, is gendered masculine. That is, our cinema is sexist, depicting masculine things (like male characters) as active drivers-forward of narrative and feminine things (like women's bodies) as passive objects best suited for erotic display.
*** You simply must check out John Carpenter's recent live studio recording of the Escape from New York theme song, plus its cool video: