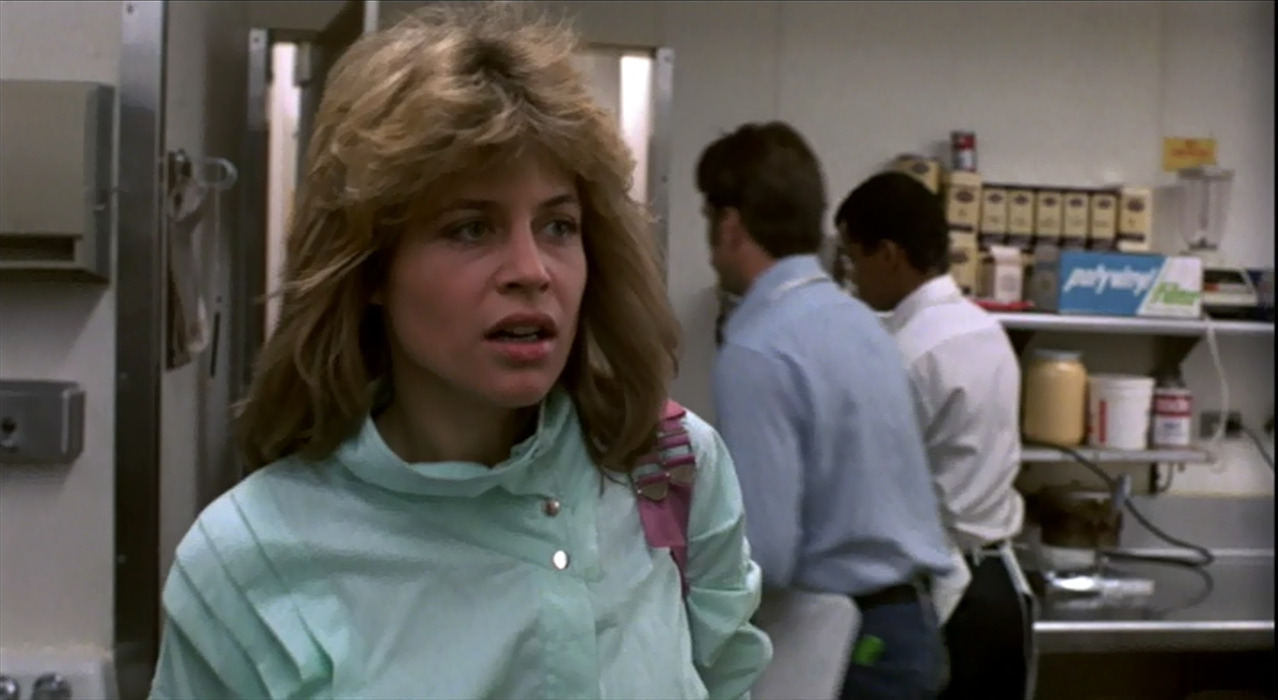 The Terminator (1984) is better than its sequel, largely (but not entirely)
due to the role played by this lady right here.

Okay, this time my use of the adjective "stupid" in the post title is not fully warranted: Terminator 2's ass is not completely stupid. In fact, Terminator 2: Judgment Day (1991) is actually a good movie that I enjoy. I admit outright that my main reason for using that post title is to create a sense of uniformity with my last post in this series.

However, I am here to tell you that the original 1984 film, The Terminator, is definitely much better than its fun but problematic sequel. As enjoyable as that sequel is, it is not nearly as tight on the filmmaking front as its predecessor, nor is it the pro-feminist work that many uninformed persons believe it to be. In fact, the first Terminator is both a better film and a more feminist film than Terminator 2.*

Let's start with that main ideological issue: sexism. In The Terminator, Sarah Connor is an average twenty-something woman living in L.A., who happens to get targeted by an invincible killer cyborg from the future. While she seems frightened and somewhat in shock when she first realizes she is being stalked, she makes several smart moves -- staying in public places and calling the cops ASAP. Then, once she learns about the whole time-travel thing from Reese, she adapts quickly to her new circumstances and responds quite well to Reese's elementary lessons in survival and weapons training. She does make one crucial error -- calling her mother to tell her where she is -- but even this blunder can be explained by her naivete about the full capabilities of the Terminator, and needn't be read as some kind of feminine weakness or hysteria. In fact, the Sarah Connor of The Terminator practically never gets hysterical, nor, ultimately, does she need to be saved by a man, except right at the outset. She shows resilience and depth throughout, and by the end, after Reese dies, Sarah manages to save herself and to destroy the Terminator all on her own. 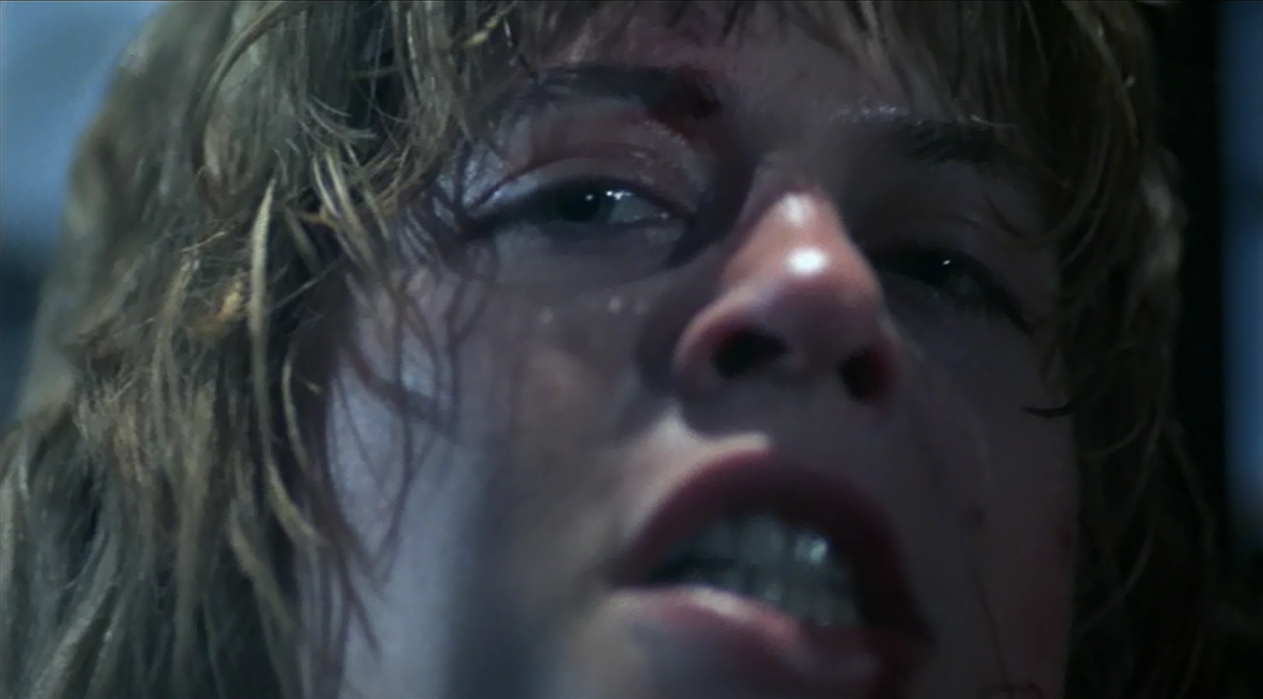 By contrast, in Terminator 2, despite (or perhaps to chauvinistically compensate for) her badass muscles and paramilitary training, Sarah Connor gets sold out; she loses agency and power relative to the first film. While the early scene in which the mental institution staffer is shown erotically licking her face against her will is gratuitous and humiliating for her character  -- I have never understood the necessity of that moment -- the main way in which Connor's agency is undermined is via the ascendancy of her adolescent son. As John Connor slowly comes of age in this film -- under the tutelage of the gendered-male Terminator, NOT Sarah herself, mind you -- he also becomes her surrogate parent, bossing her around and preventing her, with the help of his new cybernetic daddy/buddy, from making the horrible errors she plans to make by assassinating Dyson. And the film wants us to sympathize with young John in this, showing Sarah's actions to be badly thought out, rash, histrionic, even outright crazy. This character who supposedly has the mental fortitude to withstand the first Terminator attack, the loss of Reese, her own subsequent institutionalization, and the appearance of yet another (and more powerful) Terminator in her time, suddenly loses it, requiring her tweener son to not only rescue her but to counsel -- no, order -- her back into a state of relative mental stability. Which she never quite regains, because she spends the whole last third of this movie taking orders from this kid, who SHE should in fact be training! 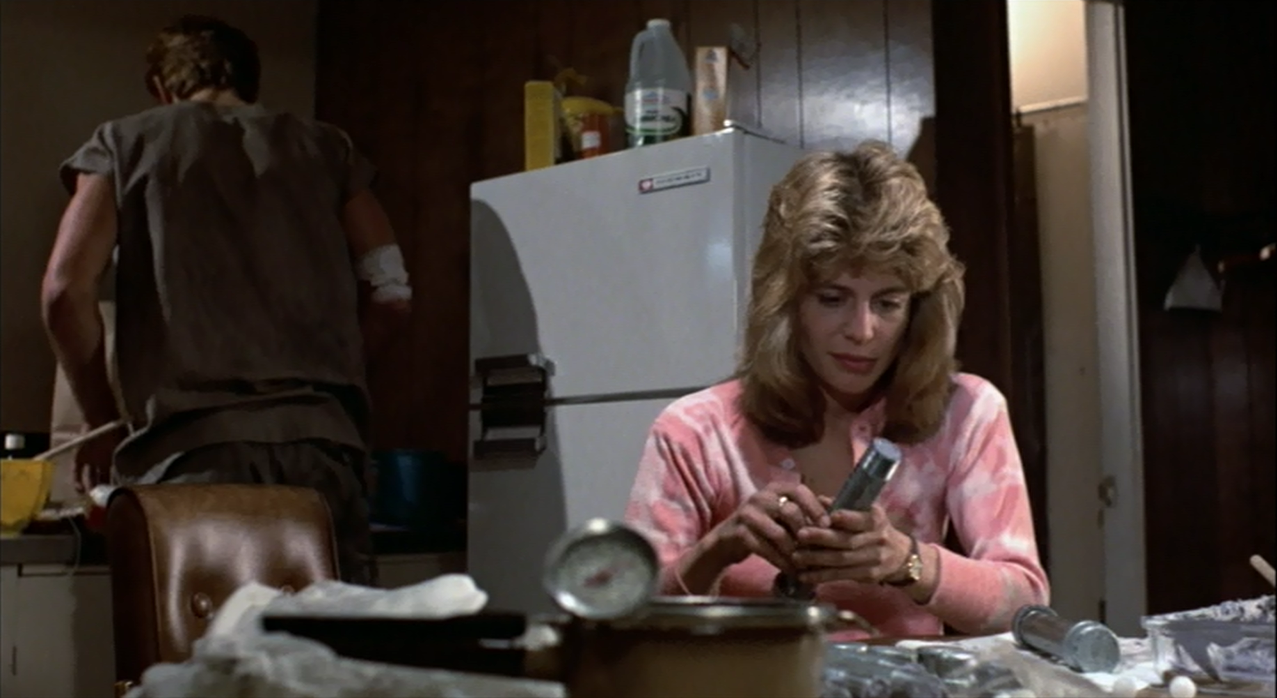 This is a progressive, well-rounded depiction of a heroic female character.

Now I totally get that one should not be too nitpicky about blockbuster action movies making too much sense -- otherwise, NONE of them would be any fun. Yet I do ask for a certain basic level of adherence to THEIR OWN internal rules, and on these grounds I find the inconsistencies created by second Terminator film to be distractingly bad for the franchise.** For example, see item #3 on this list, in which the author notes that the main rule for time travel established by the first Terminator film -- "The time machine can't transport non-living matter" -- is flagrantly broken by the second one:


Now, technically, the first Terminator is a machine with living tissue layered over its endoskeleton, so it gets a pass, we guess. Enter the T-1000, the second film's liquid metal Terminator that can take nearly any shape and recover from nearly any wound. Oh, and it can turn its arm into a knife.

The problem is, this Terminator is composed entirely of liquid metal. No living tissue, no flesh, just 100% mimetic-poly alloy (thank you, James Cameron). That means, according to the rules clearly established in the first movie, it cannot travel back in time.

Indeed. This has always bothered me, since no such flagrant problems exist in the first, tightly scripted and well-thought-out film.

Sure, the first Terminator movie does create a kind of temporal paradox by revealing (SPOILER!) that the time-traveling Kyle Reese is the unborn John Connor's father, which means that none of the future events of the film would have happened at all if he hadn't come back in time in the first place -- but this I write off as one of the inevitable results of ANY time-travel scenario. Paradoxes arise and exist. I don't have a problem with this twist because it doesn't fundamentally undermine the premises set up by the film. It just fucks with our heads a bit because time-travel scenarios are ALWAYS illogical and paradoxical. 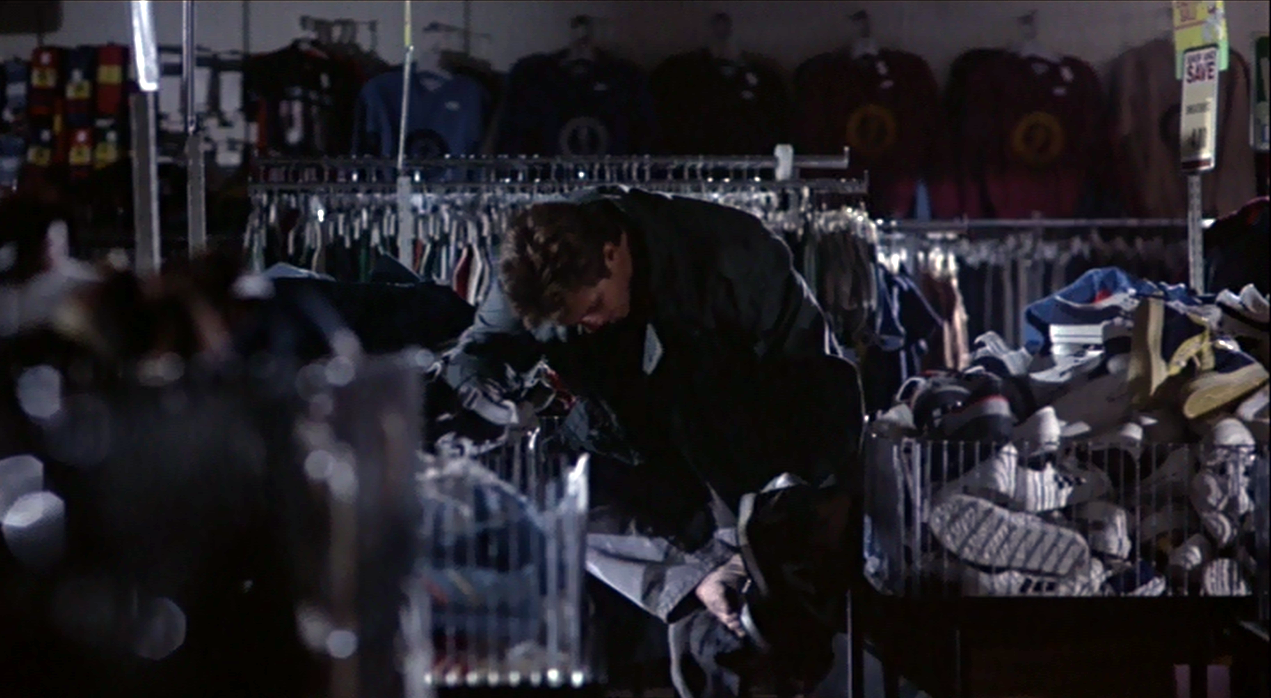 Reese finds shoes --  a great moment from a superbly shot and edited chase sequence
early in the first Terminator film.

And who cares about the occasional temporal paradox when the action is this good? With only one major exception I can think of -- the truck-and-motorcycle chase along the L.A. River in T2 -- I argue that the action sequences in the first Terminator are uniformly better than those of its sequel. Sure, those exciting bits in the sequel are more over-the-top and quite pleasurable, but I urge you to take a careful look at the opening cops-chase-Reese sequence in The Terminator, or the final showdown of the first movie from the point where Reese and Sarah leave the hotel room and end up at the factory. The editing and cinematography (not to mention the great soundtrack) are all so effective in these sequences, so pulse-poundingly exciting and suspenseful, that they generate a cumulative intensity that cannot be matched by Judgment Day, good as it is.

The L.A. River chase = the best action sequence in T2, and the only one
that matches the intensity of those seen in The Terminator.

Lastly, one of the biggest flaws in T2 is that there's no Michael Biehn -- Reese is one of the most badass parts of the first movie. Instead, we get a somewhat annoying 10-year-old kid. Cracked.com calls the young John Connor (Edward Furlong) the flaw that nearly ruins Terminator 2, lambasting the film for "giving us a 10 year old John Connor who, upon repeated viewing, is so obnoxious that you spend most of the movie wanting to see him shot in the face, fate of humanity be damned." Taken together with my feminist critique about how grating it is to have such an immature kid bossing his mom Sarah around, I am inclined to agree with this point. I don't hate young John Connor per se, but he's no Kyle Reese. 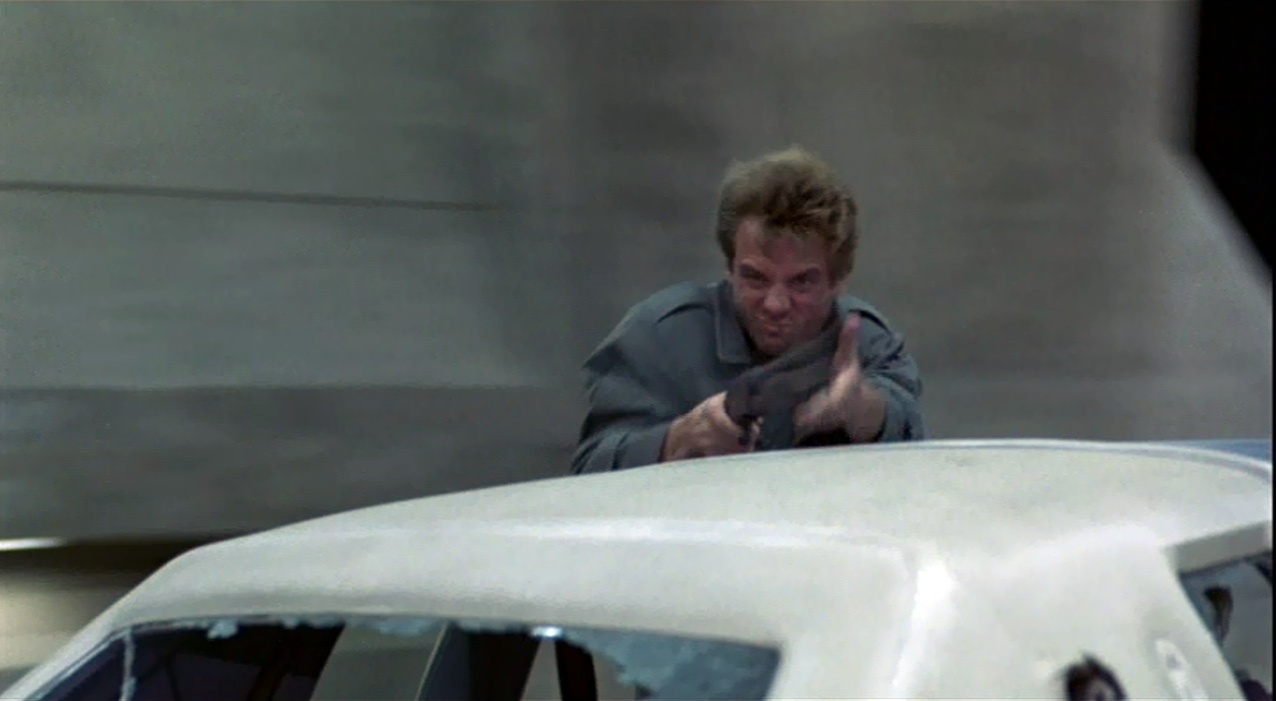 To conclude, while I am not here to disabuse anyone of their love for T2 -- let me reiterate that on the whole, I enjoy the film -- I would urge all my readers to take another serious look at The Terminator, and see if you can tap into the crazy intensity, tight direction, and more satisfying character arc for Sarah Connor that leads me to champion this film over its (perhaps undeservedly) more popular follow-up.

T2's Sarah Connor sez: "Get me out of this hysterical role in this sexist movie -- NOW!"


UPDATE 5/26/2015: This guy is even tougher on T2 than I am; he accurately claims in item #2 on this list that the actions of the T-1000 at the end of the sequel are "baffling," concluding simply that "robots are pretty dumb sometimes."

--
* This same logic applies to the first two Alien films: while falsely believed to be as good as if not better than Alien (1979), and also supposedly more feminist, James Cameron's Aliens (1986) is in fact no better than Ridley Scott's Alien from technical standpoint and is actually more sexist than its 1979 predecessor. But that is a subject to return to later.
** As one of the guys in this funny video puts it, "James Cameron is like: 'Shut up and watch this badass thing I made but don't you dare fuckin' think about it!'"
Posted by Carter Soles at 9:06 AM