I saw Disney's live-action version of The Jungle Book directed by Jon Favreau, and overall I was visually impressed, if disappointed as a political progressive and a feminist.

To start with the good stuff, though, the film's digital effects are astounding, its script and direction quite capable, and while there were no real surprises -- the film telegraphs every development quite clearly -- I had a good time watching the film in the theater.

As others have noted, The Jungle Book's single greatest achievement is its computer generated images (CGI) of its various animal characters. I have written and presented on the topic of CGI animals in film, and just last year had a discussion with several film scholars about how very few digital animal performances in film manage to cross the "uncanny valley." But The Jungle Book's creatures look quite believable, setting a new high bar for realistic-looking CGI animals in major studio releases.

As Rajeev Balasubramanyam insightfully notes, the new version attempts to deracinate and deterritorialize its Rudyard Kipling source material, taking a stalwart of British imperialist literature and turning it into a kind of bland, globalized, Indiana Jones-esque theme park ride.* As Balasubramanyam writes:


While the CGI-rendered jungle looks very real, it does not feel much like India, or indeed any single place. Favreau’s jungle is more of a global one, resembling a composite of familiar scenes from The Lion King then Avatar, and then perhaps Arizona, or Rajasthan, or the Sahara. Anything that smacks of cultural specificity has been eliminated

I agree with Balasubramanyam's reading and would add that the film makes clear its deterritorialized position from the very start. The opening Disney logo comes up, including that aerial shot that swoops backward over the ramparts of the iconic Disney castle as "When You Wish Upon a Star" plays. Then it continues its track back under an archway of jungle flora to reveal the words "The Jungle Book" etched in stone, and finally pans right across a waterfall to establish the film's "jungle" setting. That is, there is no fade to black or cut of any kind between the "magic kingdom" corporate logo and The Jungle Book's establishing shot. It is all one continuous take. The movie literally takes place inside a Disney theme park. It is neither a real jungle nor even a strictly real place, it is Disneyland or Walt Disney World. 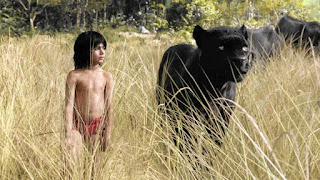 It is also a completely homosocial, males-only environment. Before seeing The Jungle Book, I braced myself for lots of racism and imperialism, and that stuff is surely present in the film. For example, the main "good" animals, such as Baloo (Bill Murray) and Bagheera (Ben Kingsley), are all white-sounding and/or British, while the film's chief villain, Shere Khan, is one of the few creatures voiced by a black (albeit British) actor, Idris Elba.

Yet what really bowls me over is the film's sexism. There are only two speaking female roles in The Jungle Book: Mowgli's angelic, fiercely loyal wolf mother Raksha (Lupita Nyong'o) and the vile sexual seductress of a snake, Kaa (Scarlett Johansson). That's it. Devoted, perfect mother or slithering, murdering whore. Yay, Disney! 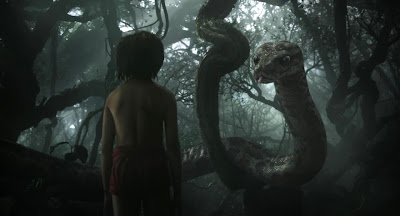 In addition -- and perhaps this is somewhat unavoidable when making a film of this kind -- I feel that there are several shots of Mowgli (Neel Sethi) running around and posing in The Jungle Book that folks like Jared Fogle would jerk off to. And if the cinematography doesn't already encourage thoughts of pedophilia and sexual predation, Mowgli's scene with Kaa makes the sexual stakes of his adventures clear. This reboot of The Jungle Book franchise features no human female love interest for Mowgli -- that is surely being saved for the sequel -- but Kaa's erotically charged scene reminds us that sexual women are dangerous beings who threaten to eat us alive. Better to remain in a state of immature arrested development, safely ensconced with our male friends. Thank God Baloo the bear shows up just in time to pulverize that slutty snake! (What is this, one of those fucked-up animated sequences from The Wall?)

Anyway, all in all, I recommend that you catch The Jungle Book in a theater if you like state of the art special effects or want to see a sexist, racist, but superficially enjoyable and extremely well-made movie about a boy's adventures with talking animals in a jungle environment that feels more like the Indiana Jones and the Temple of Doom mining cart chase than it does any real-world locale.

For that opening long take in which we are drawn into a virtual Disney theme park is the most meaningful shot in this entire movie. That first shot carries The Jungle Book's primary message: that we will all be watching Disney products for the rest of our lives, and after we die, our descendants will do the same. Like Mowgli, none of us is ever going to grow up and none of us is ever getting out of the jungle. We live in Disney's world now. Our great-grandchildren will pay sixty five space credits to see 4D versions of Star Wars Episode Twenty Six and Captain America: Infinity Civil Galactic Guardians of the Galaxy Meets Valhalla and Jungle Book 9: Mowgli Carter of Mars. 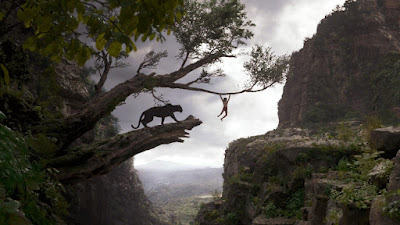 That's us, dangling from the limb. Disney is going to eat us.

UPDATE 5/2/2016: It took a day for this to sink in, bit I have realized another annoyingly retrograde aspect of The Jungle Book's shitty sexism: the film uses the word "man" to refer to humankind. Mowgli is a "man-cub," the village is the "man-village," etc. I assume it's the same phrasing used in the original Kipling texts, but that was 1894, this is fucking 2016 for Christ's sake. Even Star Trek: The Next Generation made the change from the original series' iconic yet sexist opening phrase "To boldly go where no man has gone before" to "To boldly go where no one has gone before" way back in 1987. Get with it, people!

--
* For a deeper dive into the differences between Kipling's original stories, the 1967 animated version, and this latest one, check out this insightful post.
Posted by Carter Soles at 5:21 PM