My Thoughts on James Bond


With the new Daniel Craig "James Bond" film Spectre coming out later this fall, it seemed an appropriate time to share my thoughts about the James Bond film franchise. I have confessed before that Bond movies run deep in my cinephile DNA -- Thunderball (1965), the first Bond film I ever saw, was one of two films I screened at my 12th birthday party in 1983. I have been a devotee of the series from that point until the inception of the Daniel Craig era in 2006.

I don't wish impugn the quality of the recent Bond films and I actually think Daniel Craig is a superb choice for the lead role. But the franchise fundamentally changed in 2006, undergoing a reboot and a drastic shift in tone, so to my mind it is more accurate to refer to Casino Royale, Quantum of Solace (2008), Skyfall (2012), and the forthcoming Spectre as "James Bond" films (in quotation marks) so as to differentiate them from their more lighthearted and aesthetically distinct predecessors. I enjoy some of the new films okay, especially Skyfall, which brought some much-needed levity back to the franchise, but I am most truly devoted to the series' original run from Dr. No through the end of the Pierce Brosnan era.

Despite maintaining the same general lineup of recurring characters and even retaining Judi Dench (a holdover from the Brosnan films) as M, Casino Royale (2006) represents a complete reboot of the James Bond film franchise. Casino Royale tells (for the first time) part of Bond's origin story, adopting a different, more serious tone than any previous 007 film and even breaking with certain formal traditions that defined the series since the 1960s (more on the specifics of that in a minute).


a narrative form that presents [. . .] episodes with a defined set of recurring characters. Each [. . .] episode is basically self-contained. [The] narrative of a series does not consistently continue from one [installment] to the next.


expects us to make specific and substantial narrative connections between one episode and the next. In the series, the link between each [installment] is rather vague. In the serial, the connection is fundamental to its narrative pleasures.*

For forty years, from 1962 (Dr. No) until 2002 (Die Another Day), the James Bond movie franchise operated as a series. There were characters (Bond, M, Q, Moneypenny, Felix Leiter, Blofeld, Jaws, Quarrel, Valentin Zukovsky) and selected catch phrases and jokes ("Shaken, not stirred") that recurred, but each film stood alone with practically no acknowledgement of any events from other installments.**

In 2008 that all changed, when Quantum of Solace picked up right where Casino Royale left off, acknowledging Bond's love (!) relationship with Vesper Lynd (Eva Green) from the first movie of the rebooted franchise. At that point, the Bond movies became serialized, telling an ongoing story of Bond's adventures assumed to be in chronological order and with events from one film impacting what took place in the next. (See, for example, what happens to M and MI6 at the end of Skyfall.)

In addition to the adoption of the serial format and a generally grittier tone, the Daniel Craig reboots also did away with the traditional sequence of content that had opened all Bond films since From Russia with Love in 1963. (These conventions had not yet been solidified in Dr. No, the first Bond film, which has no pre-credits sequence.) 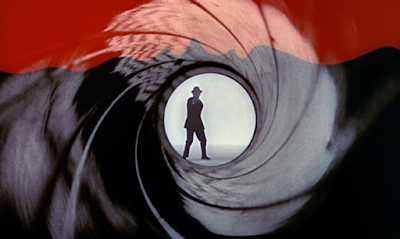 In the original films from From Russia with Love onward, the sequence goes:

1. Circular "gun barrel" motif looking at a nonspecific location. Bond walks in from the right side of frame as the gun barrel "eye" follows him and the James Bond main theme plays. He suddenly turns and shoots the viewer. As blood drips down the screen, filling it, the circular gun barrel "eye" plunges toward the bottom of the frame, then cuts (From Russia with Love, Goldfinger) or irises (all subsequent films) into . . .
2. An opening vignette that sometimes does, sometimes doesn't bear any direct relationship to the main story of the film.***
3. Opening credits sequence, usually designed by Maurice Binder and set to a unique title song.†

With Casino Royale the sequence instead becomes:

1. Opening vignette -- in black and white no less! And including a flashback to an earlier fight!
2. The opening vignette ends in the bathroom location of the flashback. From within that specific location, Bond turns to face the camera and shoots the viewer with the "gun barrel" effect superimposed over the edges of the frame. [No James Bond theme is played.] Dripping blood fills the frame, becoming the red background for the . . .
3. Opening credits sequence accompanied by a unique title song.

It's a clever reworking and reordering of some of the old iconography, but that's exactly my point: it's a reworking. These changes to the order of and transitions between the traditional components clearly signal that Casino Royale is breaking with its past, modifying the opening sequence enough that the difference is noticeable, especially to a longtime fan of the franchise. I do not judge this, I merely note it and offer it as evidence supporting my claim that the pre-Casino Royale Bond films are quite different from the Daniel Craig ones. This distinction matters to me and is the reason why, in my overview of the James Bond films that will constitute a two-part sequel to this post, I will discuss and evaluate only the pre-Craig Bonds.

Stay tuned for the next installment! 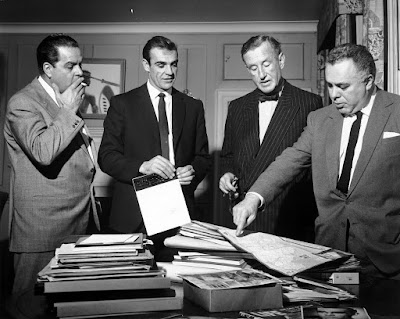 "Yes, Ian, that's right, THIS is the spot at which Sean gets to slap around the ineffectual darky henchman. . . "

UPDATE 6/11/2016: See also Owen Gleiberman's recent rumination on where the Bond franchise might head after the departure of Daniel Craig.

--
* Jeremy G. Butler, Television: Critical Methods and Applications (Third Edition) (Routledge, 2006) pp. 34 and 40.
** I can think of exactly two exceptions to this: (1) In On Her Majesty's Secret Service, as Bond goes through his desk early in the film we see mementos from a few of his previous missions, and (2) In the opening moments of the For Your Eyes Only pre-credits vignette, Bond places flowers on Tracy Bond's grave, which is a reference to his short-lived marriage to her at the end of On Her Majesty's Secret Service.

*** Bond movies with opening vignettes that relate in some way to what comes after include On Her Majesty's Secret Service, Live and Let Die, The Man with the Golden Gun, The Spy Who Loved Me, Moonraker, The Living Daylights, Licence to Kill, and all four Brosnan films.
† Binder designed every Bond title sequence from Dr. No to Licence to Kill (1989) EXCEPT From Russia with Love and Goldfinger, which were designed by Robert Brownjohn.
Posted by Carter Soles at 2:30 PM