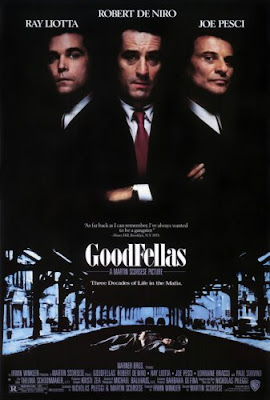 Sorry guys: this post explains why Goodfellas (1990), which Entertainment Weekly placed at #68 on this list of 100 all-time great films, is actually one of Martin Scorsese's least interesting, most overrated works.

As I have already stated in my post about Mean Streets (1973),


Contrary to its title, Mean Streets is not mean-spirited at all. It is upbeat, funny, and centrally about friendship and loyalty between a bunch of variously incompetent yet basically good-hearted "mooks."

Goodfellas replaces Mean Streets' humanness and nostalgia with cleverness and cynicism. Everyone in Goodfellas is out to screw each other and derives perverse pleasure from doing so. Goodfellas glamorizes brutality and violence, not friendship. And while I have no problem with films that depict how barbaric and misdirected groups of men can be, it is Goodfellas' patina of smug, self-congratulatory cleverness, a wit that pretends to be ironic and deconstructive but actually isn't, that puts me off this film. The film is so in love with its fucked-up characters and its own sense of humor that it cannot achieve a point of view outside of either, the way Heat does or Aguirre, Wrath of God does or even Funny Games does. Goodfellas celebrates and glorifies that which (I think) it means to parody. This is not good.*

When my undergraduate film students write papers about Goodfellas, they discuss it straightforwardly as a "great gangster film," not as a parody of one. Of course, part of that reading is bound up in (most of) those students' ignorance of the long tradition of gangster films upon which Scorsese is drawing here. Yet I argue that the film's rhapsodic tone and love of its despicable characters contributes strongly to this impression as well. As AV Club's Ryan Vlastelica fairly recently put it: "The film is like the cinematic version of a Ferrari: so fun to ride along with that you barely think about the sophisticated workings under the hood." He means that comment as praise, yet I see it as the source of the film's ideological danger.

Unlike Scorsese's own earlier works such as Taxi Driver, Raging Bull, and Mean Streets, Goodfellas does not make it clear that we should be critical of Henry Hill's way of life. A key difference between Goodfellas and its superior predecessor Mean Streets is from whose point of view the story gets told. In Mean Streets, it is Charlie (Harvey Keitel), the more mature aspiring wiseguy through whose eyes we see the reckless Johnny Boy (Robert de Niro) inexorably sow the seeds of his own destruction. This allows us to see Johnny Boy -- and by extension, this whole group of wiseguys -- for the cocky, violent idiots they really are.

Conversely, in Goodfellas, we see everything first person, via Henry Hill (Ray Liotta), this film's reckless Johnny Boy figure. Of course, Joe Pesci's Tommy DeVito is thrown in so that there is another even more psychotic and reckless individual around to make Hill seem more measured, but the point stands: Goodfellas transpires from the point of view of the idiot himself, rather than the smarter character who is trying to manage the idiot. This makes a big difference. It also doesn't help that Goodfellas lacks the sinister, tragic, discomfiting tone of, say, Raging Bull. It is, frankly, too much of a good time to effectively function as social critique.

That said, I know this is a subtle matter involving tone and point of view, and I acknowledge the potentially valid counterargument put forward by Matthew Eng, in which he argues that


[Scorsese] doesn’t warrant the blame for the chauvinistic vein in which Goodfellas’ bad fans have appropriated the film’s legacy to fit the superficially cool story they’d like it to be. (And between Taxi Driver and The Last Temptation of Christ, Scorsese has infamously seen his share of director-shaming misinterpretations.) Scorsese is, quite simply, far too talented and too intelligent a filmmaker to have made the movie Goodfellas is labeled as.

Is he really? I mean, I see this argument, and I agree that Scorsese is both enormously talented and highly intelligent, yet there is no reason he couldn't have slipped over the line on this film, accidentally lionizing the forms of masculinity he so effectively deconstructed in those other films Eng and I have mentioned. Eng continues:


Even as Goodfellas coats a glittering sheen over most of Michael Ballhaus' marvelously multilayered images, Scorsese delves pretty deeply into the foolishly warped mind of Henry Hill, whom he pegs almost instantly as a craven, class-A manipulator. [. . .] Henry’s relentless pursuit of criminal aims allows him to become the type of made man he deified as a boy, a transformation that is firmly rooted in the heroic images of his departed youth, when he was initially recruited into mob society. In many ways, Henry is the prototypical Goodfellas bad fan. From there, Scorsese and co-writer Nicholas Pileggi are ultimately less interested in creating heroes than in deconstructing Henry and his friends.

It's that "glittering sheen" I worry about. The tone of Goodfellas encourages us to enjoy Hill's madcap ride through his wiseguy fever dream, and ultimately to sympathize with him. Compare this to Raging Bull, in which whatever sympathy we might be able to muster for Jake La Motta (de Niro) is surely undermined by what a colossal, corrupt asshole he has been throughout the entire film. Sure, Bull makes La Motta's time in the ring look "glittery," epic, and aesthetically beautiful -- those fight sequences are some of the very best scenes of Scorsese's entire career -- yet anytime Jake steps out of the ring, he acts like a despicable, violent, antisocial asshole. Raging Bull makes very clear the ironic, even disgusted distance we are meant to impose when looking in on La Motta's disastrous life.

I am just not sure Goodfellas achieves that same ironic distance, despite Eng's noble defense of the film's deconstructive potential. I just don't see it that way, and that's why I find it hard to enjoy it.

Goodfellas is doubtless a technical masterwork, as this video -- which also foregrounds how intensely the film aligns the viewer with Hill's subjective point of view -- demonstrates:

But in the end, despite its high level of cinematic craft, I just find Goodfellas to be:

(1) Too clever in a self-satisfied way to function as a sufficiently deconstructive ideological critique of the violent masculinity it displays,

So fuck Goodfellas -- give me Mean Streets. Or give me Michael Mann's crime film masterpiece Heat (1995), which is fifty quadrillion times better than Martin Scorsese's vastly overrated gangster comedy.

--
* Kubrick's A Clockwork Orange has the same problem. I think -- I hope! -- it means us to be critical of Alex's antisocial behavior, yet it makes him so likeable and amusing and hard to censure that it may ultimately fail as satire, at least of anything other than the state apparati that attempt to condition the violence out of Alex via torture.
Posted by Carter Soles at 7:07 PM