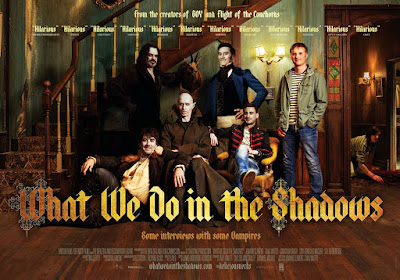 Over the past couple of months, I have seen a few films that stand out in a special way. These three -- What We Do in the Shadows, Nightcrawler, and The Skeleton Twins (all 2014) -- are, of the several films I have watched lately, the ones that gave me the most pleasure as I watched them and stuck with me most poignantly afterward.*

What We Do in the Shadows is a mockumentary comedy about a group of vampires living together as flatmates in Wellington, New Zealand. It is the outright funniest film I have seen all year (beating out Spy). The filmmakers really understand the classic tropes of the vampire genre. They skewer them all brilliantly. Furthermore, there are some delightfully unexpected twists, as when the newest member of the vampire clan brings his human "best mate" Stu over to meet his undead roommates -- and Stu ends up becoming the most popular member of the group. 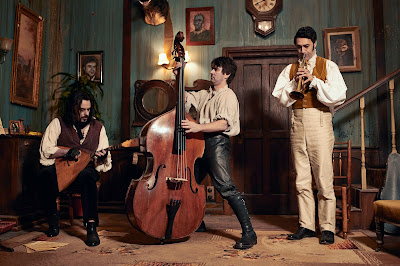 Vladislav, Deacon, and Viago jam out in What We Do in the Shadows.

What We Do in the Shadows really nails the drily witty mockumentary form, standing alongside the Christopher Guest-directed classics Waiting for Guffman (1996), Best in Show (2000), and A Mighty Wind (2003) as an all-time great of this particular comedic subgenre. Like the Guest films that I assume inspired it, Shadows culminates in a big event that brings all the key characters together, in this case the annual Unholy Masquerade Ball. The events that transpire during and after that sequence alone are worth seeing the movie for, as are the flatmates' occasional run-ins with the local police.

Shadows contains a few moments of graphic blood and gore, though (to my eye anyway) these come across as more excessively Monty Python-esque than truly horrific. No, the dominant tone here is laugh-out-loud funny -- there is one sequence in the film, when  neat-freak vampire Viago is laying down newspapers to protect his couch before he attacks a victim, that had me belly laughing for quite some time. 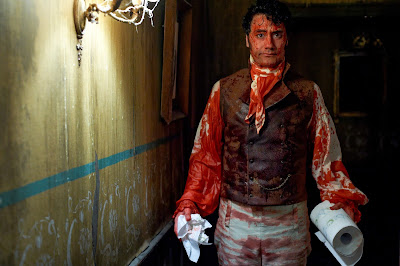 Viago is a bit of a neat-freak.

Despite its mild use of horror elements (in addition to the blood, there is one vampire attack that is rather sudden and unexpected), I would recommend What We Do in the Shadows to practically anyone. If you like comedy in general and/or witty mockumentaries in particular, you will find plenty to enjoy in Shadows.

Writer/director Dan Gilroy's Nightcrawler is also something of a comedy, serving as a bleak satire of the news production business. However, despite its darkly satirical tone and many absurdist moments, it probably has more in common with the urban noir thriller than with any other genre. It is more pulse-pounding than laughter-producing. 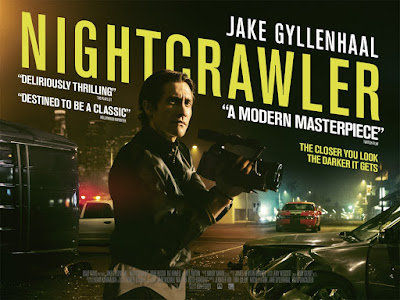 As A.J Snyder writes in his capsule review of Nightcrawler, "While much has been said about the intensity of [Jake] Gyllenhaal's performance, and rightfully so, I feel like the single greatest strength of the film is its allegory for capitalism's current mode of racing to the bottom-most line." That's it exactly. While Gyllenhaal's central performance is intense and intriguing and delightful, the whole film -- including Rene Russo's superb costarring turn -- is so cleverly put together and expertly paced that I was completely on the edge of my seat the whole time through.

Furthermore, the film has a clearly articulated central theme about the cruelty and inhumanity that lie at the heart of media consumerism which it conveys quite efficiently via what you see and experience, without undue expository dialogue. (Thematically it reminded me a bit of Sofia Coppola's underrated The Bling Ring.)

Lastly, there is cinematographer Robert Elswit's (There Will Be Blood) sublimely photographed setting: the city of Los Angeles. Nightcrawler is an exemplary "L.A. film," joining the ranks of such classics as Chinatown, Shampoo, Heat, Collateral, Short Cuts, and Boyz n the Hood in taking full advantage of the particular way L.A. sprawls around its various disparate neighborhoods, crisscrossed by freeways. It's a weird place (both geographically and vibe-wise) that I always enjoy seeing depicted poetically on screen. Nightcrawler captures its unique qualities about as well as any film I've seen.

Yes, Nightcrawler is one of the finest thrillers and one of the sharpest satirical dark comedies I have seen in quite some time. Packed with uniformly great performances, a tight, compelling script, and haunting L.A. cinematography, it will surely loom large in my End-of-Year reflections.** 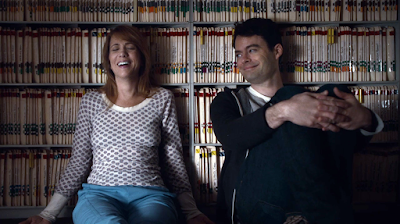 Kristen Wiig and Bill Hader in the touching, heartful dramedy The Skeleton Twins.

Set in an unspecified small town ("near Woodstock") in upstate New York, The Skeleton Twins is a film that, like Nightcrawler, I intended to see in the theater but ended up seeing on Netflix streaming. The movie is a somewhat dark yet ultimately heartwarming dramedy about an estranged twin brother and sister coming back into each other's lives after a ten-year hiatus.

The Skeleton Twins' dark side comes in part from its engagement with the topic of suicide. The film opens with Milo (Bill Hader) making a suicide attempt, and when that fails, the hospital calls his sister Maggie (Kristen Wiig) to come pick him up just as she is about to make an attempt on her own life the very same day. The film treats this remarkable coincidence with dark humor, yet it also reveals later in the proceedings that the twins' father successfully killed himself when they were young, adding dramatic weight to the suicide theme. Unraveling why both siblings find themselves so unhappy with their lives, and how and why they drifted apart from each other for ten years, becomes the film's raison d'etre. 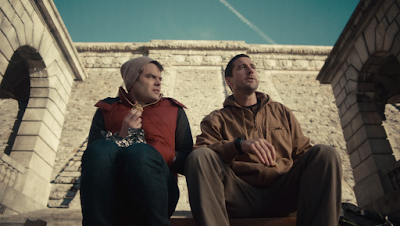 Milo and Lance get to know each other, with mixed results.

Part of the problem on Maggie's side is her inability to remain faithful to Lance, her upbeat, kindly, yet dimwitted husband (played to perfection by Luke Wilson, always my favorite of the two Wilson brothers). Lance wants to have children but Maggie doesn't, and rather than confront him him with this, she has flings behind his back. Meanwhile, Milo rekindles an old relationship that causes major problems for himself and reopens old wounds between he and Maggie. All of this conflict is so well scripted and performed, and the casting (including Ty Burrell as Milo's sexually conflicted old flame) so spot-on, that the film is simply a delight to watch. Both Wiig and Hader deliver nuanced characterizations that allow us to feel great empathy for these two lost souls even as we watch them make repeated mistakes. And the moments in which they laugh and get along together are very natural, believable, and warm. 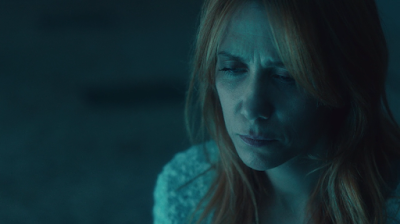 Kristen Wiig delivers a downbeat yet empathetic and lived-in performance as Maggie.

Ultimately, The Skeleton Twins is a carefully sketched portrait of strained yet loving sibling relations, and while the film's climactic episode may feel a wee bit contrived to some viewers, it is emotionally correct, and the film ends on a lovely note of reconciliation, as comedies should.

Plus, any movie with an unruly kid flipping adults the bird automatically gets my vote: 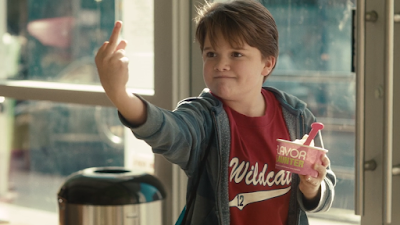 --
* I almost included a fourth film, Azazel Jacobs's Terri (2011), in this post, but despite its many delights and pleasures, that indie masterpiece is more offbeat and less plot-driven than any of the three I have included. I decided that it might be hard to recommend Terri to readers who don't enjoy meandering yet well-observed slice-of-life films about socially alienated weirdos quite as much as I do. You will be able to read my capsule review of Terri in this year's forthcoming End-of-Year Roundup.
** Here are links to my 2013 and 2014 End-of-Year Roundups. Yee-haw!
Posted by Carter Soles at 7:58 AM