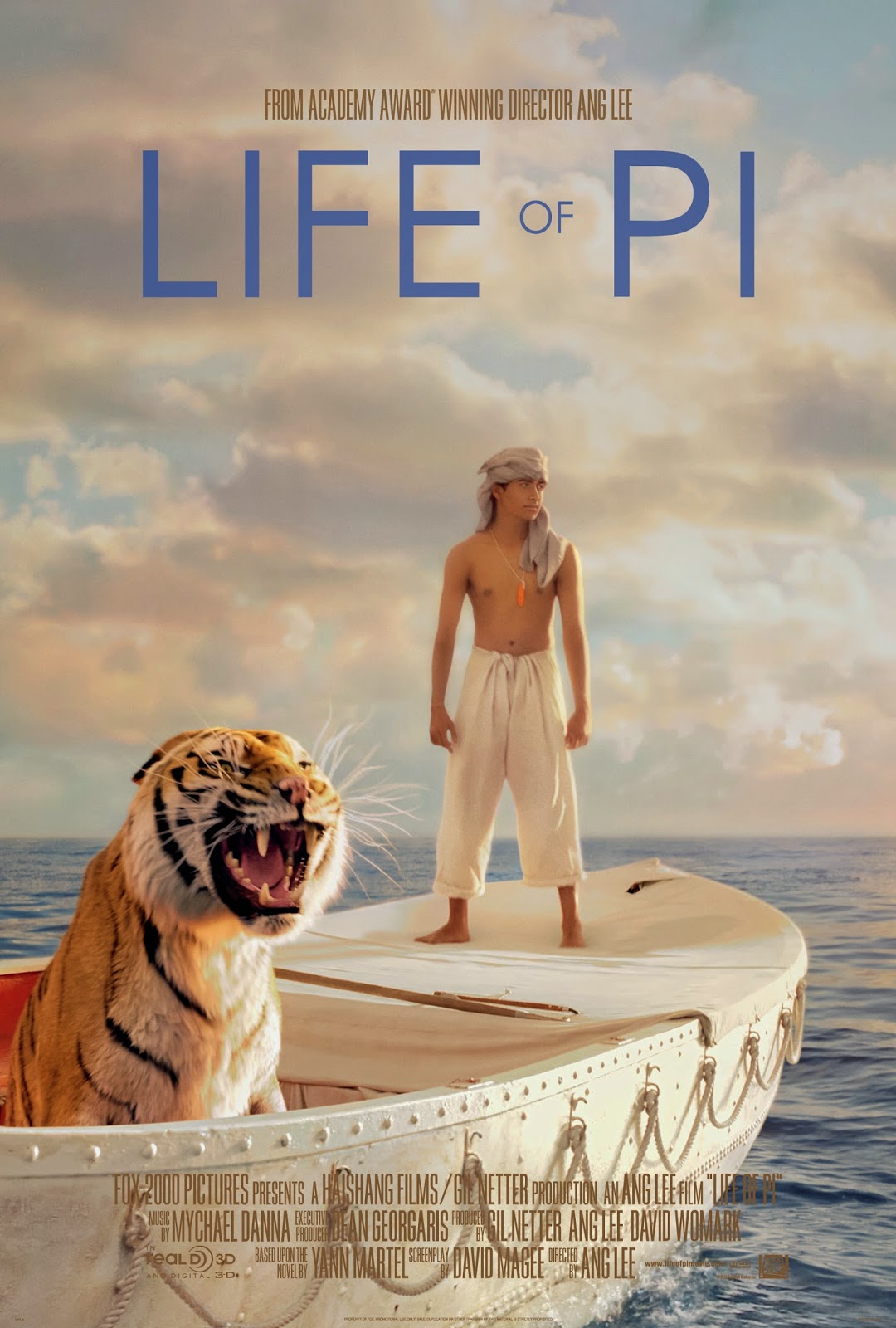 I finally saw Life of Pi -- on Blu-Ray no less -- and must confess to feeling underwhelmed. I am, in general, a big fan of Ang Lee's work, especially The Wedding Banquet, Sense and Sensibility, The Ice Storm, and Brokeback Mountain. Lee is one of the richest visual directors around, he composes beautiful shots and the visual poetry of his work (if you'll forgive the somewhat vague and pretentious phrase) is always breathtaking. Even those films of his that I like less -- Hulk and Crouching Tiger, Hidden Dragon -- are undeniable visual masterpieces rife with lovely eye-candy.

So what went wrong with Life of Pi?

Ang Lee-style eye-candy abounds -- the film is every bit as visually mind-blowing as the director's previous work. But there are two key problems that keep Life of Pi from resonating with me and had me checking my watch several times during its two-hour running time:

(1) Too many of its beautiful visuals rely too heavily upon digital effects. That is, they are way too obviously created by computers, and this (for me) causes a disjunction between the "real" photography and the CGI. It is not seamless, and it makes it hard for me to accept -- or care about -- what I am seeing onscreen. Much of what happens to Pi while he is alone at sea feels fake-o.

(2) The "twist" ending, which is, I admit, fairly impactful (at least in theory), loses most of its power due to #1 above and due to the early parts of the film focusing upon the wrong things.

I am actually not going to say too much about point #2, since my associate A.J. has already covered that topic brilliantly in this post on his own blog. Simply allow me to quote a chunk of and briefly comment upon his assessment [which includes SPOILERS]:


Early on in the film's second part, Pi attempts to live with a vicious Hyena, a calm elder Orangutan, a Zebra with a severely broken leg, and, of course, a large Bengal Tiger. This clearly cannot, and (SPOILER) does not, work. The carnivorous animals eat the Zebra and the Orangutan, and eventually Richard Parker [the tiger] eats the Hyena.

Now in the novel, each animal death marks another strong blow against Pi's will to survive. And rightfully so, as these creatures are his sole companions and the only remnants of his entire life up to this point. Their deaths are specific and, frankly, horrifying. They feel harsh and cruel well before that little twist at the end of the book, making the "truth" that is revealed all the more disturbing.

Fastforward to the 2012 BIG HOLLYWOOD MOVIE adaptation and we are instead treated to a hyperspeed version of those profoundly impacting events. Rather than the slow torture, particularly of that poor Zebra, that ends with Pi alone with Richard Parker, we instead are treated to about one minute of quick dashing about ending far-too-soon with three animal carcasses (essentially blood-less and certainly gore-less) hidden under the Tiger's tarp-covered half of the raft. I cannot stress it enough, despite Pi's emotionally charged rebuking of the Hyena, this scene is not even remotely as powerful as it was intended--and ought to have remained. This diminishes the entire impact of the ending to the point where it feels pointless having left it in. When Pi talks to the Japanese business men at the end of the film [. . .] it just sounds like he's lying to them.

Now I haven't read Yann Martel's novel so have no basis for comparison there, and furthermore, I do not necessarily read Pi's concluding story told to the Japanese businessmen as being a lie per se -- I think the movie keeps its options open on that score. However, I completely agree with A.J. that the impact of that late scene is severely deflated by the fact that we do not care very much about those other animals (besides the tiger) nor do we care enough about Pi's parents (especially his mother) for the second version of the story to matter much to us. It is kind of momentarily horrifying but doesn't cut deeply enough.

The end of the film also makes me wonder, as A.J. does, why the first act even bothers introducing Pi's romance with Anandi? As it was happening, I was really invested in that part -- in fact, I think the first quarter of Life of Pi, before anybody gets on any cargo ship, is the best part of the whole movie, both narratively (it hasn't been mismanaged yet) and visually (not much CGI yet, just good, old-fashioned, beautifully staged and lit shots). But then the romance subplot goes nowhere, when that time could have been spent extending the scenes that build to the big payoff at the end. Isn't that the point of narrative cinema? 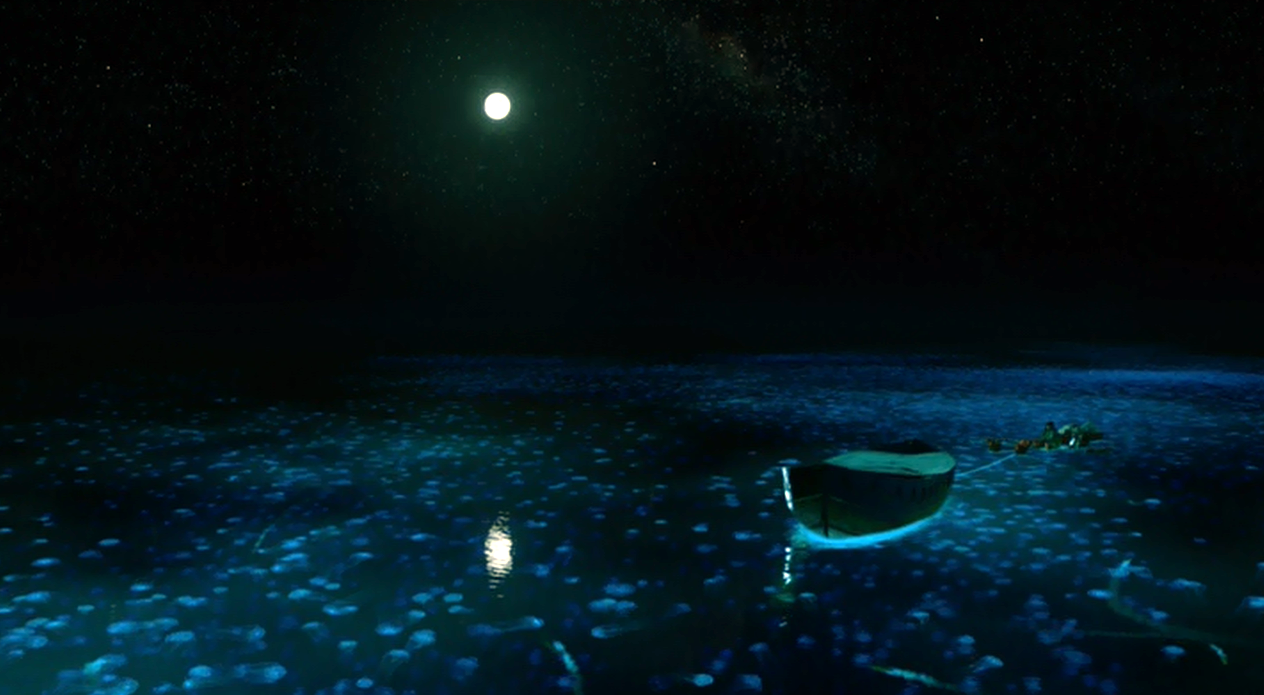 Visually stunning though it is, Life of Pi features a bit too much of this . . . 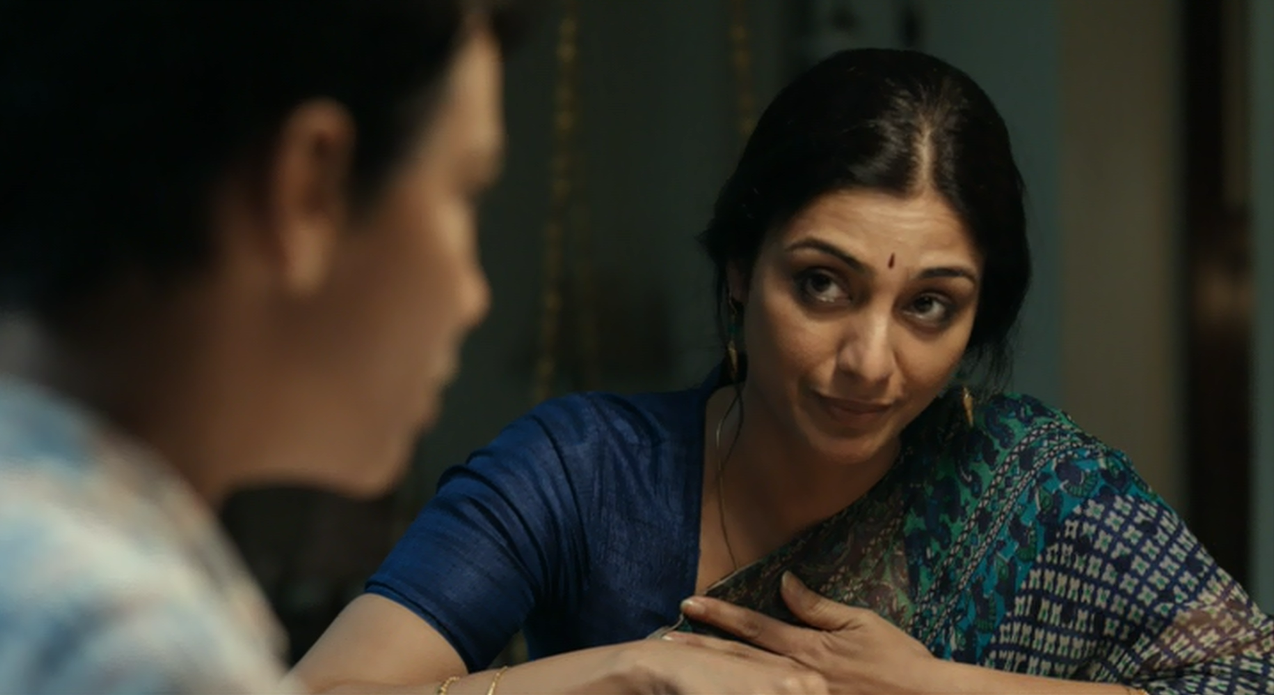 That said, I am not here to go on a screed against this film or against computer generated imagery (CGI) in general -- I know that this is how things are being done these days in Hollywood. Yet I expected more from Ang Lee and his team here. I expected the astounding CGI to blend more believably with the live footage in Life of Pi, yet it didn't. The moment I knew the film was in big trouble was during the sinking of the cargo ship, when Pi finds himself in the lifeboat with the zebra, and the little boat starts zinging and zanging all over the place, hyper-kinetically zipping around the sinking mast of the ship like some kind of cocaine-fueled, obviously digital, video-game version of itself. That crap doesn't impress me any more that the opening shot of Star Wars Ep. III: Revenge of the Shit does, and feels out of place in what is supposed to be a somewhat meditative and thoughtful Ang Lee movie.

Is Life of Pi worth seeing? Probably. It is almost a good movie, and the visuals taken on their own merits are mostly quite beautiful and pleasurable to watch. But as far as substance goes, if you want a truly great "survival at sea" story, check out the vastly superior All Is Lost. If you want a meditation upon the meaning of spirituality and existence, try Waking Life or Wild Strawberries. And if you want a film about how lies and truth get all mixed up, look to Rashomon, Rules of the Game, or Network.

In short, don't get your hopes up too high and you will likely find much to enjoy in Life of Pi. Me, I'll be eagerly awaiting Lee's next directorial effort.
Posted by Carter Soles at 4:49 PM