To begin with, I think choosing the "best" acting performance or film of a given year is an inherently absurd task, since it's comparing apples to oranges, but that said, there is something seriously fishy about the fact that neither All Is Lost nor its star, Robert Redford, were nominated for Best Actor or Best Picture at this past year's Academy Awards. In my personal ranking, I wouldn't put Redford's performance above Chiwetel Ejiofor's in 12 Years a Slave, or above Bruce Dern's in Nebraska, but Redford should have given actual winner Matthew McConaughey a run for his money in the category.* And the film itself may not be better than either of the above-mentioned movies either, but I assume it is better than either Gravity or Captain Phillips, both of which it may even structurally resemble at certain points, being an adventure film about survival at sea.**

In short, I am baffled that All Is Lost was not an even more buzzed-about and critically recognized movie of last year. True, Entertainment Weekly's Chris Nashawaty placed the film at #9 on his year-end "Top 10 List," but meanwhile the more erratic EW critic Owen Gleiberman didn't place it anywhere on his list (the only films they both listed were Fruitvale Station, 12 Years a Slave, Before Midnight, and Gravity). And how the Academy overlooked this wonderfully written, shot, directed, and acted gem is a mystery to me.***

The reason for my bafflement is that, taken as a whole, All Is Lost is simply one of the best films I have seen in many years. Its premise is utterly simple, yet it is executed with such confidence, competence, and artistry (on several levels) that the end result is utterly absorbing from start to finish. Redford gives the performance of a lifetime in this one-man show, even though (or perhaps because) he speaks only about three lines of dialogue (one of which is an opening voice-over) throughout the film's entire one-hour and forty-five minute running time. The visuals throughout are spectacular, both onboard his damaged yacht and during the various scenes of underwater cinematography. The editing is very well paced, fast enough (especially during the many action sequences) to keep the viewer on the edge of his or her seat, yet allowing for graceful pauses in which Redford's unnamed protagonist -- and the viewer -- may take in the ramifications of each new calamity and setback. And even when things are going wrong for "Our Man" (as the end credits call Redford's character), which is much of the time, the scenes at sea are nevertheless breathtakingly beautiful. Some of the best shots are during a nighttime storm-at-sea sequence, or when the camera shows us a perspective on events taken from underwater.

One of many beautiful underwater shots from All Is Lost.

I could go on, but in some ways this is a film best seen, not talked about. I cannot imagine who wouldn't enjoy this film. It is a suspenseful, taut adventure yarn with extremely high stakes for its main character, conveyed in simple, and always strikingly visual, terms. And while there are some subtle hints at a political sub-theme (about which more in a moment), the main emphasis here is upon the survival narrative, and the small but crucial choices Our Man makes at each step in his solitary struggle against chance and the elements. All Is Lost presents a well-crafted, gripping story conveyed with great precision and surprising depth.

One other aspect of this movie that I enjoyed is the very subtle implication that (a) Our Man is a man of privilege, given that he is white, owns a yacht, and eats "organic" canned beans, etc., and that (b) many of his calamities come about due to the global consumer capitalist system from which he, as an affluent American white guy, presumably benefits. I do not wish to give away any spoilers, but let me simply say that a couple key plot turns occur as a result of shipping containers like the kind seen in the photographs of Edward Burtynsky: 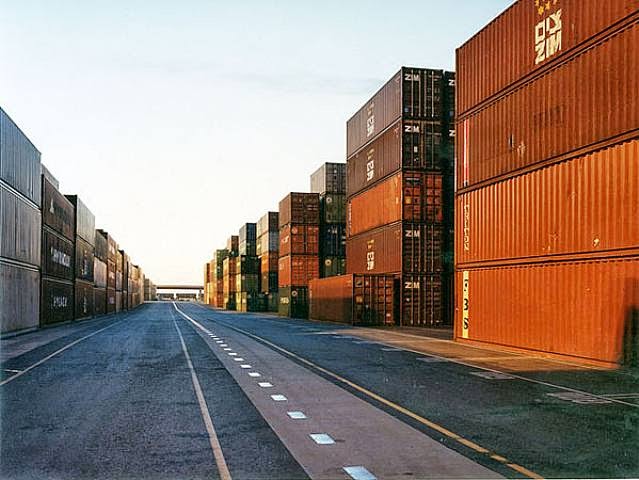 The idea here is that, as in so many monster movies and "revenge-of-nature" films, All Is Lost connects the misfortunes that befall Our Man at sea to these emblems of the hidden labor flows undergirding his exploitative lifestyle under global consumer capitalism.

But you do not need to notice, care about, or even agree with my ideological interpretation to truly enjoy All Is Lost. I highly recommend this great, well shot, amazingly acted adventure movie to all my readers.

Redford's unnamed character experiences an extremely vulnerable moment,
the likes of which I have never seen in the actor's earlier career.

--
* Yes, I have now seen Dallas Buyer's Club and while I really like the film a lot and think McConaughey is great in it, he's got nothing on Ejiofor or Dern.
** Please do not give too much weight to this last sweeping comparison; I do not believe I have any right to judge a film I have not seen, and I have seen neither Gravity nor Captain Phillips. I presume the latter is a very well-made thriller but I am suspicious of its racial politics; the former is surely visually dazzling but for whatever reason I just am not drawn to it.
*** Though not really: the strong likelihood is that distributor Lionsgate did not have the wherewithal or inclination to mount an effective Oscar campaign for All Is Lost. Perhaps they had their hands full with the release of The Hunger Games: Catching Fire.
Posted by Carter Soles at 12:07 AM

Email ThisBlogThis!Share to TwitterShare to FacebookShare to Pinterest
Labels: All Is Lost, review, Robert Redford