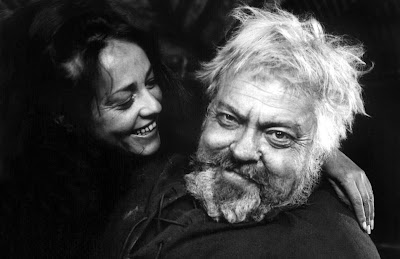 Jeanne Moreau and Orson Welles in Chimes at Midnight (aka Falstaff).

I was very fortunate to get to see Orson Welles' late-career masterpiece Chimes at Midnight (a.k.a. Falstaff) at the Dryden Theater on Saturday July 9th. This great film has been hard to see in the United States until this recently restored version started touring select cities this year. Like many of the films Welles made post-1947, copyright issues and distribution problems have kept Chimes from ever getting a Region 1 (North American) DVD release. My hope is that this recently restored Janus Films version will change that.

Critical consensus places Chimes at Midnight high in the running for one of Welles' best films -- it's considered a top-tier Welles entry alongside his debut Citizen Kane (1941), his brutally truncated follow-up The Magnificent Ambersons (1942), and his brilliant film noir Touch of Evil (1958).* Calling Chimes "the story that [Welles] had to tell," Simon Callow writes that


Nothing stirred him, moved him or grieved him more, and he strove, over more than thirty years, to find the perfect form in which to tell that story, a form that could encompass both the personal and the universal. The circumstances in which he filmed were almost perversely difficult and yet for once everything, or nearly everything, worked in his favour. Heart and mind, form and content, casting and location, technology and manpower -- all meshed perfectly.**

I agree with this assessment. Along with Kane and Touch of Evil, Chimes at Midnight is the Welles film that feels most complete, the most consistent and harmonious. Okay, sure, his Macbeth (1948) and The Trial (1962) are also quite consistent and unified, yet maybe not quite so impactful or heartfelt as Chimes is for me. 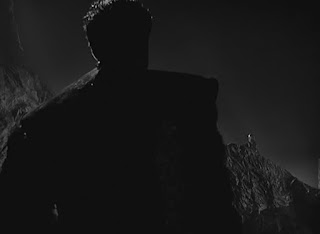 Despite its visual brilliance, Welles' Macbeth in particular reveals its low budget and difficult production circumstances in ways that, at times, feel claustrophobic and limiting -- for example, its over-use of vertiginous low-angle shots and extremely high-contrast lighting to make its single set feel more varied and cinematic.

Chimes, by contrast, benefits from its limited locations: the lively pub where Falstaff dwells, the barren halls of King Henry IV, the muddy battlefield, the woods where Hal tricks Falstaff. Chimes' world is only a degree or two more physically expansive than Macbeth's, but it makes all the difference. The world of Chimes is, like all of Welles' film-worlds, exaggerated and hyper-real, yet it is one of the most organic and lived-in film-worlds Welles has ever brought to the screen.

In sum, Chimes at Midnight is the most holistically satisfying and emotionally resonant Orson Welles film I've seen.

Furthermore, Falstaff is the role Welles was truly destined to play. Even more so than Citizen Kane or Touch of Evil or even Carol Reed's The Third Man, Chimes at Midnight shows off the pathos and power of Welles the actor. It is one of the few performances of Welles' in which I really believe the whole time that I am watching a character live his life onscreen, rather than watching Welles winkingly portray a character onscreen.† Falstaff is probably my favorite Welles performance, tied with The Third Man's Harry Lime and besting Charles Foster Kane and even (personal fave) Hank Quinlan in Touch of Evil.

While the entire cast of Chimes (including Welles) is superb, Shakespearian stalwart John Gielgud is a complete standout here. He essentially steals every scene he is in, which is appropriate given that he plays the King. He is also one of the few characters in the film who delivers his Shakespearian dialogue in a measured, formal way -- this allows his speeches to really land, because the viewer can comprehend and take in everything he says. Callow says that "Gielgud inhabits the part with a seething inner energy, extraordinary emotional intensity and a flawless command of the King's volatility; it was -- of all people -- Lee Strasberg who said that when he saw Gielgud acting, he heard Shakespeare think" (One Man Band p. 384). 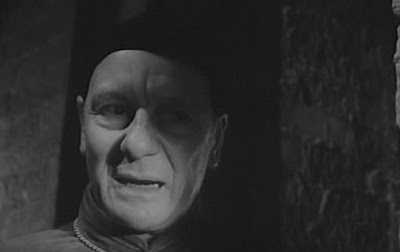 Perhaps it goes without saying that one should have at least a passing interest in Shakespeare to really enjoy and absorb what makes Chimes at Midnight so great. Welles and most of his cast, Gielgud excepted, tend to speak their lines quickly and naturalistically, so some of the intricacies of the language can be hard to catch, especially on a first viewing. Yet that hardly matters. As with much Shakespeare, one can let the words wash over oneself and simply enjoy the rhythm and the poetry of the lines, deriving the meaning from the context, which isn't hard to do.

Chimes' real draw is its brilliant shooting and blocking and use of settings, perhaps particularly in its knockout battle sequence, which must be seen to be believed. This is Welles in top form, and no small detail goes unnoticed. In Chimes -- a film Welles completed to his satisfaction -- each shot lends something important and resonant to the whole. 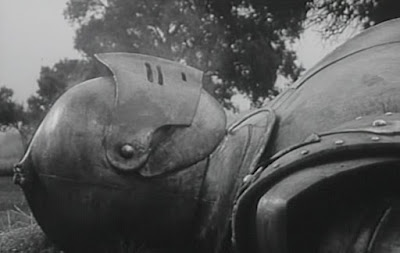 The steam cloud emitting from this man's helmet is one of the best visual gags
in Chimes at Midnight.

Callow concludes that the process of filming Chimes brought out the very best in Welles, justifying his inspired, seat-of-the-pants directorial methods. As Callow writes,


This is what Welles adored: the gallant, the democratic, the all-in-it together, the romantic way, which he had tried to create in the theatre (with sometimes inspired results) and hoped to be able to bring to film-making, a medium which, because of the large sums of money involved, almost immediately lost its playfulness, its innocence. The idea of innocence is at the heart of Chimes at Midnight, and innocence is what Welles was trying to restore to the process of making movies. For that to happen, everyone had to go along with it, willingly endorsing his assumption of the role of the crazy captain of a mad enterprise. (One Man Band p, 389)

This is precisely what happened on the set of Chimes: nearly everyone, by all accounts, embraced the process, putting Welles at ease and turning the finished film into something vibrant, alive, and special.

Indeed. If you have an interest in (or at least a tolerance of) Shakespeare and/or any interest at all in Orson Welles, you simply must see Chimes at Midnight.

Bonus Afterthought: The very day after I saw Chimes at the Dryden, my girlfriend and I headed north to the Stratford Festival in Stratford, Ontario to see Breath of Kings, a six-hour, two-part theatrical adaptation of four Shakespeare history plays: Richard II, Part One of Henry IV, Part Two of Henry IV, and Henry V. These are the same plays that form the basis for Welles' Chimes, so it was quite a head trip to see two very different versions of similar source material in the space of twenty four hours. The two halves of Breath of Kings -- which we saw in one day, with supper in between -- were really superb.

Seeing these plays abridged and smooshed all together in this form made me realize what an imperialist dickhead Shakespeare's Henry V is. It also lent credence to Callow's claim that


Henry IV is, line for line and scene for scene, is one of the greatest of Shakepearian roles, but it is rarely attempted by a great actor because the King disappears from the play for long sections of the action; this is to be regretted (p. 384)

As performed by lead actor (and Breath of Kings script adapter) Graham Abbey, the Stratford Festival production lives up to Callow's expectation of greatness. In Breath of Kings, the initially heroic, subsequently conflicted, and ultimately morose Henry IV is much more interesting and complex than the brave, wide-eyed Henry V. Maybe, as Welles' film seems to argue, Hal is only interesting when he's slumming it with Falstaff.

In the end, seeing these two so similar yet so different versions of the Henry IV plays was an enormous treat and was very interesting. My memory of Chimes was quite fresh as I watched similar scenes played in front of me on the Stratford stage.†† Comparisons arose. For example, I liked Welles's version of the eulogizing of Falstaff much better than the play's, but I liked Breath of Kings' physicalizing of King Henry IV's wounds -- Chimes' Gielgud seems physically frail but Breath of Kings' Graham Abbey used double-canes and, by the end, could barely walk. He crawls painfully to his litter and is carried offstage to die. Great stuff!

---
* I have a hard time watching Ambersons -- it is a film in which, for me, the "could have beens" haunt the extant text too much. Oddly, I don't have that problem with the similarly butchered The Lady From Shanghai (1947), whose original soundtrack was replaced with a schmaltzy love theme over Welles' objections and whose climactic funhouse sequence was severely shortened by the studio. Maybe it's because it is a film noir that the weird shifts in tone and extremely repetitious love theme work okay for me in this case.
** Callow, One Man Band (Jonathan Cape, 2015) p. 379.
† There is, of course, much ribald winking and tomfoolery in Chimes, attributable to Falstaff and friends. But none of it feels like Welles peeking through and commenting on the character while he's playing him. In Chimes, for once, he just is the character he's playing.
†† For aficionados, Breath of Kings was performed in the round, a new innovation this year at the Stratford Festival's Tom Patterson Theater.
Posted by Carter Soles at 11:47 PM