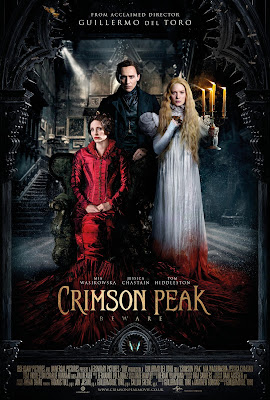 Wow! Guillermo del Toro's Crimson Peak is one of the best films I've seen this year, deserving of placement alongside The Babadook and What We Do in the Shadows as one of the three best horror-themed releases I've seen recently.

I say "horror-themed" because Crimson Peak is really a gothic romance, just as Shadows is really a comedy-mockumentary despite some explicit gore and a few good scares. Peak is a creepy, supernaturally tinged family melodrama, so superior an example of the cinematic Gothic that it must be named alongside those other two standout films.* 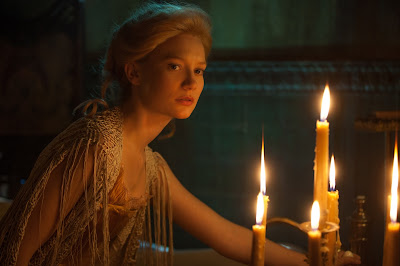 Mia Wasikowska as Edith, the heroine of Crimson Peak.

Plot- and mood-wise, Crimson Peak is a lot like The Woman in Black (2012), only much much better. Peak is what Woman could have been if the latter film had trusted its story, actors, and creepy tone and relied less upon jump-scares accompanied by hamfisted musical stingers.

I am not completely against jump scares, but I do not like "horror" films that rely too extensively on the device. I especially dislike movies that emphasize and/or broadcast every scare with a heavy handed, too-on-the-nose musical cue of some kind. This is what Nigel Floyd and Mark Kermode call "cattle-prod cinema," and I find it dull, pointless, and nerve-wracking.


Nigel Floyd sez: "We like horror films that build up a sense of suspense that is built into the narrative."

No, give me instead what film scholar Daniel Martin calls "restrained horror," a subgenre consisting of films "more suggestive than graphic" that "treat their subject with utter seriousness, jettisoning the [overt] humor" that characterizes films like Scream.**

While the restrained horror films Martin talks about (like Ringu and The Blair Witch Project) are not exactly Gothic films like Crimson Peak, they may be close cousins. Both restrained horror and the Gothic prefer the slow burn over the easy scare. And the use of deliberate restraint to provoke sustained terror, what Nigel Floyd refers to as "cumulative dread" in the video, creates a tone central to the Gothic. As this excellent review explains,


part of what defines the gothic is how paradoxically trusting it is; it relies on audience familiarity for much of its atmosphere and emotional power. We know the girlish innocent will be terrified in the great dark house; we know the gentry are hiding a terrible secret; we know what happens when you unlock Bluebeard’s closet. The gothic isn’t a genre of surprises, it’s a genre of dread, and to dread something, you must first know what it is.

Of course, I would argue that all genres are "trusting" of their audiences and exploit our familiarity with certain tropes and traditions to generate pleasurable effects. But I agree that as an exemplary specimen of the Gothic, Crimson Peak marshals its generic conventions and intertextual references in order to cultivate dread, and that it does so brilliantly and effectively. 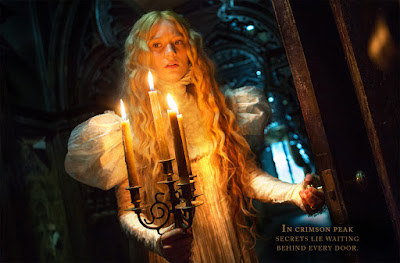 . . . is like Miss Giddens (Deborah Kerr) from The Innocents, one of the best gothic ghost-story movies you'll ever fuckin' see. 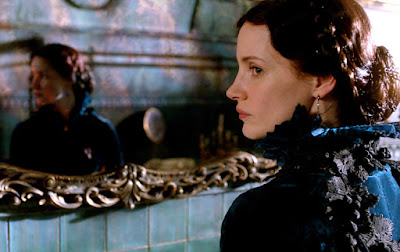 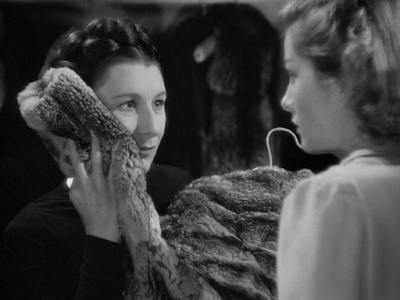 . . . is a lot like Mrs. Danvers (Judith Anderson) from Hitchcock's Rebecca.

I will not get into spoiler territory, but I must briefly mention Peak's breathtakingly lush sets and production design. The manor house to which Thomas takes Edith is an amazing feat of set design and construction. One of the most ingenious features of the house is a ragged hole in the roof that allows rain, mist, and snow to penetrate the very air of the main hall, enhancing the atmosphere of decay.†

The film's greatest visual achievement is probably its climactic snow scene, an amazing battle set among the various fixtures of Thomas' mining machinery. There isn't much graphic gore in Crimson Peak, but what violence occurs is brutal and believable, as this scene exemplifies.

And god, the performances. Mia Wasikowska is a particular favorite of mine, but all three principal cast members are superb here. I have never seen Tom Hiddleston, playing the mysterious pretty boy, do anything better. As I learned from this article, the original casting was going to be Benedict Cumberbatch as Thomas and Emma Stone as Edith. As I watched the film, I remembered this casting factoid and thanked the universe that the production instead landed Hiddleston and Wasikowska for these roles. And the supporting cast is great too, especially Charlie Hunnam as Alan and Jim Beaver as Edith's father.

This review sounds hazily disappointed that Crimson Peak isn't scarier, yet what does one expect from del Toro? Crimson Peak marks a return to the, well, peak works of the director's early career, the gothic masterpieces The Devil's Backbone (2001) and Pan's Labyrinth (2006).†† Maybe the more appropriate adjective to describe these films is unsettling -- yes, Crimson Peak is unsettling in a slow-burning, emotional, violent, twisted, and melodramatically satisfying way. Or, as AV Club's Genevieve Valentine puts it:


The film isn’t very scary, because it trades so carefully on scares we’ve come to expect. It isn’t very scary because its ghosts aren’t antagonists; they’re a manifestation of generational guilt, sure, but they aren’t here to haunt Edith—they’re here to save her. And the movie’s visual markers—so pristinely devoted to its ancestors in the opening acts—sidestep the ghosts altogether by the climax. Edith stands victorious in the snow, blood-red clay on her white hem and blood spattered across her gown. She’s closed the loop on the vampire narrative, all by herself.

All this plus amazing set design with lots of freaky red ooze. Definitely go see this movie. 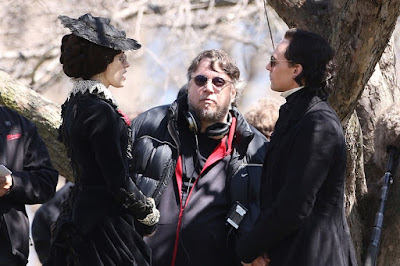 Guillermo del Toro sez: "Okay guys, for this next take, both of you will be fully immersed in horrid red filth."

UPDATE 11/5/2015: As the last line of my closing Genevieve Valentine quotation suggests, Crimson Peak solves Dracula's "Mina problem." This past summer and fall, my girlfriend and I watched several film adaptations of Dracula, including F.W. Murnau's Nosferatu (1922), Tod Browning's Dracula (1931), Hammer Films' Horror of Dracula (1958), Werner Herzog's Nosferatu (1979), and even the "sexy" Dracula (1979) starring Frank Langella. One thing we noticed again and again is how every single film version of the tale sells out Mina, diminishing her role in what is, in the source novel, a victory brought about by her research, record-keeping, and diligence. In the novel, Mina is an investigator and a writer, like Crimson Peak's Edith. Yet no film version ever allows her to play that central a role, instead handing off the investigative and vampire-hunting functions to Van Helsing and/or Jonathan Harker.

The closest any film version comes to empowering Mina is Herzog's Nosferatu, in which she is the sole figure who recognizes Dracula's threat and takes steps to stop him. However, Herzog's film ends with Mina sacrificing herself to the vampire rather than destroying him through direct action. The movie ends with Harker, now a vampire himself, riding off across the plains in daylight, perhaps emphasizing the monstrously adaptable and therefore unstoppable nature of vampiric patriarchy but nevertheless doing the deceased Mina no favors. 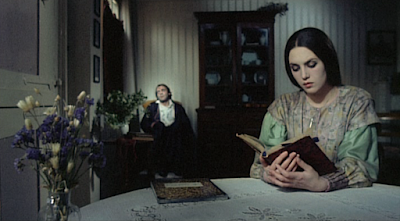 While Werner Herzog's 1979 remake of Nosferatu ridicules the narrow-minded inefficacy of Harker and Van Helsing, positioning Mina as the only character who comprehends and takes action against the Count . . . 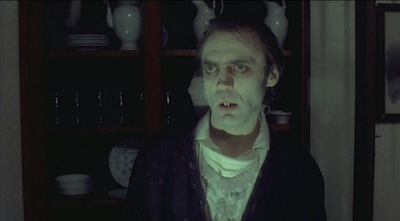 . . . it nevertheless kills Mina off, allowing Harker, himself now a vampire . . . 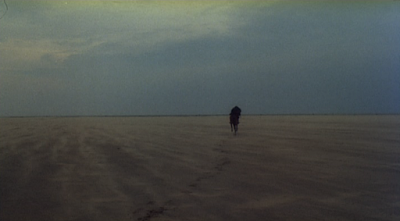 . . . to escape and presumably wreak havoc on the world. I read this as a critique of the relentless destructive power of patriarchy, yet the film makes this critique at the expense of its only significant female character's life.

As Valentine writes, "It’s notable that the blood-soaked ghosts of Crimson Peak are nearly all women, and all they ever do is communicate sins to help Edith avoid danger." Indeed, for Peak also tells the story of a battle between women for the love of a man. I am surprised I didn't think of this angle when I was initially writing this review because I am a feminist and I enjoy female-centered films. Yet there is so much going on in Crimson Peak from a genre perspective that I got lost in that aspect. I only later zeroed in on the "subversive," feminist implications of Edith's arc and the way in which the film "closes the loop on the vampire narrative" and solves the problem of Mina's longstanding cinematic defanging.

--
* Some of my readers may wonder why It Follows is not included in my brief list of top-notch horror of the past year. There is much pleasure to be had in It Follows, David Robert Mitchell's delightful retro homage to late-1970s and early-1980s horror. It Follows takes a Cronenbergian premise -- pretty much the same "sex-as-virus" metaphor that drives Shivers (1975) and Rabid (1977) -- and shoots and paces it like John Carpenter's Halloween (1978). Shot on location in Detroit, the movie has become something of a phenomenon in film-critical circles this year, earning the number two spot on AV Club's "The 25 Best horror films since 2000" list. I think it deserves all the acclaim it gets. It is a generally excellent horror film. But it just isn't as haunting, memorable, terrifying, or thematically audacious as, say, The Babadook or Crimson Peak. (In fairness, while film genius A.J. Snyder concurs with my feeling that It Follows is mainly "a collection of other people's ideas," this reviewer disagrees with me, arguing that "It Follows is no knockoff.")
** Daniel Martin, "Japan's Blair Witch: Restraint, Maturity, and Generic Canons in the British Critical Reception of Ring." Cinema Journal 48.3 (Spring 2009) pp. 39, 36.
*** The Jane Eyre connection is especially neat-o since Mia Wasikowska played the title role in a superb film version of Jane Eyre in 2011. And Peak's Dracula-ish vampiric themes take on additional resonance given that Tom Hiddleston starred in Only Lovers Left Alive in 2013.
† The sets, settings, and costumes are very important in a Gothic melodrama like this. One of the core concepts underpinning melodrama is that the emotions on display are too great to be captured in mere performances or words, so elements of the stetting including props, costumes, and nonverbal gestures do much of the symbolic work to convey meaning and feelings.
†† If I had to rank all the Guillermo del Toro films I've seen -- not easy since he moves between genres quite a bit -- then Pan's Labyrinth would surely be #1, and The Devil's Backbone would constitute a close second place. Next would be Crimson Peak, perhaps sharing the #3 spot with Hellboy (2004). Pacific Rim (2013) would be #4, and Hellboy II: The Golden Army (2008) #5. I have not yet seen his earlier films Cronos (1993) or Mimic (1997).
Posted by Carter Soles at 5:26 PM