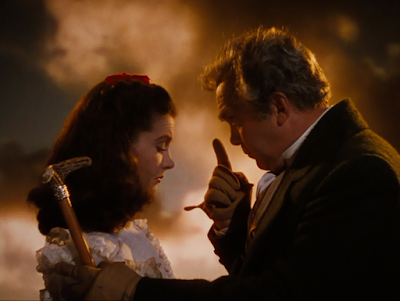 Vivien Leigh and Thomas Mitchell in Gone with the Wind.

Film fandom is a changeable, ever-morphing thing. It is a dynamic process that unfolds over a potentially long stretch of time (i.e., a filmgoer's lifetime). Films I revered quite highly in my youth may not resonate as much with me as I get older. As I change, and as the world changes, my perception of and feelings about films I've loved transmogrify and shift, sometimes quite dramatically.

One example of this is my changing relationship to the James Bond films. I grew up loving those movies, especially the Sean Connery ones. My god, I watched the shit out of those things. Yet as I have aged, the politics of those films -- their flagrant racism and sexism -- have become harder and harder for me to bracket aside or reconcile or feel okay about. As I get older and as I deliberately pursue learning all I can about cinema and its aesthetic and thematic possibilities, I find that my appetite for good ol' male-centered action films of all kinds (be they Bond films or superhero films or what have you) has diminished significantly. This is not a judgment about the genre, I know that action films can be great (hell, check out my gushy review of Mad Max: Fury Road) but it is certainly a genre from which I have drifted away over time. I may drift back. Who knows?

My point is that we longtime film fans often find ourselves in a position of loving a thing -- or starting to shift away from loving a thing -- that we do not wish to utterly repudiate or disown, but that makes us uncomfortable as we (and our movie tastes) mature. Gone with the Wind is just such a movie for me. As an exemplar of its genre (period melodrama), as an amazing aesthetic achievement, and as an absolute high water-mark in Hollywood film history, I love this film dearly. Put Gone with the Wind on in a room and I am absolutely glued to it. It is one of the best Technicolor films ever made and from an overall aesthetic point of view probably one of the best Hollywood studio films ever made, bar none. It is female-centered (a plus) and its performances (particularly by Vivien Leigh, Clark Gable, Hattie McDaniel, Thomas Mitchell, and Olivia de Havilland) are uniformly superb, in many cases outright iconic. In terms of its historical importance, artistic superiority, and overall yield of viewing pleasure, I would place Wind higher on Entertainment Weekly's Top 100 List than Casablanca, which is romantic and well-crafted and chock full of great performances, yet not actually as good as many other great black and white films of the same period in my view.*

All that said, Gone With the Wind is, like many popular Hollywood mega-hits, morally reprehensible. Like its earlier cinematic forebear, Birth of a Nation (1915), Wind is brazenly racist throughout. The movie views slavery with benevolent nostalgia, and it endorses (or at least excuses) domestic violence and rape as well. So my love of Gone with the Wind as an aesthetic object is at odds with my disgust over the film's ideological messages.

This brings me to a deeper question about "best of" lists like EW's. If one includes Gone with the Wind on the list despite its overt racism and misogynistic endorsement of domestic abuse, why not include Birth of a Nation? Alternately, if one brackets out Birth on moral/ethical grounds, then why include the equally conservative, reactionary, racist, and sexist The Dark Knight (2007)? I don't have ready answers to these questions but I wonder about them.

In any case, for me, Gone with the Wind goes into the same category as the James Bond film Thunderball (which, despite my recognition of its retrograde morality, I love as a perfect piece of action cinema) or George Miller's recent masterwork Mad Max: Fury Road. I know there are some serious ideological (or in the case of Fury Road, environmental) problems with it, yet I love the film itself with all my cinephile's soul.

Particularly given that the white population of the U.S.A. is still largely in denial about the structural racism that pervades our society, it is hard to write about Wind without calling it out for its discriminatory ideas. So let us begin with the film's most subtly sinister scene, the one I call the "Scarlett as benevolent slaver" scene. This comes halfway through the film, when, after the Civil War, Scarlett O'Hara (Vivien Leigh) is running her own mill and chooses to lease some convicts as laborers. After looking at a lineup of convicts for hire, Scarlett's longtime friend and business partner Ashley Wilkes (Leslie Howard) raises an objection to her plan, saying:


I do wish you'd let me hire free darkies instead of using convicts. I do believe we could do better.

Scarlett protests, accusing Ashley of being too soft on such people. Then this dialogue ensues:


Ashley: Scarlett, I will not make money out of the enforced labor and misery of others.

Scarlett: You weren't so particular about owning slaves.

Ashley: That was different, we didn't treat them that way.

Oh, I get it now. Slavery was totally fine in Ashley's mind because, at least in his imagined version of it, whites never mistreated their slaves the way Scarlett's foreman whips and starves her newly hired convict labor force. So long as we enslave people NICELY, it's okay, is it? Thanks for explaining that one, Ashley. 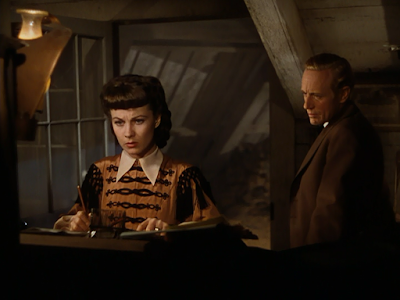 An extremely strange and morally backward sequence in which Ashley (Leslie Howard) explains why slavery was actually really good for black people -- so long as it was conducted nicely.

Ashley's swift glossing over of the multitude of cruel horrors visited upon blacks during the transatlantic slave trading years is not the only way in which Gone with the Wind offends. The even bigger lie here is that the film shows us a line of mostly white convicts. As has been extensively documented in Slavery by Another Name, what actually happened after Reconstruction is that white authorities arrested black folks in great numbers on virtually any pretense, placing them into the prison system, thereby allowing them to be contracted out to various industries for essentially no wages. This was how the practice of slavery was continued even after the formal institution of slavery was abolished in the U.S. 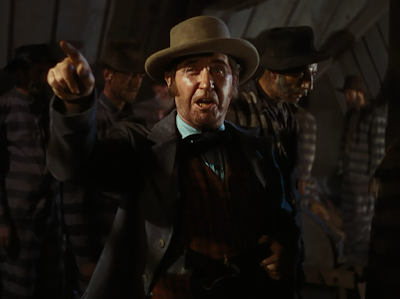 Mill foreman Johnny Gallagher displays his line of white convicts for lease as hard laborers. This sequence glosses over the reality that the majority of leased convicts were black men.

Oddly, then, Gone with the Wind suggests that blacks are somehow better off being slaves than they are being free. Taken together with the film's depiction of blissfully loyal plantation blacks including Hattie McDaniel's famous "mammy" character, plus the deep, melodramatic pathos the film asks us to lavish upon the whites of the postbellum South, the film's pervasive racism is undeniable. 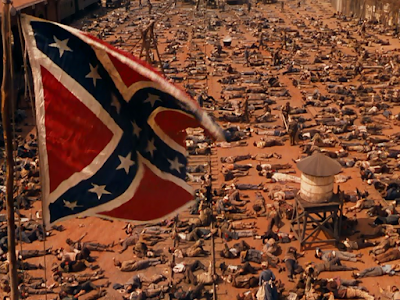 This shot of the tattered Confederate flag flying over the South's war dead succinctly conveys Gone with the Wind's racist ideological sympathies. On the other side of the coin, this shot concludes a breathtaking and technically masterful crane shot involving hundreds of extras, illustrating why Wind was such an enormously popular blockbuster.

All that said, one of the great strengths of Gone with the Wind, as with so many other classic women's pictures, is its foregrounding of an unrepentant, hard-charging heroine who takes command of her own destiny.** Indeed, it is the figure of Scarlett O'Hara that keeps me watching this lengthy film every time. Gone with the Wind is Scarlett's story, and she is one of the greatest screen heroines in Hollywood history, surviving war and impoverishment to rise again via strength of will and commitment to the land (helped by her loyal black servants, of course).

Scarlett's general greatness makes Rhett Butler's (Clark Gable's) callous rape of her in the last act of the film all the more marring and egregious. Presented as a jilted husband's attempt to get his due, the scene in which a drunken Rhett takes Scarlett by force is one of the most disturbing of the film. Maybe the scene is the film's attempt to show how corrupt masculinity is, even in the otherwise noble (if scoundrelly) Rhett, thereby strengthening Scarlett's motivation to press on without him. But I am not sure that reading is supported by what we see. Instead, I am left with the feeling that Wind wants us to view its intramarital rape scene as something Scarlett brought upon herself by rejecting her husband's sexual advances for too long, that her body was Rhett's to exploit and by god he was going to do it. This is a reprehensibly sexist and horrifying message. 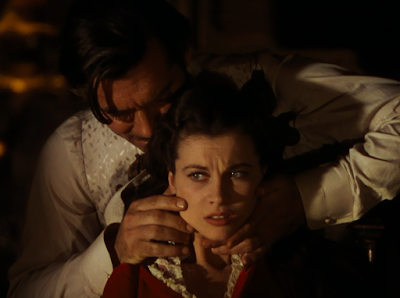 Rhett Butler as acquaintance rapist. Like the recent film Gone Girl, Gone with the Wind implies that Scarlett provokes Rhett's violation of her, casting the blame for her rape back on her, the female victim, rather than on the rapist.


Whatever else it may be, Gone with the Wind will always stand as independent producer David O. Selznick's magnum opus and as one of the most popular and successful big-budget pictures of all time. It is a major landmark in Hollywood history and one of the greatest aesthetic and dramatic triumphs of the Golden Age. And, like it or not, it is accurately reflective of America's extremely conflicted history of race relations. Gone with the Wind may wish white America to feel better about itself by glossing over our ugly history with comforting romanticism presented in lush, three-strip Technicolor. What I hope the film does for us today -- besides enchanting us with its cinematic virtuosity and epic narrative sweep -- is to remind us how far we still have to go to achieve social justice and a discrimination-free society.

--
* Vaguely noirish and/or romantic black and white films of the 1940s I would place above Casablanca include Double Indemnity, Treasure of the Sierra Madre, To Have and Have Not, and probably even Hitchcock's Spellbound. If we include the early 1950s I'd also throw in From Here to Eternity, A Place in the Sun, and Night of the Hunter. I don't mean I would strike Casablanca from the Top 100 list, just that I would rank any of these films higher.
** More great examples of classic women-centered melodramas include the Bette Davis vehicles Now, Voyager (1942), Dark Victory (1939), and Jezebel (1938), Olivia de Havilland in William Wyler's The Heiress (1949), Joan Crawford in Mildred Pierce (1945), and Barbara Stanwyk's astounding turn as the title character in Stella Dallas (1937).
Posted by Carter Soles at 3:30 PM