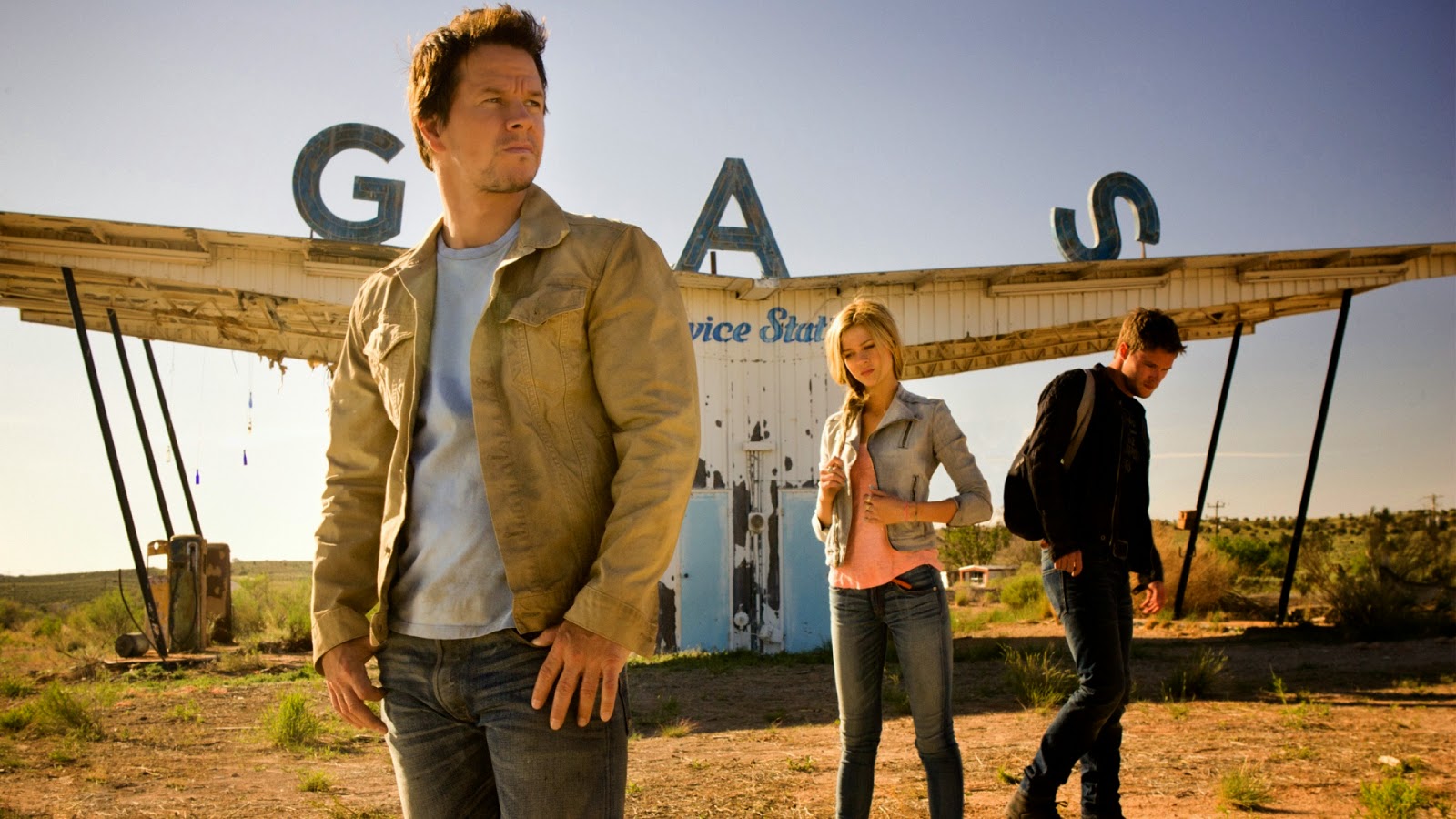 Or, Marky Mark is a racist asshole.

Believe it or not, this past week I watched Transformers: Age of Extinction. It is, of course, a shit movie, yet a surprisingly entertaining one. Aside from feeling some pronounced "action fatigue" around the two-hour mark, I more or less enjoyed watching Age of Extinction, which is more than I can say for any previous installment of the Michael Bay helmed Transformers franchise.* I mean, it's no Sharknado 2, which I saw recently and highly recommend, but it's WAY better than Exodus: Gods and Men, which I also saw recently and is so odious and boring and badly executed that I refuse to review it.**

I should note that I watched Transformers: Age of Extinction in a group and several of us heckled the thing the whole time. This home-brewed Mystery Science Theater 3000 element surely played a role in my ability to sit through Extinction's two-and-a-half-hour runtime. 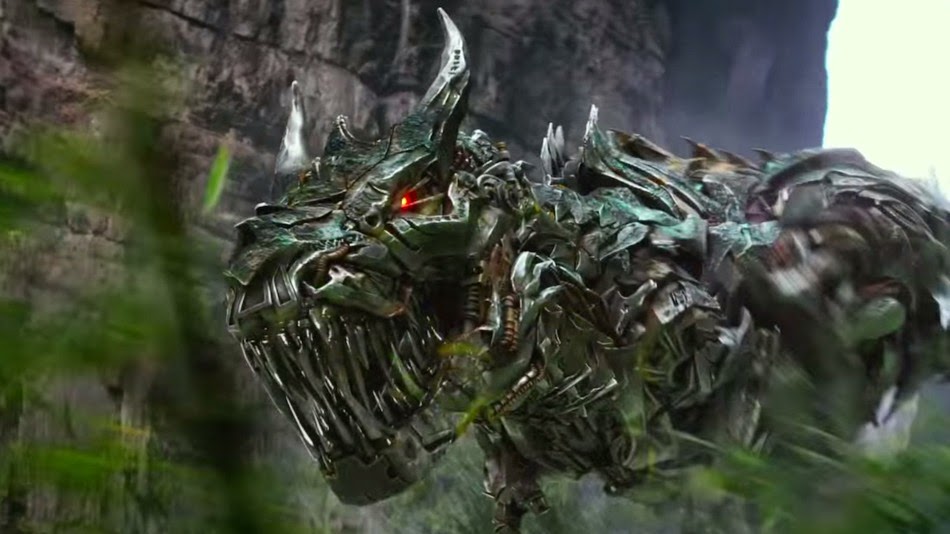 Silly and predictable though it may be, Transformers 4 is not without its pleasures:
this dinobot thing is pretty goddamned cool.

All that said, there are distinct positive qualities that make this film much more watchable than any previous Bay directed Transformers blockbuster. For one, the film eschews the director's usual over-use of "shaky cam" and chaos cinema fast cutting, instead shooting the action more traditionally to allow the viewer to see and understand the fight and chase sequences. This alone was a refreshing revelation. I do not so much mind how stupid and sexist and racist Bay's films are, because at least they do not pretend to be anything other than what they are: very big, very stupid summer action movies. Yet I got headaches trying to make sense of the shitty, impossible-to-follow action sequences in the first and second Transformers movies. Indeed, the first three Transformers films are so incomprehensibly shot and edited that their visual obtuseness has become a kind of running joke. Watching Transformers 4 I found myself wondering if Mark Wahlberg had a sit-down with Bay before shooting the picture and told him that he needed to cool it with the goddamn shaky cam already.

Or maybe Bay somehow saw this video and decided to make a few changes:

Then there's Wahlberg himself, who, despite embodying some questionable, contradictory ideological values, surely delivers the kind of charisma and star power a franchise of this magnitude needs.*** In fact, one could argue that Wahlberg's star persona, a perfect embodiment of vaguely retrograde, All-white-American masculinity, is an ideal fit for the tone of the franchise and Bay's work in general. Wahlberg's Cade is a man's man whose notion of fatherhood is limited to hamfisted attempts to control his daughter's sexuality by yelling at her. Once the shit hits the fan with the robots about fifteen minutes into the film, he is in his element, dropping one liners and surviving incredible stunts and fights that would kill any normal man ten times over. He doesn't blink an eye when Lucas (T.J. Miller), his longtime business partner and friend, is brutally incinerated in front of his eyes. He is the ultimate working-class tough guy.

Extinction's pronounced sexism extends to its numerous gratuitous ass shots of Cade's daughter Tessa (Nicola Peltz) wearing short shorts. Cade comments on this at one point early in the film, telling her she shouldn't wear them that short, but she more or less ignores him, much to the camera's delight. In fact it would seem that the whole film is onboard with the assumption that underage girls (Tessa is seventeen) make great onscreen sex objects -- only Cade himself, gruff old traditionalist that he is, raises any objection to this. Yet his paternal over-protectiveness reads as incredibly old-fashioned in 2014 and in any case he is too busy posing for Budweiser product placements in front of American flags in every other fucking scene of this movie to even notice that his daughter is dating Shane (Jack Reynor), a badass race-car driver guy. If he hasn't noticed that, how is he going to be able to keep tabs on what she's wearing?

Aside from wearing the aforementioned shorts, Tessa's main role in the film is to cower like a victim in or around cars so that male characters like Cade and Shane can rescue her. 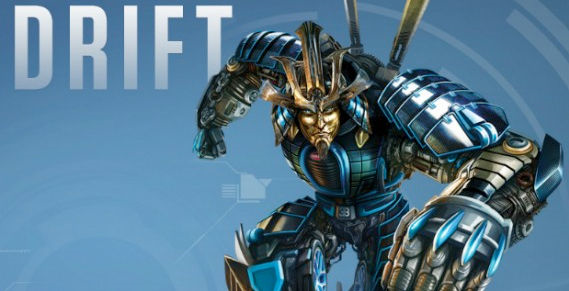 "Konnichiwa! I am Drift, an Orientalist stereotype of a Japanese samurai!" 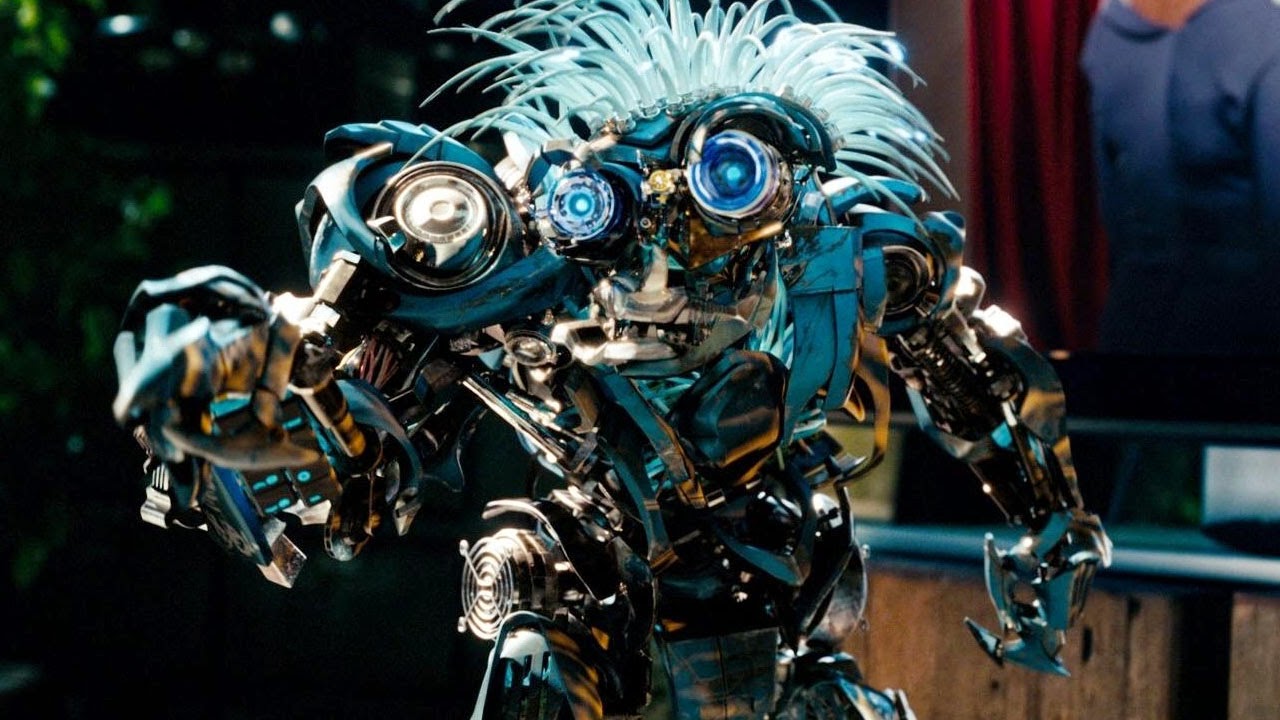 Brains (Reno Wilson) is a shrimpy blackface minstrel -- he is Jar-Jar Binks
re-imagined as an autobot.

And do we even need to talk about the shrimpy captive autobot Brains? Surely by now we can all spot a racist minstrel show when we see one?

Thus, in the end, despite a fun couple of hours spent heckling it, I must agree with the Red Letter Media guys' indirect review of Transformers 4: it is really not necessary viewing unless you are a die-hard fan of the franchise or are interested in seeing a Michael Bay film that doesn't give you a splitting headache.

But then again, I appear to be in the minority, since Transformers: Age of Extinction was the worldwide highest-grossing film of last year. 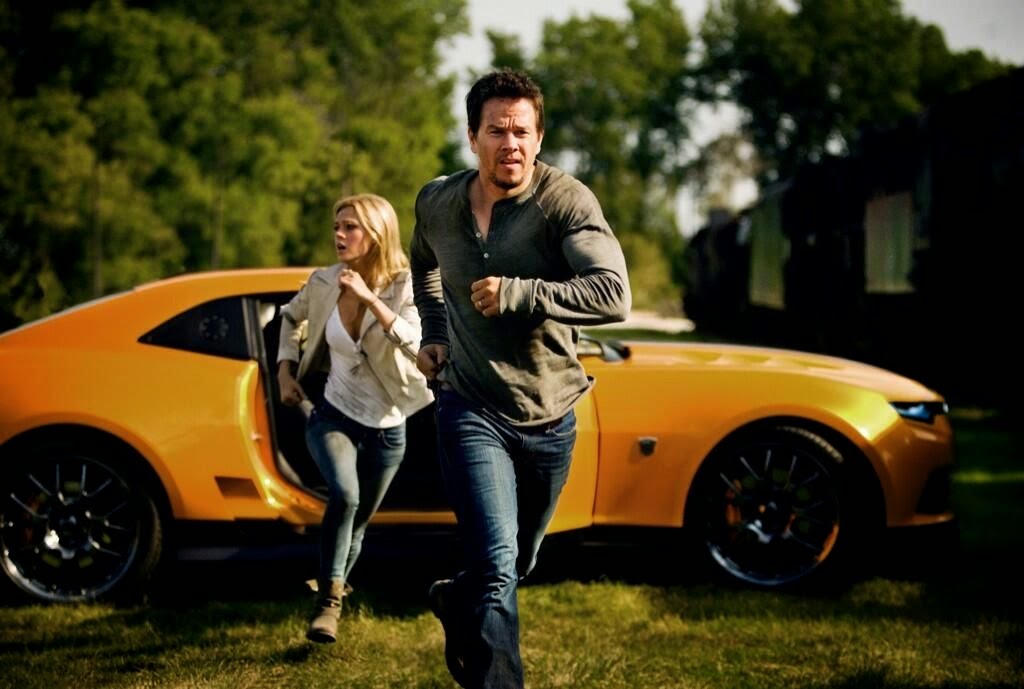 UPDATE 03/22/2015: Film blogger Tom Holmes agrees with my general assessment, placing Transformers 4 at Number Five on his "Bottom 10" list for 2014. From Tom's capsule review: "The best thing I can say about [Transformers: Age of Extinction] is that it is likely the last Michael Bay directed Transformers movie. When all of your promotional material for the movie puts emphasis on the Dinobots, and you don't use them until there is thirty minutes left in your nearly three hour movie, you've royally fucked up."

--
* I saw the first Transformers (2007) in the theater, Revenge of the Fallen (2009) once it reached Netflix, and made it about twenty minutes into the third movie before I had to quit from sheer boredom and ennui. Therefore I had planned to completely ignore the fourth film but then a former student told me I might actually enjoy it because there was less shaky cam used than in the previous films and therefore the action sequences were comprehensible this time around. That ex-student was right -- thanks for the tip, Steve!
** Sharknado 2 and Transformers: Age of Extinction are remarkably similar movies. In both, a white guy saves his wife and/or daughter from a science-fictional threat that will destroy a major city if he fails. One protagonist (Fin) is fixated on New York style pizza, the other (Cade) on Budweiser products. Both films feature climactic battles atop tall buildings. Sharknado 2 is funnier, more self-aware, less racist (though its sexually assertive black heroine dies), and far less of a brain-punishing time-suck than the Wahlberg film. Sharknado 3 is coming soon -- with THE HOFF!
*** Wahlberg, a former white rapper, has a history of real-life, racially motivated hate crimes.