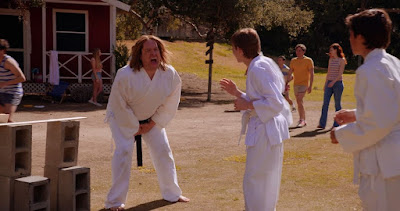 Distributed by Netflix as an eight-episode limited series, Wet Hot American Summer: First Day of Camp is a delightfully funny romp that gently parodies teen summer camp movies of the 1980s. It's also a prequel to the cult classic film Wet Hot American Summer (2001), written and directed by David Wain and Michael Showalter, who also co-helm the series.

It is hard for me to judge this film and follow-up prequel series with any pretense at objectivity. As a teen of the 1980s, I grew up on John Hughes films like Sixteen Candles (1984) and The Breakfast Club (1985) and raunchy teen comedies like Animal House, Meatballs (both 1979) and Porky's (1981) that the Wet Hot franchise so lovingly and wittily spoofs. I am the perfect target audience for Wain and Showalter's creations and enjoy both the film and show enormously.

What makes this series (and the original film) most special is its dynamite troupe of actors. What a treat it is to see the film's stellar cast -- Marguerite Moreau, Janeane Garofalo, Bradley Cooper, Amy Poehler, Christopher Meloni, Molly Shannon, Elizabeth Banks, Paul Rudd, Michael Ian Black, Zak Orth, David Hyde Pierce, Ken Marino, and Joe Lo Truglio -- back together and doing their knowingly over-the-top thing again. Like its filmic predecessor, First Day of Camp intentionally camps it up (ha, ha), perfectly executing its warm yet ribald tone due to the earnestness with which it commits to the cliches of 80's teen movies. As other reviewers have noted, the prequel series is at least as funny as the 2001 film, so if you like the one, you should like the other.

One of the greatest pleasures to be had watching the new Wet Hot prequels is how amusingly they play with the experienced viewer's expectations of what comes "next" in the original movie. The best example of this is the revelation that Gail's ex- ex- husband "Jonas," presumably just a random name given to a character we never see in the original film, is revealed in the prequels to be the former name of Gene (Meloni), Camp Firewood's lunatic camp cook. Indeed, Jonas/Gene's storyline is one of the best parts of the prequel series, involving as it does Gene's military past and an amazing climactic showdown with The Falcon, Ronald Reagan's assassin (Jon Hamm). 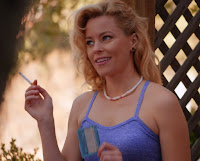 Newcomers Jason Schwartzman, John Slattery, Lake Bell, Jon Hamm, Kristen Wiig, and Michael Cera all add much zaniness to the proceedings, with Schwartzman's Greg and Hamm's Falcon particular standouts. However, the heart of the series lies more so with old favorites like Beth (Garofalo), Katie (Moreau), Andy (Rudd), and Coop (Showalter). Of special note is the work of Elizabeth Banks, a comedienne I have long felt is somewhat under-deployed in many of her film appearances (e.g., The 40 Year Old Virgin, Role Models). I find Banks' work, especially in these Wet Hot prequels, hilarious. Lindsay's introduction in the cold open of episode 3 is a series high point -- really spot-on, campy stuff. I am quite pleased that the prequel series gives Lindsay (and Banks) more of a central role than the original film does.

In this same vein, First Day of Camp gives us back the Paul Rudd we know and love from comedies like Clueless, Forgetting Sarah Marshall, I Love You, Man, and Role Models: the dimwitted fuckup with the heart of gold. Laughing at him chew scenery as disaffected slacker Andy is one of the great pleasures of Wet Hot American Summer: First Day of Camp. Paul Rudd belongs in comedy.* 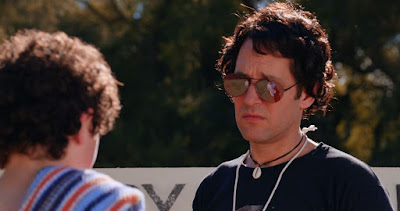 One could surely watch and enjoy the prequel series without having seen the original film. Still, one of the most pleasurable aspects of the series is how it sets up certain jokes in the film, giving them whole new layers of meaning. For example, when Beth is nervous in front of Henry the first time she meets him in the film, she offers an excuse about needing to meet "Jim Stansel," surely a throwaway name when first written and uttered. Yet the prequels bring Stansel to life and depict his dramatic exit from the series, making Beth's excuse extra-funny in retrospect. Another moment that is given additional weight by the existence of the prequels is Victor admitting to Neil he's a virgin near the end of the movie -- having seen his earlier braggadocio, this moment is even more meaningful now.

While less entertaining than the antics of the older counselors, the prequel series' (younger camper) Kevin storyline foreshadows Coop's in the film: each awkward guy ultimately fails to win the affection of a popular girl he desires. These two story arcs accurately deconstruct the fantasy of geeky men attracting women vastly out of their league --  a pernicious and damaging trope that haunts much geek-centered cinema. 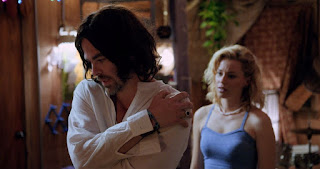 I find the whole Wet Hot prequel series to be of roughly equal quality, but Episode 3 "Activities" reveals Lindsay's background and introduces a hilarious Chris Pine as has-been rocker Eric. Next to the Jonas/Gene origin story, I think the Lindsay - Eric arc is the next best in the series. The very soul of the camp is at stake, and it takes these two relative outsiders to save everyone in the end. Along the way, the show has lots of fun sending up Pine's overwrought rocker persona and playing to the hilt Lindsay's obsession with the man and his unfinished masterpiece. (More on that shortly.)

The next episode, "Auditions," is really top-notch as well, and in some ways this is where the series really gets rolling. We meet a key antagonist, the Falcon (Hamm), whose scenes are brilliant send-ups of 1980s spy thrillers like War Games (1983). Sorry Mad Men fans --  Jon Hamm is another guy I enjoy most in comedies. I believe this is also the first of two appearances by Showalter in a cameo as President Ronald Reagan. As a youth of the Reagan era I appreciate his take, and I like how the Reagan cameo "rhymes" with Showalter's appearance as talent show emcee Alan Shemper in the 2001 movie. 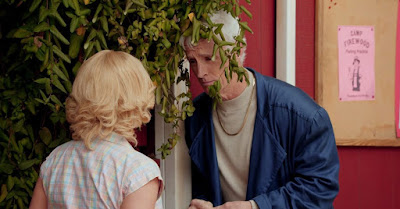 Episode 5 "Dinner" parodies slasher horror (especially in JJ and Lindsay's adventure to the spooky abandoned cabin) and some action movie Rambo-ish business with Jonas versus Victor. Victor runs again! This episode also depicts Susie's tryst with Claude Dumet, a very amusing and well-handled situation somewhat reminiscent of Aaron and Gail's May - December relationship from the movie. Yet unline the Aaron - Gail pairing, the Susie - Claude romance does not lead to marriage and instead depicts Susie as a self-aware young woman making her own (somewhat taboo) choices.

Eps 6 and 7, "Electro/City" and "Staff Party" are, for me, most memorable for their wonderful depiction of the flowering of Ben and McKinley's relationship. As AV Club's Erik Adams says, Bradley Cooper’s most important scenes are with Michael Ian Black. 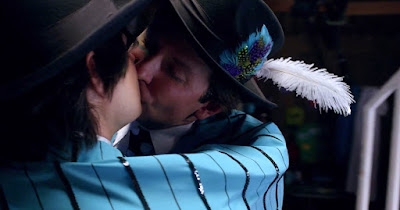 The Eric storyline culminates in an amazing rock finale in Episode 8 "End of Day," which concludes the series. Eric's show-stopping performance, an homage to similar teen-movie musical finales like those in Footloose and Revenge of the Nerds, is an amazing feat of earnest parody that provides an exciting climax for the series. Eric's performance of his musical magnum opus also reveals the source of the song we hear in the original film when Gene is training Coop -- it's "Higher and Higher":

Nothing to fear / It's only desire / Takin' it higher and higher

Yeah! This is one of my favorite reveals of the whole series.

I'll conclude my review by saying spoiler-free that the final post-credits sequence of the eighth and final First Day of Camp episode is an absolutely perfect, emotionally satisfying way to end the episode and the series. 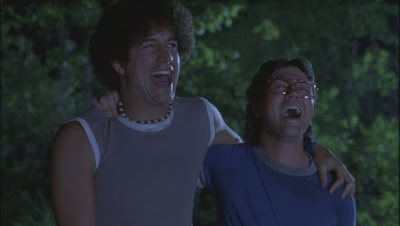 Neil sez: "Victor Pulak, you're okay by me!"

---
* Also deserving of mention are Rudd's turn as lamaze instructor Guy Gerricault in the late seasons of Reno 911! and his dramatic co-lead performance in Prince Avalanche. Despite my love of Paul Rudd, I do not enjoy the dumb, maddeningly boring Ant-Man (2015), a movie that half-assedly tries to be funny but fails.
Posted by Carter Soles at 8:18 PM