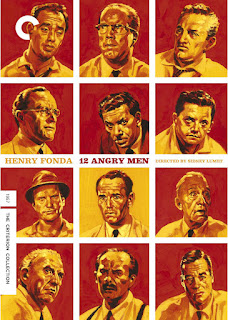 A few years ago, in 2011, the Criterion Collection released a new DVD edition of Sidney Lumet's classic 12 Angry Men. During a recent online Criterion Flash Sale, I bought said DVD and, once it arrived, joyfully re-watched this amazing film.

Courtroom dramas hold a special place in the American cinema. One of my college buddies, who went on to become a lawyer, was always particularly obsessed with Inherit the Wind (1960), Stanley Kramer's dramatization of the 1925 Scopes trial. Many folks consider the film version of To Kill a Mockingbird (1962) to be one of the best such dramas ever made. Other key entries in this category include Young Mr. Lincoln (1939), Mr. Smith Goes to Washington (1939), Judgment at Nuremburg (1961), Witness for the Prosecution (1957), Anatomy of a Murder (1959), A Few Good Men (1992), and Lumet's own The Verdict (1982) starring Paul Newman.* On the comedy side both Adam's Rib (1949) and My Cousin Vinny (1992) are standout courtroom movies.

For me, the original 12 Angry Men (I haven't seen the 1997 remake) stands as the greatest fiction film about the American legal system of which I am aware. It also stands as one of my favorite movies in any genre. I hereby nominate it for inclusion in my "Alternative Top 100," a list of films meant to be added to or swapped into the Entertainment Weekly Top 100 Films list to correct some of its oversights and errors.**

It's pretty much impossible to go wrong with the talented and consistent Lumet's directorial efforts. Indeed, there are other, later Sidney Lumet movies that are at least as good as 12 Angry Men including The Pawnbroker (1964), Serpico (1973), Dog Day Afternoon (1975), Network (1976), and The Verdict (1982). But like Duel does for Steven Spielberg and Mean Streets does for Martin Scorsese, 12 Angry Men gives us Lumet at his most stripped-down and lean. The film performs the amazing feat of taking a concept that could be boring and then executing it so brilliantly that it turns out to be a gripping, poignant, all-time masterpiece of the American cinema. 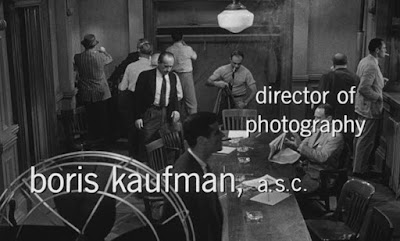 From the outset, Juror 8 (Henry Fonda) stands apart from the others -- that's him at the far right of frame, looking out the window.

The premise: twelve jurors spend the whole film sequestered in a jury room debating the verdict in a trial the viewer never sees. They stay in that one room and mostly talk. Sounds confining, even dull, yes? It isn't.

For one thing, Lumet and his cinematographer Boris Kaufman frame shots beautifully and keep the camera moving in lots of interesting ways. For example, one of my favorite shots is when one juror unexpectedly changes his vote. The camera tracks along the whole table at a high angle until it finally tilts down for a close-up of the guy who says he's changing sides. 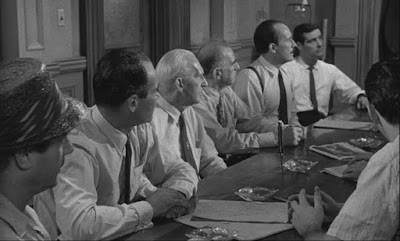 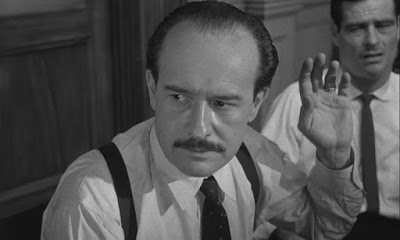 Or there's the long take in which Juror 10 (Ed Begley) is ostracized for making inflammatory, bigoted comments. As he talks, most of the other jurors leave the table one by one and then stand around silently, facing away from him. Lumet and Kaufman shoot the scene mostly in wide shot -- in fact, the camera slowly tracks backward as Juror 10 rants, then tracks back toward the table after he leaves it. Having the crestfallen bigot walk into the foreground while the rest of the jurors stay behind, facing away, makes an extremely powerful visual statement without feeling unnatural in the jury room's confined space. Lumet is a master of staging and blocking. 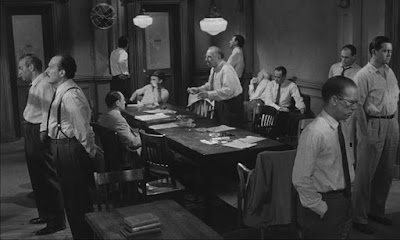 In fact, Lumet's just flat-out great with actors in general. These jurors mostly just talk and argue with each other, yet the dialogue feels very real and natural and all the key players give compelling, moving performances.

Then there's cinematographer Boris Kaufman, the youngest brother of legendary Soviet filmmaker Dziga Vertov. Kaufman not only keeps the camera moving in enlivening ways, but also brings a distinct and provocative visual style to 12 Angry Men.

Let's start with the four-plus minute high-angle long take that backs the opening credits and begins the film proper. The shot is a bravura display of both Lumet's ability to block and pace a wordless sequence, and Kaufman's knack for finding the perfect camera placement, shooting from behind an electric fan at one extreme end of the room. 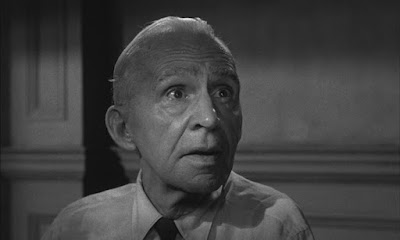 Furthermore, the close-ups and two-shots in 12 Angry Men are unusual, eschewing what cinematographer John Bailey calls the "compressed perspective" of typical Hollywood cinematography of the 1950s. Using wide-angle lenses for his close-ups, Kaufman deemphasizes the background and makes the foregrounded person's face stand out strikingly. As Bailey puts it quite accurately, in 12 Angry Men Kaufman's close-up work "walks that razor edge between it [on the one hand] being arresting and making you feel very present with the shot and [on the other hand] putting you off." ***

Bailey argues that whereas Lumet came from television and large 3-camera studio setups, former documentarian Kaufman was used to shooting close-up to actors, having shown a penchant for tight close-ups in his work with Jean Vigo in the '30s. Therefore much of the film's visual style may be rightfully attributed to Kaufman's contributions.

Nevertheless it is Lumet's amazing facility with actors and his penchant for liberal political advocacy that are most on display here. 12 Angry Men documents more that just a jury room proceeding -- it is a dramatization of the perilous place of hegemonic white masculinity just before the onset of the 1960s. In the 1957 of the film, the women's liberation movements and civil rights movements haven't yet begun in earnest, but the jurors know that their traditional, patriarchal way of life is being threatened.

For example, when Juror 10 goes on his racist tirade, subsequently to retreat into the foreground all alone, his rambling lines "I mean, what's happening in here? I speak my piece and you . . . listen to me. This kid on trial here, his type -- well, don't you know about them? There's a danger here. These people are dangerous" echo the thoughts of a generation who doesn't yet understand that the times are a-changin'. He genuinely expects everyone else to think as he does, to support him, and he is quietly devastated when he realizes his racist beliefs are not shared by anyone else, not when articulated so bluntly. 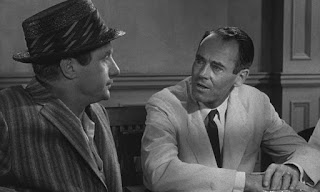 The anger the film's title alludes to may be superficially about the length of the jury's deliberations, a missed baseball game, or even the kinds of deep personal secrets that emerge over the course of the film. But the jurors' collective anger is really about their being forced to face a changing world in which people of color, like the defendant whose fate they will decide, must be accepted as their peer in a system which still unduly favors white men. The film is, in sum, about structural racism and classism in the American justice system -- a very timely topic indeed.


Lumet's union of cinematic technique with literary and thematic moral meaning precisely defines his directorial significance. Lumet may not always move the camera in ways that call immediate attention to his technique, yet his frame is rarely static but usually full, busy with life's detail and flow. Though the camera work is seldom spectacular, its controlled movement is subtle and filled with the movement of human event.†

Indeed, that is the best way to describe it: Lumet's films feel vibrant and alive and urgent in a way that relatively few films do. There is an intelligence and moral purpose behind them, yet they almost never come off as preachy or pedantic. They are tightly crafted, cleverly scripted, and loaded with tension and pathos. They are, in short, gripping films for thinking adults -- the kind of films Hollywood can and should make more often. 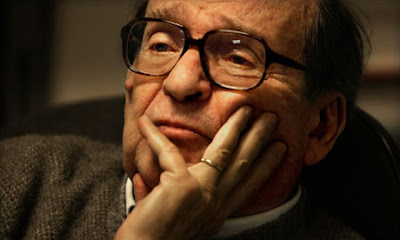 
Lumet refuses to make films that as a group fall easily into categories. Of course, facile categories and theories make headlines, and so the Godards gain more fame than the Frankenheimers, even though work without such theoretical embellishment may possess the greater excellence.††

I don't entirely agree with Cunningham's pooh-poohing of Godard -- or, by extension, of other directors whose work is genre-based and/or "theoretically embellished" by which I assume he means more self-reflexive and/or formally experimental. That said, I take his point that many critics and cinephiles lavish more attention and praise upon the work of filmmakers with flashier, more easily detectable directorial flourishes. Ultimately, I am in total accord with Cunningham in wanting to laud the work of directors like Lumet -- ones like William Wyler, Michael Curtiz, and Hal Ashby -- who are more subtle in their filmmaking craft and therefore trickier to pin down. 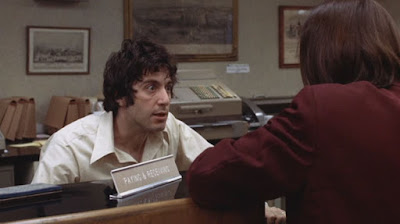 Bonus Afterthought: Cunningham places 12 Angry Men alongside Long Day's Journey Into Night (1962), Fail Safe (1964), and The Pawnbroker, calling these Lumet efforts "four of the culture's most distinguished films." (p. 1). I agree with him about Pawnbroker, however, for me, the other Lumet essentials beyond 12 Angry Men also include Dog Day Afternoon (1975), Network (1976), and The Verdict (1982). Of those, I think Dog Day Afternoon is the single most essential and best -- it is a great thriller, driven forward by incredible performances by Al Pacino and John Cazale.

Lumet films I want to see but haven't include his final film, Before the Devil Knows You're Dead (2007), and The Fugitive Kind (1960), an overlooked gem starring Marlon Brando discussed at length by John Bailey in the documentary featurette I cited earlier.

Regarding the aforementioned 1997 remake of 12 Angry Men, I've never seen it. It may be very good indeed for all I know. But I seriously doubt it is as technically and dramatically marvelous as Lumet's lean-and-mean rendition.

--
* Of course in Mr. Smith the title character is a senator, not a lawyer, and the drama takes place on the senate floor, yet the film's structure and the content of its pivotal scenes aligns it with the courtroom drama.
** I am not engaging upon this "Alternative Top 100" project in a particularly methodical or organized fashion. I am not (so far) generating my own alternative list nor am I numbering the entries. I am simply naming some films that I think should be on any legitimate list of this kind. See my second footnote here if you want an idea about which titles I would cut from EW's list to make room for my alternative selections.
*** Bailey's remarks about Kaufman's contributions to 12 Angry Men can be found on Disc Two of the Criterion Collection edition of the film, in a documentary featurette called "On Boris Kaufman." His comments on 12 Angry Men's cinematography start around the twenty minute mark of that feature.
† Cunningham, Sidney Lumet: Film and Literary Vision (Second Ed.) (U. Press of Kentucky, 2001), pp. 109, 119.
†† Cunningham pp. 120-1.
Posted by Carter Soles at 3:47 PM