This is a follow-up to an earlier post about the Canadian single-camera comedy series Trailer Park Boys (2001-present). That previous post operates mostly at the micro level, walking the reader basically beat-by-beat through the first seven seasons of the series. This supplement will elaborate some big-picture thoughts about the broad arc of the series, touch upon a few aspects of its production history, and correct and/or clarify some evaluative statements I made last time around.

Seasons 1-6 of Trailer Park Boys constitute one chapter or era of the series, which we will call the "Cory and Trevor" era. Season 7 is the beginning of the post-Cory and Trevor era. That season's first episode, "I Fuckin' Miss Cory and Trevor," has Ricky and Julian explicitly discussing how much they miss Cory and Trevor, and the blank space left in the season 7 opening credits where Cory Bowles' and Michael Jackson's names formerly appeared seems a sign of how important they were to the series and how much they are missed (whatever on-set acrimonies may have existed). 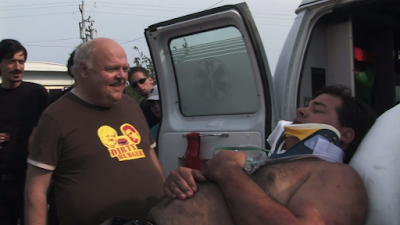 To compensate for the loss of Cory and Trevor, the post-Cory and Trevor era adds new characters, like Don, Donna, and Leslie Dancer, and enhances the roles of certain characters already in the mix, like Phil Collins, Jacob Collins, Sam Losco, and Barb Lahey.* I enjoy the later seasons of the series, and am pleased that Cory comes back, now paired with Jacob Collins, in season 8. Yet I would never judge a Cory and Trevor purist who wished to pretend that only TPB seasons 1-6 exist. I have considered that stance and it is a beautiful vista, if not ultimately for me.

As Trailer Park Boys progresses, it becomes less mockumentary-ish and more sitcom-ish. It is, from the get-go, a tightly scripted show, but in the early days the "documentary" crew is acknowledged and integrated (and gunshot wounded!) more directly, and the show's situations feel more impromptu and chaotic. In later seasons, definitely from season 5 onward, the plots and situations seem more constructed. For example, season 7's "Three Good Men are Dead" breaks the mockumentary conceit completely: the perpetrators of the crime launching the episode would have taken out the camera crew to protect their secret. As "Trevor" actor Michael Jackson suggests, maybe the Steve French mountain lion episode in season 4 is a key harbinger of the series' later feel. 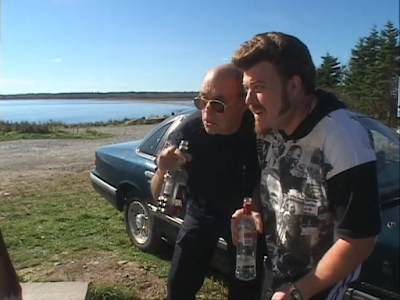 Lahey and Ricky team up (!) for the season 6 finale
"Gimme My Fucking Money or Randy's Dead!"

Season 6 is one of the flat-out best seasons of Trailer Park Boys and it functions as an ideal ending point to the series' first era. Cory and Trevor go out on a high note, earning Ricky's gratitude for how well they set up his latest grow operation, and Ricky's season finale voice-over wrap-up is enormously satisfying. In contrast, the longer montage that closes season 7 is more touching and sentimental, yet it mostly just rehashes the same ideas the previous season's closer works through more nimbly.

Some of the new characters get to shine brighter in the new Netflix - Swearnet seasons, providing a welcome change of pace from the series' usual focus on Ricky, Bubbles, and Julian. I particularly enjoy Don and Donna in season 8, and the whole Donna - Barb - Sarah friendship that develops in season 9. 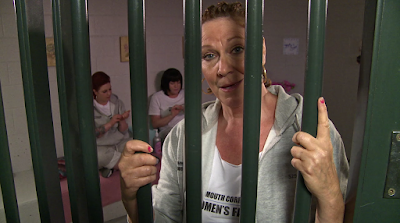 Some of the best overall episodes not named on my previous post's top-six list include "The Cheeseburger Picnic," which features Lahey's best-ever "drunken" appearance at a public event in Sunnyvale; "I Banged Lucy and Knocked Her Up . . . No Big Deal," which has a great opening vignette introducing "Scrilla Villa" and, near episode's end, Randy's terrific parting speech as he is thrown out by Lahey and Barb; "Three Good Men Are Dead," with its awesome vengeance plot; and "Jump The Cheeseburger," whose true high point is Barb Lahey's bullhorn-enhanced soliloquy during her argument with Jim. 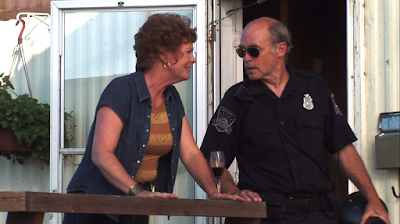 In the new, Netflix-produced seasons, I would single out as two of the best episodes "Friends with the Benedicts," during which Bubbles freaks out in a public laundromat, and "Piss," in which Ricky catapults piss-jugs into Sunnyvale. The puppet show in "Community Service and a Boner Made with Love" is also quite hilarious.** 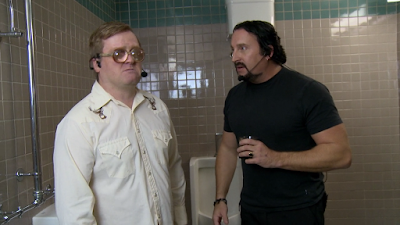 "How do you fuck puppets up?" Julian asks Bubbles fatefully.

And though I mentioned it favorably in the earlier review, I erroneously forgot to place "Where the Fuck is Randy's Barbecue?" on the list of most essential episodes.

So, my revised list of Twelve Most Essential Trailer Park Boys Episodes consists of: 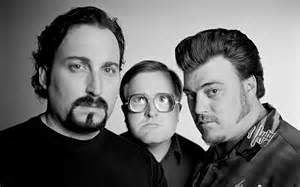 --
* Technically Phil Collins appears several times prior to his rise to regular-supporting-cast status in season 7. But he is not named in most of those earlier episodes -- he is usually just some guy who runs a hotel, drives a cab, etc.
** Since writing that earlier post, I have seen the Trailer Park Boys perform live in Buffalo, NY. Their stage show is quite funny, though less tightly structured than the average episode. The moment from "Community Service and a Boner Made with Love" in which Julian and Ricky vanish for awhile, leaving Bubbles onstage alone, reminds me of parts of their holiday-themed stage show.
Posted by Carter Soles at 4:12 PM