The Reef vs. Open Water 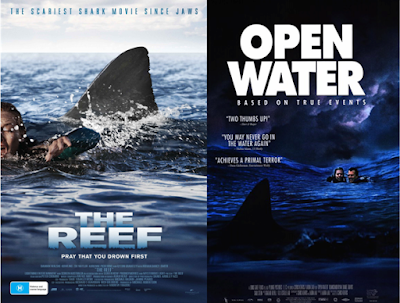 If you're like me, then sometimes, just to relax, you need to kick back with a good "revenge of nature" horror movie featuring sharks. I am a big fan of this genre, and while I do not watch every single shark attack film out there, and mostly avoid documentaries about sharks, I am always on the lookout for quality fiction films in which a bunch of poor bastards get stalked, terrorized, killed, and eaten by sharks.

Obviously, Jaws is the greatest of all such films and I have gone on record as a defender of its sequels as well.

Here I wish to talk about two lower-budget revenge-of-shark films that I find particularly enjoyable.* I started out thinking I would write this review solely about The Reef (2010, Australia, dir. Andrew Traucki), which is one of my favorites, but in the name of balanced reportage I decided to re-watch Open Water (2003, USA, dir. Chris Kentis), a movie that always "hangs together" with The Reef in my mind. Open Water was much better than I remembered it being so I decided to include it in my discussion.

I should mention that despite the post's catchy title, the pairing of The Reef with Open Water is not intended as a "versus" in the confrontational or competitive sense, but simply as a comparison of the two films -- in the end, I really like and recommend both movies, for different reasons. 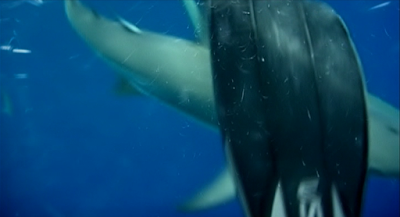 One of the more frightening bits of underwater cinematography from Open Water.

First things first: The Reef and Open Water both do very well with their shark photography, making it feel like the sharks and their victims share real space together. I appreciate that both films use footage of real sharks rather than depend upon CGI. I think the shark imagery may be slightly better in The Reef, if only because the film allows us to really see the shark up close several times in moderately long takes. By contrast, Open Water uses shakier handheld camera shots and quick cuts to give us only very brief glimpses of the sharks. While I like how some of these quick shots are framed, they get a bit maddening after awhile. As one disgruntled reviewer complains:


Open Water's "what's lurking beneath" technique is drastically overused. The "lurking" never pays off. One becomes numb to it. Just eat them, for crying out loud.

While Open Water's coyness about showing its sharks aligns it with some of the greats of the genre including Jaws, the film indeed lacks the pulse-pounding climactic payoff of its bigger-budgeted genre-mates. Given the movie's overall tone, I like Open Water's ending, both for its bleakness and for its homage to a key shot from Jaws' opening moments, yet I understand why folks like Box Office Mojo's Lane Ford find Open Water slow-moving and unsuspenseful. 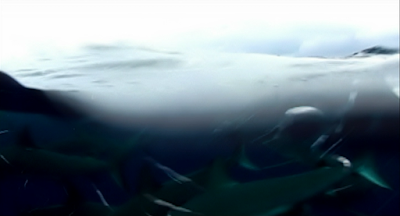 While well-composed, Open Water's quick glimpses of sharks under the surface . . .

. . . are not quite as horrifying as seeing the shark up close and personal in a sustained shot, as in The Reef.

Open Water's deliberate pace is bound up with its inclusion of many elements that are not common to other sharks-murder-humans-type movies. The tension between protagonists Susan and Daniel introduces an "indie"-film edge to the story's central relationship. The nighttime storm sequence is shot quite daringly and artfully: it repeatedly cuts to pitch black screens. And at several points along the way (mostly in the beginning) Open Water goes into arty montage sequences of wildlife and landscape that feel imported from a Werner Herzog film and/or the opening sequence of City of God. I am not complaining about these elements, I actually appreciate them and the existential seriousness and visual beauty they bring to the proceedings. Nevertheless, they take Open Water slightly outside "kick back and watch sharks kill people and have a good time" territory.

In contrast, The Reef maintains a warm, light tone and fast pace. In The Reef, everyone starts off as friends and even Kate and Luke move from uncertain and tentative to clearly romantically interested in each other quite swiftly. The Reef emphasizes hope and love, with no heavy, existential darkness like that of Open Water's night storm sequence accompanied by Susan's fervent praying. No, the only darkness in The Reef is materially inconvenient, baldly terrifying darkness like that which Luke encounters as he looks for supplies inside the flooded cabin of an overturned sailboat.

The Reef's Luke looks for gear in the flooded interior of the overturned sailboat Boomerang -- in terrifying pitch-darkness.

Broadly speaking, Open Water is about how modern bureaucracy, white peoples' need for cheap tourism, and lack of personal connections between married people lead to mistakes that destroy us, then we get eaten by sharks, whereas The Reef is about bonding with friends and relatives, mending past relationships and discovering rekindled love, then we get eaten by sharks.

Interestingly, both films claim to be based upon true events, always a proposition to be treated dubiously when it comes to commercially produced fiction films. Yet Open Water in particular features several homages to Jaws: the clanging of the buoy bell, the film's last shot, and the surnames of its two protagonists, Susan Watkins and Daniel Kintner. These touches belie the film's claims to truth but are quite enjoyable. 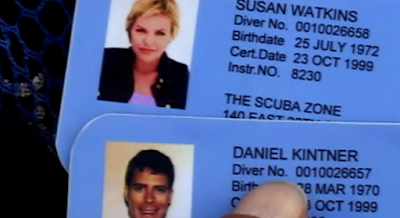 Despite their differences in style -- The Reef is pure low-budget suspense thriller whereas Open Water is more serious-minded and artsy -- both films convey their character-building and story development moments effectively. The Reef lays out the group dynamics of its five principal characters immediately, diving right into the matter of Kate and Luke's past romantic relationship. Similarly, Open Water opens with deft scenes illustrating subtle tension between Dan and Susan, and later on, the means by which the couple gets left behind by the diving company is made very clear over the course of two or three brief, momentary sequences.

The Reef gets its early character-building moments, like this one between romantic leads Luke (Damian Walshe-Howling) and Kate (Zoe Naylor), really spot-on.

While this may reveal me to be too much a child of the 1980s, I love The Reef's soundtrack. Its main theme sounds like a nuanced version of something John Carpenter might have composed for one of his horror films in his heyday, and the "sailing theme" is a mellow piece that sounds similar to a Sade backing track. Open Water's score is more ominous and overblown than it needs to be, overselling many moments that would be more effective selling themselves. But though I don't enjoy Open Water's score quite as much, I suppose it suits the overall darker tone of the film.

It's hard to tell from this still, but this is part of a really nice, swooping helicopter shot during one of The Reef's sailing montages.

In the end, The Reef, with its more straightforward genre-embracing pleasures, has more re-watch value for me. It is suspenseful and scary, and I like the main characters more than I do the couple in Open Water, therefore more is at stake for me. I really want The Reef's Luke and Kate to survive their ordeal with the Great White and make it back to land together. By contrast, in Open Water I think the pleasure comes from the other direction: I don't like the protagonist couple very much so I sadistically root for the sharks. Open Water's Susan gradually becomes more noble and relatable as the story transpires, but I never really like or care about Daniel, which lowers the stakes for me a little.

To sum up, I enjoy both these films, but maybe it says something that while I appreciated Open Water this time out -- only my second time viewing it since the mid-2000s -- I possess my own copy of The Reef and have seen it at least four or five times. And I will probably watch it several more times before I return to Open Water again.